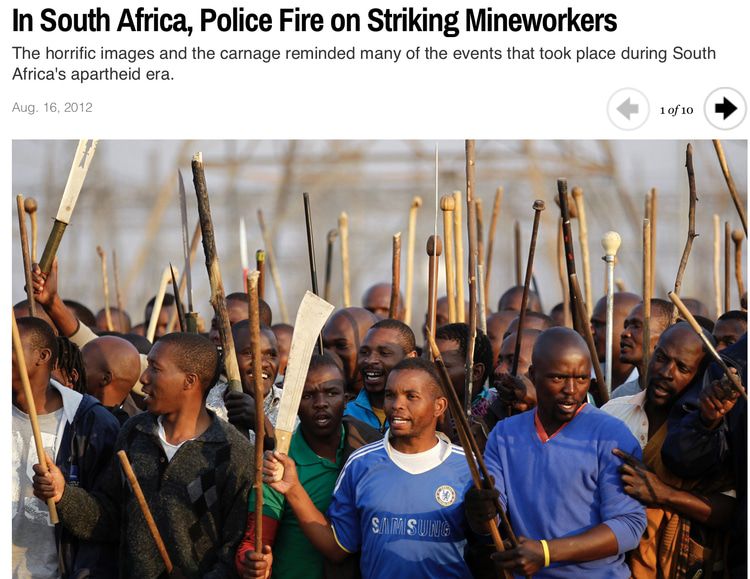 More On The Non-Sharpeville Massacre In South Africa

In August, I wrote about 34 black South African strikers who got shot to death by black South African police, to the accompaniment of none of the international condemnation that accompanied the “Sharpeville Massacre”, the 1960 incident in which outnumbered police shot 69 peaceful demonstrators/rioters who were unarmed/throwing stones—an incident caused by panic (or legitimate fear) by outnumbered police/racism. (There are two sides to Sharpeville, pick which one you want to believe.)

That’s because the police didn’t shoot—and four white and five black policemen were killed and mutilated.

All the policemen in the picture below are black—and alive. 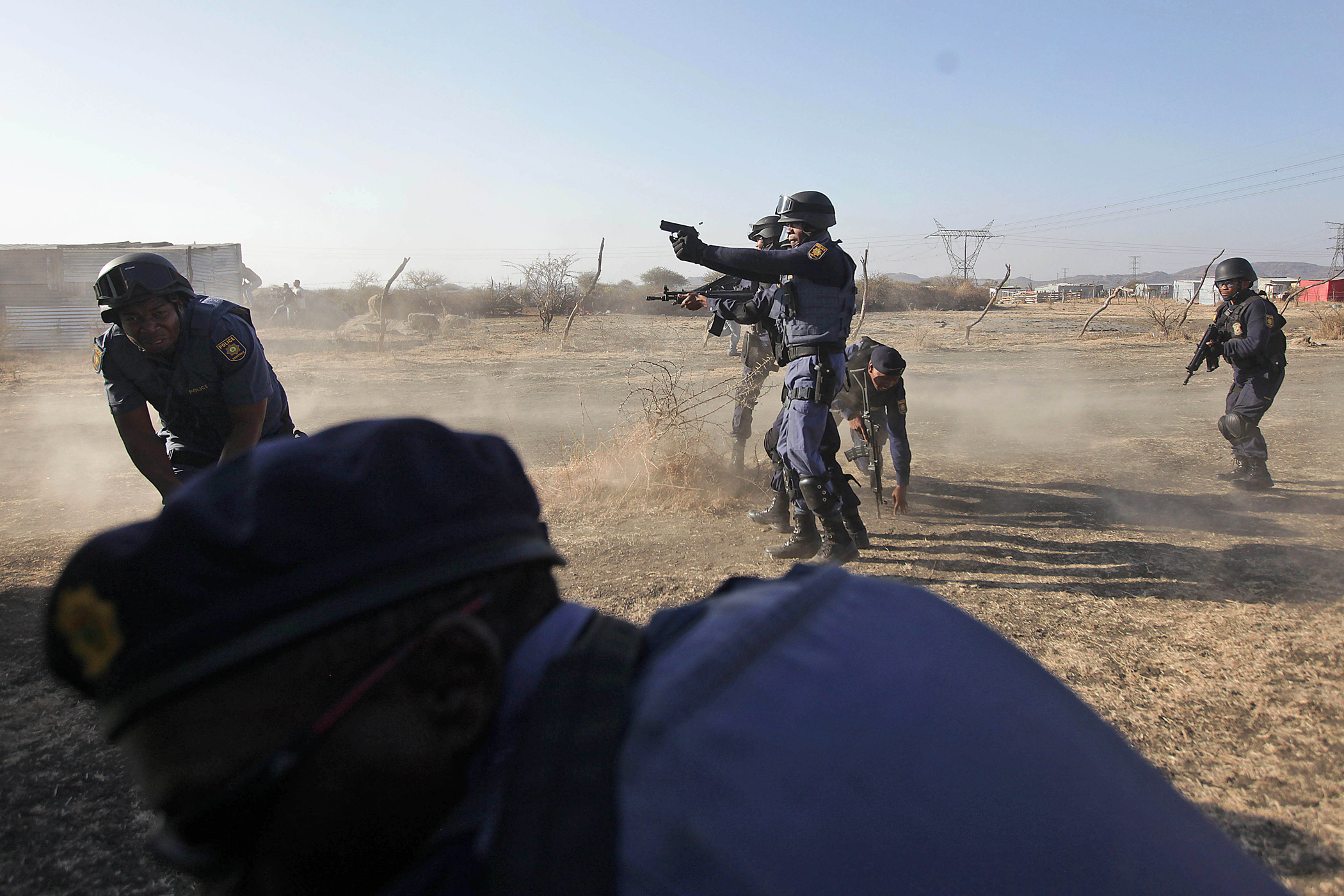 Here's an update: the surviving miners were charged with murder, under what the Guardian called an "obscure apartheid-era law". It's amazing how "apartheid" creeps into stories about black rioters killed by black police in a black ruled country.

The obscure law is, of course, the same thing that Anglo-American law calls the "felony murder rule", in which surviving conspirators can be charged with murder if their accomplices are killed in the course of a felony.

(Accomplices would be a better word than colleagues in the headline below.)

The 270 miners arrested during violent strikes in South Africa have been charged with the murder of their 34 colleagues who were shot dead by police.

The murder charge – and associated charges for the attempted murder of 78 miners injured at the Marikana mine near Johannesburg – was brought by the national prosecuting authority under an obscure Roman-Dutch common law previously used by the apartheid government.

The move came as the men appeared in court charged with public violence over the clashes at the Lonmin platinum mine on 16 August when striking miners armed with clubs, machetes and at least one gun allegedly charged police, who opened fire.

Julius Malema, the former African National Congress Youth League leader, who has called for President Jacob Zuma to resign over the "massacre", told supporters of miners outside the courthouse that the charges were "madness".

Malema, who was expelled from the ANC four months ago, said: "The policemen who killed those people are not in custody, not even one of them. This is madness. The whole world saw the policemen kill those people."[More]

Malema was expelled by the ANC not because he's an anti-white racist (see "Kill The F——g Whites" In South Africa—Courtesy of FaceBook) but beccause he's disloyal to the regime. (One of the Party's charges against him was "expressing his own opinon.")

Pat Buchanan mentioned Malema in a column on The Democracy Worshippers:

As we see in Julius Malema, that admirer of Mugabe and 30-year-old firebrand of Mandela's ANC, just convicted of a hate crime for his singing of the anti-apartheid ditty "Shoot the Boer!" who wants to expropriate South Africa's mines and confiscate white farms, racism and tribalism are alive and well in liberated Southern Africa. And democracy is their enabler.

They do have democracy. To a reader who sympathized with the strikers, I wrote

The miners are, for example, beating other miners to death to enforce solidarity. Ten mineworkers have been killed at one mine, not by police. At a considerable cost in blood, treasure, and human life, the South African miners are now living in a "majority-ruled" democracy, where they have the franchise. If they have problems with their government, let them them use their votes, not their pangas and knobkerries.

However, I doubt if Malema agrees with me. He'd probably like to replace current South African democracy with the tradtional "One Man-One Vote" system, in which Malema is The Man, and he has the Vote.

But he won't have the massive international support that the Mandela had, because he's not fighting against a white government.