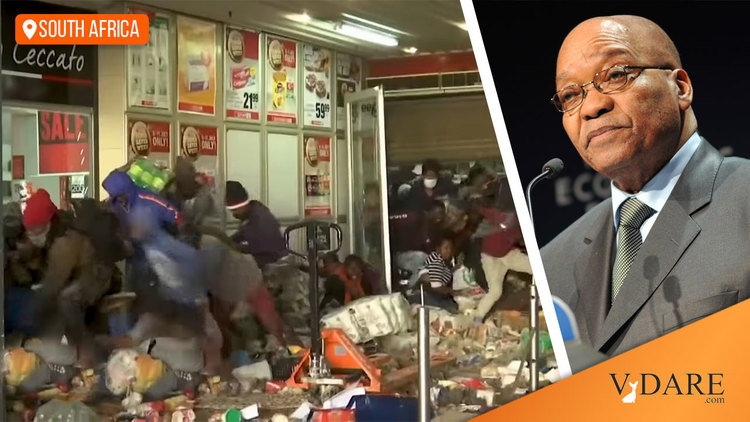 I Am Become Death, Destroyer Of South Africa

The bumptious leader of the Zulu faction within the ruling African National Congress party, Jacob Zuma, got himself kicked out of the presidency for corruption in 2018 and replaced by Cyril Ramaphosa, who, curiously, is much richer than Zuma.

Now the government is putting Zuma in jail and the Zulus are up in arms.

(Bloomberg) — South African taxi drivers, private security companies and ordinary civilians are stepping up to protect their businesses and communities following days of rioting and looting that the authorities have failed to quell.

Protests erupted on July 10, triggered by former President Jacob Zuma’s incarceration on contempt-of-court charges, and quickly degenerated into a free-for-all in the KwaZulu-Natal and Gauteng provinces, two of the country’s main economic hubs. At least 72 people have been killed, making the uprising the deadliest since apartheid ended in 1994. Hundreds of businesses have been ransacked by marauding mobs, and with the police unable to restore order, others are filling the breach.

“Our plan is to make sure that our taxi drivers must protect the malls,” Bafana Magagula, strategy manager for the South African National Taxi Council, said Wednesday by phone. “Any structure that is demolished where large groups of people are working, we are losing, it’s minus, minus. If we don’t protect those structures, at the end of the day we will be out of business.” …

Private security contractors were deployed to guard fuel stations and other key facilities in KwaZulu-Natal. With more than 100 mobile-phone towers destroyed by protesters, the nation’s telecommunications regulator issued a direct plea to communities to help guard communications infrastructure.

… Ramaphosa’s office said he is consulting with the leaders of religious groups, business and political parties on how best to restore stability.

“The National Prosecuting Authority is putting together a team of special prosecutors who have been instructed to oppose bail for suspects associated with public violence and economic sabotage,” it said in a statement late Tuesday.

We wouldn’t want to be like those feckless Soros DAs in the U.S.

I explained some of the background in Taki’s Magazine in 2018 just before Zuma’s ouster.

The president of South Africa, Jacob Zuma, the colorful Zulu polygamist with, at last count, six wives and 21 children, is in trouble with his ruling African National Congress after having fenced much of the country to the Gupta family.

These Indian operators, who moved to South Africa in 1993 to cash in on the end of apartheid, fled to Dubai in 2016, leaving Zuma politically precarious.

The New York Times, for example, lashed out at the antiwhite racism of the Guptas’ phrase “white monopoly capital”:

By the following year, Bell Pottinger was embroiled in a national maelstrom. In TV reports, editorials and public rallies, it stood accused of setting off racial tensions through a furtive campaign built on Twitter bots, hate-filled websites and speeches. All were pushing a highly toxic narrative, namely that whites in South Africa had seized resources and wealth while they deprived blacks of education and jobs. The message was popularized with an incendiary phrase, “white monopoly capital.”

Nobody has yet explained, however, why castigating “white monopoly capital” in South Africa is bad, while demonizing “white privilege” in America is very, very good. …

Why is it so bad to argue against “white monopoly capital” in South Africa but so admirable to excoriate “white privilege” in America?

In contrast, white monopoly capital really is a thing in South Africa, which was home to the world’s most famous monopoly since the 1911 breakup of Standard Oil, the De Beers diamond firm, which was founded by Cecil Rhodes and Alfred Beit. Until De Beers pled guilty to price-fixing in 2004, its executives could not set foot in the U.S. because they would have been arrested for violations of the Sherman Antitrust Act.

De Beers was long controlled by the Oppenheimer family, which got into a public feud with the Guptas a year ago.

A general tip that Zuma failed to follow is not to get on the wrong side of somebody named Oppenheimer:

It’s worth remembering that nearby Zimbabwe bumped along fairly well for its first couple of decades of black rule with the white farmers mostly being allowed to carry on. But then in 2000, a black vs. black political dispute between president Robert Mugabe and his challenger led Mugabe to despoil the whites to pay off his black bully boys.

A similar concern for South Africa has been that a black-on-black political spat could similarly lead to an anti-white surge. Well, we shall see.