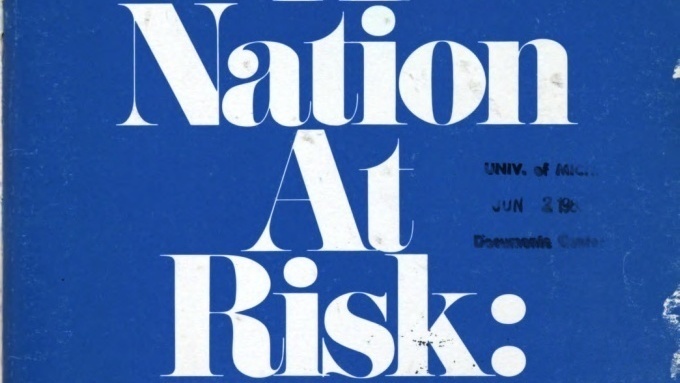 Some Things Don't Change—The Educational Achievement Gap After 25 (or 36!) Years

Saturday was the 25th anniversary of the famous “A Nation at Risk” report issued by the Reagan Administration's Education Department in 1983. It warned:

“… the educational foundations of our society are presently being eroded by a rising tide of mediocrity that threatens our very future as a Nation and a people.”

Ever since, we've been deluged with news stories about school reform.

And what has been the tangible result of this quarter century of tumultuous effort and vast expense (including nearly doubling the amount spent annually per student in constant dollars)?

I've been following American educational and other social statistics for more than just 25 years—since I was 13 in 1972, 36 long years ago. (See below).

After the turmoil of the 1960s, the last three-dozen years have turned out to be The Age of Few Surprises. Over that time, the high school dropout rate has gotten a little worse, the racial gaps haven't changed much, we still trail affluent East Asian countries (there are just a lot more of them now), and so forth and so on.

In short, the rising tide of mediocrity hasn't receded; and may well have kept rising.

Apparently, what the schools do matters less in the big picture than who the students are. And the quality of students arriving at schools hasn't improved.

The basic trends and patterns of American society that I first noticed as a 9th grader are still with us, just magnified by subsequent demographic change. The future turned out to be foreseeable, for the few who cared to notice back in the 1970s.

Why did I spend the fall of 1972 reading social science reports? The national high school debate topic was the financing of public schools. Most teams argued, when they were on the Affirmative, that the federal government should take over the schools, and fund them all equally lavishly.

As a new 9th grader looking for evidence to use in the debates, I read through the many studies that had been begun during the liberal 1960s on the value of more spending in narrowing educational disparities.

That was an era when a sure-fire applause line on a talk show was, “If we can put a man on the moon, we can certainly [fill in massive liberal social engineering project].”

Yet, as I sat in the high school library during the Nixon-McGovern campaign, reading up on the research, I discovered that the most sophisticated studies showed that differences in school performance had more to do with the quality of students enrolled in the school than with the money spent on them or other measurable inputs.

The most famous example: Johnson Administration had commissioned sociologist James S. Coleman to head a huge project to provide statistical support for the Great Society faith that poor children would be lifted from poverty by increased spending.

Coleman surveyed the sprawling diversity of school systems in the U.S. and came up with a conclusion that was so shocking to the conventional wisdom that the Johnson Administration finally released the report late on the afternoon of July 3, 1966 in order to minimize media coverage: The Coleman Report found that family background mattered more than schools.

(And the Johnson ploy didn't work in one momentous respect: years later, Richard J. Herrnstein told Forbes' Peter Brimelow that a television news item about the Coleman Report was the “flashbulb moment” thatgot him thinking about the genetic component in IQ, leading ultimately to his co-authoring The Bell Curve.)

In 1972, Northwestern sociologist Christopher Jencks made a splash with his book Inequality: A Reassessment of the Effect of Family and Schooling in America.

(Jencks is now at Harvard, and has become perhaps the leading critic of illegal immigration on the academic left.) It reaffirmed most of Coleman's discoveries, but usefully emphasized the large role of luck, personality, and other unpredictables in determining success in life.

A review by Leon Todd on Amazon.com summarizes some of Jencks' 1972 findings:

“… it is probably wiser to define a “good” school in terms of student body characteristics than in terms of its budget or school resources. According to Jencks, once a good school starts taking in “undesirable” students (the definition of desirable sometimes pertains to academic, social, or economic attributes), its academic standing automatically declines. He concluded that while an elementary schools' social composition had only a moderate effect on student's cognitive achievement, secondary or high school social composition had a significant effect on achievement. … The type of friends students are likely to make, the values they are exposed to, and satisfaction or dissatisfaction with the school, are all dependent upon the character of the student body. ”

This all made sense to me at age 13. I could see it in my own life.

I was attending a then down-at-the-heels Catholic boys' high school. The tuition was only $600 per year and the school accepted a large majority of students who took its entrance exam. Still, those two barriers to entry made the atmosphere much more academic than that of the public school a block away where I'd attended summer school the two previous years.

I can't say I spread my newfound enthusiasm for statistical meta-analysis to too many of my high school classmates. And yet—and believe me when I tell you that this is important at age 13—they weren't stuffing my head in the toilet for talking about it.

In fact, I was reasonably popular. My eccentricities were tolerated and even mildly encouraged. (I imagine, by the way, that attending a single sex school made my nerdish obsession with social science more acceptable than it would have been in the social maelstrom of a coed school. But that's another article!)

Professor Jencks noted that the data showed that liberalism's key assumption—that equal opportunity would lead to equal results—was wrong. Therefore, Jencks argued, we must have socialism. (That was a fairly original argument at the time, as it remains today).

“Unlike his fellow socialists, Jencks no longer believes that inequality of results is the product of unequal social opportunity. He realizes that equal opportunity and advancement according to merit produce unequal incomes. Wherefore he urges that this most American (and constitutional) of ideas be abandoned, for he wants equality of results, even if it can be achieved only by making opportunity unequal. After all, it is luck rather than merit that determines results, and luck has no moral weight. Beyond this assertion (which has already been questioned), Jencks makes no serious attempt to justify morally his brand of equality. He simply assumes that we are all agreed…

“As P. T. Bauer has pointed out, 'income distribution' suggests a fixed stock of income which the government is to distribute and which (discovered by luck?) is independent of the continuous work of those who earn it. Indeed Jencks feels that, since chance distributes income unequally, the government should be '…responsible…for its [more equal] distribution.' However, the government does not produce the income Jencks wants it to distribute. Nor does chance. The earners do. There is no stock of income to be distributed; only a flow produced by those who earn it. That much is certain (economically) even if one doubts (morally) that the earners deserve to get what they earn.

[The Tortured Search for the Cause of Inequality, (Pay archive) National Review, February 16, 1973]

My first published bit of writing was a letter-to-the-editor [March 16, 1973, Pay archive] in National Review that winter of 1972-73 responding to van den Haag's article about Jencks' big study. I wrote:

Having read Ernest van den Haag's article on Christopher Jencks, I am reminded of an old psychiatry joke: A psychotic (egalitarian, in this little morality story) says. “All people are equal, and I'll fight anyone who says I'm wrong.” A neurotic (Jencks) says, “People aren't equal, and I just can't stand it.”

Now that I think about it, that one paragraph foreshadowed several million words I've written since.

I guess I've been stuck in an intellectual rut ever since I was 13.

Still, unlike an awful lot of writers, my particular intellectual rut has resulted in me not being surprised very much.