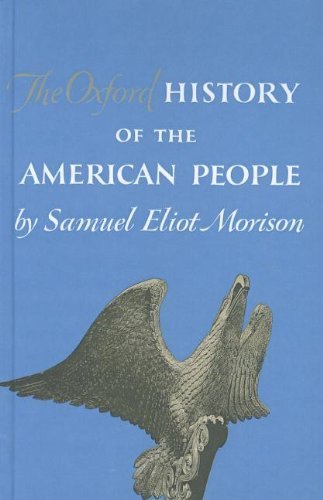 As I've been rereading Professor Admiral Samuel Eliot Morison's three-volume Oxford History of the American People from 1964, I've been thinking about the old Protestant Establishment.

Morison (1887-1976) was himself a leading member of the Protestant Establishment (liberal Boston Brahmin wing). His extraordinary career as a Pulitzer Prize-winning Harvard historian (for his biography of Columbus, Admiral of the Ocean Sea, for which he had organized a research expedition by sailing ship from Spain to the New World) turned middle-aged fighting naval officer exemplifies how an old-fashioned Establishment that self-confidently viewed itself as holding its country in trust for its posterity felt it ought to behave.

Of course, you aren't supposed to think like that anymore. Hence, the top people now treat America like a short-term transaction rather than a long-term investment.

I was reminded of Morison when I read neoconservative David Brooks's thoughtful February 18th New York Times column, The Power Elite, about the historic shift in clout from what he calls the “inbred” Protestant Establishment to what he somewhat deceptively designates as the new “meritocratic” elite:

“Sixty years ago, the upper echelons were dominated by what E. Digby Baltzell called The Protestant Establishment and C. Wright Mills called The Power Elite. … Since then, we have opened up opportunities for women, African-Americans, Jews, Italians, Poles, Hispanics and members of many other groups.”

(As I wrote at the time, what Brooks is really talking about is the rise of the Jews. For example, Jews make up a mere 2% of the population, but 35% of the 2009 Forbes 400 and half of the 2009 Atlantic 50 ranking of the most influential pundits. That's a lot more “inbred” that the Protestant Establishment—perhaps 60% of Americans were white Protestants in 1910. Indeed, even as late as the 2008 Presidential election, white Protestants cast some 42% of the votes. They went overwhelmingly for McCain.)

And, according to Brooks, it's not even clear that this more “smart and hard-working” new elite is actually providing us with better leadership:

“Fifty years ago, the financial world was dominated by well-connected blue bloods who drank at lunch and played golf in the afternoons. … Yet would we say that banks are performing more ably than they were a half-century ago?”

According to Brooks, one reason is that

“[T]ime horizons have shrunk. If you were an old blue blood, you traced your lineage back centuries, and there was a decent chance that you'd hand your company down to members of your clan. That subtly encouraged long-term thinking. Now people respond to ever-faster performance criteria—daily stock prices or tracking polls.”

This now obsolescent multigenerational perspective inspired the central scene in the 2006 period movie about an uber-WASP CIA agent played by Matt Damon, The Good Shepherd, which was directed by Robert De Niro and scripted by Eric Roth. In a 1961 conversation between with a mafia don (played by De Niro's old buddy Joe Pesci), Roth's dialogue spelled out even more graphically than Brooks' column the new elites' combination of resentment toward and grudging respect for the past's Protestant Establishment:

Edward Wilson: “We have the United States of America. The rest of you are just visiting.”

Morison, the last Harvard professor to ride his horse to work, embodied that sense of long-term responsibility. At the time of Pearl Harbor, he was 54-years-old. The U.S. Navy's history website reports:

“Shortly after the United States entered World War II, Dr. Morison proposed to his friend President Roosevelt to write the operational history of the US Navy from the inside, by taking part in operations and writing them up afterwards.”

FDR, a fellow yachtsman, agreed. Morison (who had previously left his Harvard professorship to be a private in the U.S. Army during WWI) spent much of WWII in combat zones, such as off Okinawa during the kamikaze attacks, as an aged naval officer. The Navy promoted Morison to Rear Admiral upon his retirement in 1951. This gives his 15-volume official history of the U.S. Navy in WWII particular intensity and empathy. 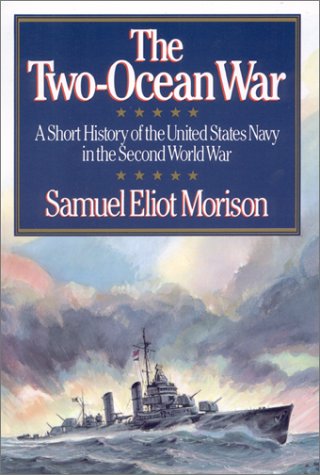 For example, Morison writes in his one-volume summary, The Two-Ocean War, of the night Battle of Kolombangara. Admiral Walden W. Ainsworth, holding his fire because he was uncertain if the blips on the radar screen were friendly or unfriendly, allowed Japanese destroyers to close enough to launch torpedoes that struck three of his ships: "I was in the flag plot with him, seeing and feeling the agony of decision …"

Was the Protestant Establishment as homogenous and inbred as 21st Century Jewish writers like Brooks and Roth tend to assume?

Not on the evidence of Morison's Oxford History, which is largely devoted to chronicling struggles between WASPs–such as Jefferson v. Hamilton, North v. South, and Robber Barons v. Progressives v. Populists.

The reality is that a country doesn't particularly need ethnic diversity to have ideological diversity. Indeed, ethnic diversity often short-circuits disinterested intellectual diversity, channeling every thought into a Who? Whom? rut. As Singapore's Lee Kwan Yew observed, "In multiracial societies, you don't vote in accordance with your economic interests and social interests, you vote in accordance with race and religion."

Written at the high water mark of liberalism in 1964, Morison's Oxford History celebrates the triumph of liberalism / progressivism, of what Morison called his own "Jefferson-Jackson-F.D. Roosevelt line" over noveau riche businessmen and other benighted interests.

Strikingly, Morison's history matter-of-factly treats immigration restriction as an issue highly popular with his own Progressive / labor / populist left-of-center alliance. He writes of the now-sacrosanct Ellis Island years: “One basic cause of the laborer's standstill [in wages] was unrestricted immigration … Their competition kept wages low and hampered the unions' attempts to organize…”

Since 1964, of course, the history of the long struggle for immigration limitations has been rewritten to fit the new elites' ethnic preconceptions.

The manufacturing elite tended to be open to hard-charging Protestant farm boys whose mechanical genius overcame their obscure backgrounds. Henry Ford is the most obvious example.

But America's liberal intellectual / social reformer elites tended to come from a well-bred caste, much as in Britain where a striking number of the Liberal Party's leading thinkers originated in a small number of families, such as the Darwins, Huxleys, Keyneses, Arnolds, Wedgwoods, and Millses.

Samuel Eliot Morison's middle name reflected his mother's maiden name. The Eliots were one of the most prominent clans of American intellectuals. Morison was aware of the usual charges of snobbishness and inbreeding, so he argued in 1960 in his New England Quarterly that at least compared to the other Boston Brahmins

“…the Eliots, however, were never a close family corporation like the Cabots, Adamses or Lowells. They did not marry within the family group or attempt to bring up their children together or live in the same city block.”

The Eliots were descended from Andrew Eliot, who moved to Boston in the 1660s from the English village of East Coker. The most famous of this Andrew Eliot's direct male-line descendants, the poet T.S. Eliot, entitled the second of his Four Quartets "East Coker." It begins: "In my beginning is my end" and ends, "In my end is my beginning".

T.S. Eliot was a rare conservative among the progressive American Eliots. Samuel Eliot Morison's great uncles included Charles W. Eliot, the president of Harvard from 1869-1909 and perhaps the most important figure in its history, and Charles Eliot Norton, one of the Republic's most celebrated idealists and men of letters. In a profile of Norton, Morison shed some light on the origins of American intellectual liberalism as an Old Money phenomenon:

“Charles Eliot Norton … was first cousin to Charles William Eliot, President of Harvard University, and to my grandfather Samuel Eliot, who for a few years presided over Trinity College, Hartford. The Nortons belonged to the New England 'Brahmin caste' of scholars and divines; … Samuel Eliot, a Boston merchant who lived largely in the eighteenth century, made a fortune as a merchant-importer, but also became a patron of learning. He endowed a chair of Greek literature at Harvard College, probably at the suggestion of his cousin the Reverend Andrew Eliot, from whom T.S. Eliot is descended.”

As far back as the early 19th Century, the Eliots had chosen socially conscious uplift over business:

“Even before Samuel Eliot died, in 1820, the 'North End Eliots' decided that they had made enough money, and, like other old Boston families, devoted themselves largely to learning, education, and various good causes. …”

To Morison, American liberalism was invented by his ancestors, the descendants of the Puritans. As he made clear in his Oxford History, rudimentary versions of most American progressive movements, including civil rights for blacks, feminism, and the rudiments of the ideology of environmentalism (Thoreau's Walden), were up and running in the greater Boston area by the 1840s.

In other words, American liberalism was invented by the oldest and most socially respectable hereditary elite in the country's least ethnically diverse region, and imposed from the top down.

Is that a good thing or a bad thing?

Perhaps, as the ever-diplomatic Chou En-lai famously said of the French Revolution, it's too early to tell. But it's clearly a thing that ought to be kept in mind.

Morison died in the spring of 1976 at age 88. Having had just finished reading his Oxford History of the American People for the first time, I was sad that he hadn't lived quite long enough to see the Tall Ships parade in New York Harbor at the Bicentennial on July 4, 1976.

The epitaph Morison chose for himself was "Dream dreams, then write them — aye, but live them first!"