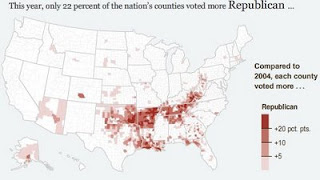 Here's a map by counties, with counties where McCain improved relative to GWB in 2004 the most shown in reddest red.

Before reading onward, can you figure out why this pattern exists?

The pattern should be quite obvious to anybody who has read David Hackett Fischer's Albion's Seed on the four types of Brits in America.

Tennessee, home of Andy Jackson, was the state where McCain improved on Bush's vote the most.

(The other four states in McCain's Most Improved Top Ten are driven by obvious special factors: #2 Louisiana by the decline in number of blacks due to the hurricane; #4 Alaska by Palin's status as a Favorite Daughter; #6 Massachusetts by favorite son John F. Kerry no longer being on the ballot; and #9 Arizona by McCain being a Favorite Son.)

Think how amazing that is. According to Fischer, the main Scots-Irish immigration was finished a couple of hundred years ago. And yet, this heritage lives on in voting behavior eight or more generations later.