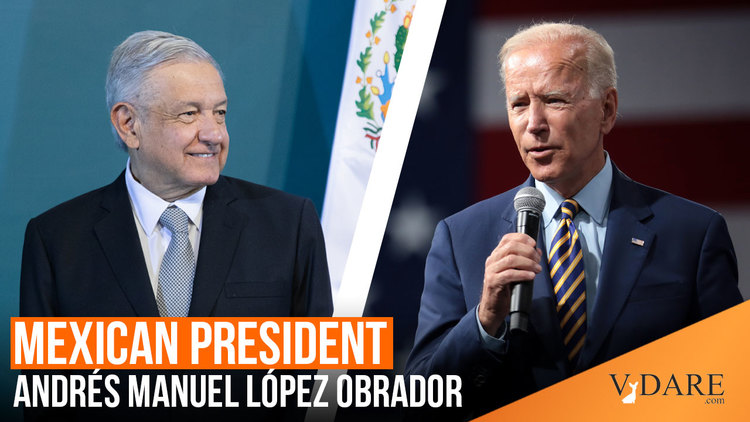 SAID IN SPANISH: With Biden In, Mexican President AMLO Reverts To Backing Amnesty (And Says Cubans Have Too Much Power!)

What a difference a new president makes! When they were both presidents of their respective countries, Mexican President Andres Manuel Lopez Obrador (AMLO) openly complimented U.S. President Donald J. Trump, never spoke an ill word of him, and helped reduce Central American “migrants” using Mexico as a corridor. Better yet, he didn’t meddle in U.S. politics. But now that Joe Biden is president, AMLO is reverting to Mexico’s old ways—the Meddling Model so beloved of other Mexican presidents.

True, AMLO has agreed to Biden’s recent reversion to a form of Remain in Mexico, the Trump-era policy that kept so-called asylum seekers on the other side of the border while U.S. officials heard their cases. Recently, AMLO even said that “it’s a program that is going to continue permitting us to take care of the migrants” [Conferencia de prensa del presidente Andrés Manuel López Obrador del 10 de diciembre de 2021 (“Press Conference of President Andres Manuel Lopez Obrador of December 10, 2021”), Gob.mx, December 10, 2021].

Yet while Mexico continues to detain some illegal aliens passing through its territory, which is good for us, the Open Borders Biden Regime’s push for an Amnesty has provoked AMLO to meddle in U.S. politics on behalf of Mexican illegals here. As VDARE.com readers know, Mexican officials have long considered all Americans of Mexican ancestry to be Mexicans.

This is very dangerous with Biden in command. He can be expected to capitulate. As well, Republican leaders seem totally oblivious to Mexican meddling. For example, Republican Governor Kevin Stitt, in the Red State of Oklahoma, eagerly awaits a new Mexican consulate in his state.

Concerning Amnesty, here’s a report of AMLO recently in the border town of Tijuana:

From Tijuana, the president Andres Manuel Lopez Obrador sent an embrace to the paisanos [the fellow countrymen] who live in the United States and reiterated his appreciation for the great help the sending of remittances represents.

The Mexican government loves those remittances, which continue to increase.

But AMLO understands a new sheriff is in town, President Biden, and he isn’t very much like the old one, meaning Donaldus Magnus. So he said:

[I]t is now very clear: We don’t want mistreatment of the Mexicans who are in the United States nor do we want a lack of respect toward Mexico.

That’s funny. During the previous U.S. administration, AMLO said Trump respected Mexico. Now that an Open Borders president is in office, suddenly AMLO’s warning us about American disrespect for his country!

At his presser on December 15, AMLO really got going. A discussion of migration segued into Mexican-Guatemalan relations:

[W]e have a good relationship. And … we are going to follow … and take advantage of the initiative of President Biden to regularize the situation of the migrants. He made an offer to regularize 11 million migrants, the majority Mexican, our fellow countrymen.

Note what the Mexican president said. If an American political party opposes Amnesty, the Mexican government will tell “our fellow Mexicans” in the United States to vote against that party, because to be anti-Amnesty is to be anti-Mexican.

And we all know—AMLO knows—which party he’s talking about: the GOP. If it opposes Amnesty, AMLO will tell Mexicans to vote for Democrats.

Not that the GOP notices. Republicans haven’t taken Mexican meddling seriously before this, and they don’t take it seriously now. Again, look at Oklahoma’s Stitt.

How serious is AMLO about fortifying Mexican political power in the U.S.? Interestingly, he said Cuban influence in U.S. politics is outsized relative to their numbers. AMLO thinks that’s unfair and he doesn’t like it. So he threw his Hispanic co-ethnics from Castroland under the bus:

AMLO ranted briefly about the U.S. trade embargo on Cuba, which he says is “inhumane” and “a flagrant violation of human rights,” but he attributed the policy to “the political power of the 4 million persons of Cuban origin who live and work in the United States and their leaders.”

Yet even his knock at the Cubans is consistent with his remarks about Amnesty, and that Mexican-Americans should punish politicians who oppose it.

He sees neither Cuban-Americans nor Mexican-Americans as Americans with American interests. Instead he sees Cubans and Mexicans in America pursuing their own interests, in competition with each other and with every other group…including (ahem!) Americans.

Bottom line: presidential leadership in this country makes a difference. It even influences the president of Mexico.  Though friendly and cooperative with Trump in office, with Biden in office AMLO is very clear and outspoken about his intention  to maximize the influence of Mexicans in this country over public policy and electoral politics.

But it’s time for immigration patriots and the Historic American Nation to wake up.