The virtual closure of national borders from Central America to the United States because of the Chinese Virus might end the migration of Central America’s poverty-stricken hordes to the United States, but only if the controls stay in place long enough to become settled policy. Mass apprehensions at the border have dropped by more than half. Helping, of course, is the knowledge among illegal aliens, that one might contract the deadly microbe on the trip north, but the border controls are what counts. The virus will pass. Stopping a return to the status quo ante depends on President Trump’s surviving the social and economic upheaval the Asian pathogen has caused, which means Trump—The Sequel must begin on January 20.

With that introduction, some encouraging news:

From March 21 to April 9, border agents deported 10,000 illegal aliens, who are now, of course, almost uniformly called “migrants” or “refugees” [Trump administration has expelled 10,000 migrants at the border during coronavirus outbreak, leaving less than 100 in CBP custody, by Nick Miroff, The Washington Post, April 9, 2020].

“Those who are undocumented or don’t have documents or authorization are turned away,” explained the acting director of Customs and Border Protection, Mark Morgan.

“Migrants” are getting the message: illegal crossings are down 56 percent.

Unsurprisingly, Univision offered the usual sob story about the expulsion policy, about a Mexican named Joel Alexander, who jumped the border on April 8 “looking for work” [“Me montaron en un carro y me tiraron para México”: las deportaciones exprés en tiempos de covid-19 (“‘They Put me in a Car and Threw me over to Mexico’: Express Deportations in the Times of Covid-19”), by Jorge Cancino, Univision, April, 12, 2020].

Poor Joel “spent two days hidden among scrub thickets protecting himself from the rain” until a group of border agents detained and handcuffed him.”

Normally, the arrest would result in a drawn-out process that ended in Joel’s release into the country and his not showing up for an immigration hearing. Not this time. 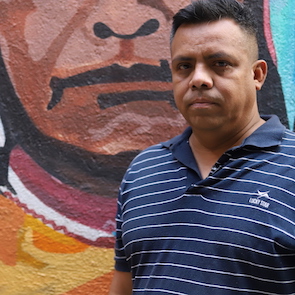 “They just put me in a car and threw me over to Mexico,” Joel lamented. “It all lasted less than two hours.”

If that’s an “express deportation,” I’m all for it, as are, in all probability, most Americans!

Not, though, Irineo Mujica, director of the border-busting Pueblo sin Fronteras—People without Borders—who is very perturbed.

“It is terrible,” he said. “Every day, every little bit, they are sending people back … this is a chaos, a disaster.”

Yeah, right. Earth to Irineo: The border was already a disaster, partly thanks to people like you!

In Guatemala, 50-75 percent of a March planeload of deportees reportedly tested positive for COVID-19 [Guatemala: US deportations driving up COVID-19 cases, by Sonia Perez D., The Associated Press, April 14, 2020].

It's hard to keep up with all this.

But what can help deportations continue to Central American countries?  Well, President Trump threatened visa sanctions in an executive memorandum published on April 10, once again proving that dealing with Central Americans requires a stern hand.

[I]f any government of a foreign country denies or unreasonably delays the acceptance of aliens who are citizens, subjects, nationals, or residents of that country after being asked to accept those aliens, and if such denial or delay is impeding operations of the Department of Homeland Security necessary to respond to the ongoing pandemic caused by SARS-CoV-2 …  the Secretary of State shall as expeditiously as possible, but no later than 7 days after receipt, adopt and initiate a plan to impose the visa sanctions provided for in section 243(d) of the INA.

Guatemalan President Alejandro Giammattei has said the United States is practically  the Wuhan of the region.

If so, then Central American governments should keep their people at home. Then again, how does Giammattei know the migrants didn’t have the virus before they jumped the U.S. border?

Speaking of Giammattei, he’s followed the example of the  the tiff between El Salvador and Mexico in complaining about the way the latter has handled the virus, particularly its “open airports.” He said:

He also complained that Guatemalans deported from the United States to Mexico are paying traffickers to return them home!

And he asked “Guatemalans who live in border communities with Mexico to impede the passage of persons who illegally enter and ‘oblige them to pass through the legal passages, there we can get them and quarantine them.’”

Quarantining deportees would be easier, of course, if they don’t hijack the buses that carry them across the border.

The Guatemalan press reported the bizarre story of a deportees hijacking a bus convoy carrying Guatemalans  (with some Salvadorans and Hondurans) being deported from Mexico.

They were being transported in buses by the INM (Mexican immigration bureaucracy) across the Mexico-Guatemala border into Guatemala, to take them to the city of Quetzaltenango.

So they were on Guatemalan soil but on Mexican government buses, when some of the deportees took control of the buses,  with 190 deportees escaping, and 57 being detained by Guatemalan authorities. [Migrantes deportados de México escapan de autobuses en Retalhuleu (“Migrants Deported from Mexico  Escape from Buses in Retalhuleu”) by Rolando Miranda y Raul Juarez,  Prensa Libre, April 4]

I recently reported that 13,000 non-Mexican migrants were stuck in Tamaulipas, which borders Texas, and that the governor was concerned that migrants might carry and spread the Chinese Virus.

That’s yet another incentive for Mexico to guard its southern border.

The U.S. is hardly the only country in the Western Hemisphere with tightened border controls. [Coronavirus: Travel restrictions, border shutdowns by country, Al Jazeera, April 19].

Though the U.S.-Mexico line is open to “essential” traffic, borders in the Northern Triangle are pretty much shut down.

The rest of the region, except Nicaragua, has done likewise.

The coronavirus crisis, in other words, has provided us with an opportunity to really get control of our border.  Let's not throw away this opportunity.