MEMO FROM MEXICO: Mexico Worries About Catching WuFlu From US! Borders A Good Idea After All?

Earlier: SAID IN SPANISH: Latin America Scrambles To Stop U.S. Globalization From Infecting Them With COVID-19

I write from Mexico, where I have traveled because my mother-in-law died. It’s been a difficult time for our family, not made easier by the global China Virus scare, and we just have to hope the border isn’t closed when we return home. The pathogen began infecting Mexicans in late February about a month after it landed in the United States, and now, with the end of March closing in, Mexico isn’t anywhere close to the U.S. in the number of infected citizens. Still, like everywhere else, infections are spreading, and so Mexican authorities have agreed with Trump on a closure of the US-Mexican border to non-essential travel. [US and Mexico close border to all ‘non-essential travel’ due to coronavirus crisis, TechCrunch, March 20, 2020]

In keeping with what we know about COVID-19 deaths elsewhere—most of those who die have underlying health problems—the first death, Milenio reported, was  a 41-year-old-man with diabetes [Muere primera persona en México por coronavirus (“First Person Dies in Mexico from Coronavirus”) by Blanca Valadez y Jorge Becerril, March 18, 2020].

And so like most countries Mexico is taking measures that greatly affect daily routine.

On Friday, schools in Mexico closed for a month. They typically break for the week before and the week after Easter, but they added two weeks prior to regular vacation [Coronavirus: Mexico closing schools for a month to fight COVID-19 spread, by Daniel Borunda, El Paso Times, March 15, 2020].

San Pedro woke up almost paralyzed this Wednesday [March 18] after Tuesday afternoon, when mayor Miguel Trevino de Hoyos issued an emergency declaration in response to the cases of COVID-19 in this jurisdiction. … Principal avenues and deserted commercial centers with the majority of employees who work there doing “home office” and the residents determined not to leave their houses. San Pedro is the municipality with the largest share of COVID-19 cases in the state. Therefore, the mayor determined upon additional measures, aside from the ones the state government is considering implementing: the closing of casinos, social centers and movie theaters. In the case of San Pedro, the measure was expanded to include gyms, places of worship, bars, cantinas, night clubs and public markets. … [T]he Secretary of Security is authorized to use public force in case someone disobeys the ordinance.

As with their counterparts in the United States, the Conference of Mexican Bishops has recommended the suspension of masses and other public church activities [Episcopado Mexicano recomienda suspender misas (“Mexican Episcopate Recommends Suspension of Masses”), Informador.mx, March 16, 2020].

On March 18, the Diocese of Saltillo canceled Masses beginning on March 23:

The diocese of Saltillo began to apply more severe measures to avoid the spread of COVID-19, among which are the suspension of public masses and celebrations of Semana Santa (Holy Week) beginning March 23 until further notice.

With so few infections relative to the United States, which now counts nearly 20,000 and 275 deaths, no wonder some Mexicans think it’s a smart idea to close the border.

“[T]he closing of borders … is not a situation that would contribute to stopping the epidemic. … If we wall of the northern border and close it with a lock, we would do immense, monumental and colossal damage to the society and economy of both countries. Or if we did the same on the southern border to the countries of the southern border [Guatemala and Belize] it would not be effective in stopping the epidemic: 174 countries and soon 100 per cent of the world is going to have sufficient coronavirus that the disease will be circulating inside their countries.

The AMLO administration now has a daily briefing on coronavirus, although he still gives the impression of not taking the pathogen very seriously. 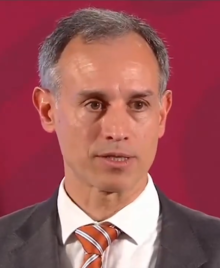 His morning presser on March 16 occasioned a bizarre statement from Lopez-Gatell, right,  an epidemiologist with a degree from Hopkins.

UnoTV’s Dalila Escobar asked if AMLO would be tested for the virus given his travels to poor areas of the country. AMLO said he would follow doctors’ orders, and after that went on a rant against corruption and the non-supportive media.

But he called Lopez-Gatell to say a few words. He said everyone didn’t need testing, and besides, AMLO is healthy and if he contracts the disease will probably recover.

But what if AMLO carried COVID-19 and infected the poor in marginal areas, Escobar asked.

What?! AMLO is a “moral force” but not a “contagious force?” What does that mean? It looks to me like Lopez-Gatell wants to keep his job, but anyway, Mexican pundit Sergio Sarmiento offered a more sober assessment of AMLO’s mystical powers to avoid or spread the infection.

If the president is contagious and maintains his conduct of distributing kisses and hugs, he could infect hundreds or thousands directly. … He would become the biggest propagator of the pandemic. His supposed moral force would avoid nothing. Is this really what the person selected to represent the scientific face of the government in this crisis [Lopez-Batell] wants?

Bottom line: We cannot control or predict exactly how coronavirus will spread, or how Mexico will deal with it internally.

Our borders, however, must still be secured as a matter of principle, not just for the duration of this viral pandemic.