The Chinese Virus continues its march through Mexico. As of Monday March 30, the Johns Hopkins Coronavirus Map reported 993 cases, with 35 recovered and 20 deaths. That’s nearly five times the number  I reported here nine days ago.

Meetings of 100 persons or more and jobs that require a lot of movement are suspended. As well, nonessential government activities are suspended [Gobierno federal suspenderá actividades por coronavirus (“Federal Government to Suspect Activities for Coronavirus”), by Blanca Valadez, Milenio, March 25, 2020].

Though President Andres Manuel Lopez Obrador (AMLO) has been accused of not taking the China Virus seriously, he is working the issue his own way.

Still, despite the much-hyped closing of “nonessential travel” across the border, the president is resisting further restrictions, even though U.S. cases are 145 times greater than Mexico’s.

Indeed, when AMLO participated in the G20 Conference Summit on March 26, he called on fellow G20 leaders not to close borders [AMLO pide a líderes de G20 no cerrar fronteras ni especular con precio de petróleo (“AMLO Asks G20 Leaders Not to Close Borders nor to Speculate with the Price of Petroleum”), by Pedro Dominguez, Milenio, March 26, 2020].

AMLO seems to be slowly coming around, though. He released a video on March 27 telling Mexicans to stay home unless they had to leave their houses unless they really have to [Stay at home, urges López Obrador as Covid-19 cases surge to 717, Mexico News Daily, March 28, 2020]

AMLO might not be determined not to close borders, but some Mexicans are.

On March 25, protesters shut down traffic into Mexico from Nogales, U.S.A. to Nogales, Mexico, for a few hours.

The protesters demanded greater controls and screenings on southbound traffic at the U.S.-Mexico border out of concern that travelers from the U.S. could import new cases of the coronavirus into Mexico. … Some of the signs asked U.S. residents to “stay at home.” Others called on Mexico President Andrés Manuel López Obrador to step up controls and restrictions along the U.S.-Mexico border to contain the spread of COVID-19.

The protesters call themselves Sonorans for Health and Life after the border state of Sonora in which Nogales lies.

“There are no health screenings by the federal government to deal with this pandemic,” spokesman Jose Luis Hernandez was quoted as saying. “That’s why we’re here in Nogales. We’ve taken this action to call on the Mexican President Andrés Manuel López Obrador to act now.”

The group demands “a temporary ban on visits for tourism and minor medical procedures in Mexico for both U.S. citizens as well as Mexicans living in the U.S. The group is asking for Mexican health officials to step up screenings of everybody crossing the border for symptoms of COVID-19.” 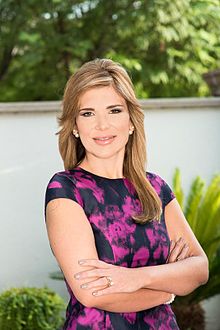 Governor Pavlovich’s measures include the following:

Coronavirus And Mexico’s Rich And Poor

Gov. Luis Miguel Barbosa Huerta of the east-central Mexican state of Puebla attracted attention for what he said, not what he did:

Who are the infected ones now? … The majority are well-off people. … If you are rich, you have the risk (of being infected). If you are poor, you don’t. We poor are immune.

I highly doubt that any Mexican governor is poor, and it’s certainly not true that the poor are “immune.”

But Barbosa is not completely off-base, at least as far as the early stage of the virus in Mexico has gone. The first wave of Mexicans stricken with the China Virus were people with money who were returned from Europe and Vail, Colorado.

Coronovirus And The Mexican Race

That truth raises another questions few wish to discuss: Are some racial groups more prone to catching the Chinese pathogen—and are some races more severely affected when they do?

VDARE’s Lance Welton has been exploring this question in several recent offerings:

Though not identical to the Lance Welton theories, that espoused by the Mexican medical cabinet does look at race as part of the equation.

Salvador Garcia Soto, a columnist for El Universal, says the cabinet discussed Mexico’s racial identity relative to the virus in a recent meeting [Esperan hasta 2 mil muertes por Covid-19 en México (“Up to 2,000 Deaths from Covid-19 Expected in Mexico”), March 23, 2020]. That must mean Garcia has a secret source within the cabinet.

Lopez-Gatell’s Chinese Virus team and some other officials presented an estimate of how many Mexicans they expect to die from coronavirus: as low as 400 and high as 2,000.  They see that as an optimistic scenario, a maximum of 2,000 deaths.

In that report, the cabinet health specialists commented to the president that “genetically, the Mexican race has greater resistance to this type of virus than other races such as the European” and they argued that it has to do with the Mexican genome and with mestizaje [the mixture of Spaniards and Indians which produced Mexico’s mestizo majority].  That’s why they expected that that would influence the impact that the new coronavirus would have among the Mexican population.

Is that analysis correct? I don't know, but it's something to watch for.  Maybe when the virus has run its course we'll have an idea.

Why not compare coronavirus stats on three Mexican groups: the mestizo majority, Mexican Indians and white Mexicans?  The data gleaned from such a study would be good for the future of all three groups.

Speaking of race, remember all the hysteria about calling coronavirus the Chinese Virus?

Guess what a Mexican pinata business in Reynosa, across the border from Hidalgo, Texas, is producing and selling for 600 pesos?

The business is selling coronavirus pinatas.  Each pinata is in the familiar form of the virus with spikes, illustrated with bats and an old-fashioned, stereotypical Chinese face [Realizan piñatas de coronavirus (“Coronavirus Pinatas Made”), by Viviana Cervantes, El Manaña, March 12, 2020].

“We’ve been following the news that has been circulating in all the world of this disease,” the artist was quoted as saying. “When we found out that it had arrived in Mexico we wanted to give it this touch of grace that characterizes us.”

“What we tried to do was represent this virus. We chose the face with slanted eyes and the bats because they say that this animal [the bat] caused it. … We don’t intend to offend anybody. It’s just a way to see the problems that exist with grace.”

Jose Diaz-Briseno, a Reforma correspondent and Columbia University graduate, is not amused:

“Trump’s ‘foreign virus’ speech & this racist Mexican coronavirus piñata have more things in common than one could imagine,” he tweeted.

Trump’s “foreign virus” speech & this racist Mexican coronavirus piñata have more things in common than one could imagine pic.twitter.com/xAk2IbbafC

I guess Diaz-Briseno won’t buy one. But this is not the first time ordinary Mexicans have proved indifferent to American-style Political Correctness.

In 2005, there were complaints in America when Mexico issued a set of stamps commemorating Memin Pinguin, a  stereotypically black comic book character dating back to the 1940s, but still selling 80,000 copies a week well into the 21st century.

This is Memin Pinguin  with a young Chinese friend: 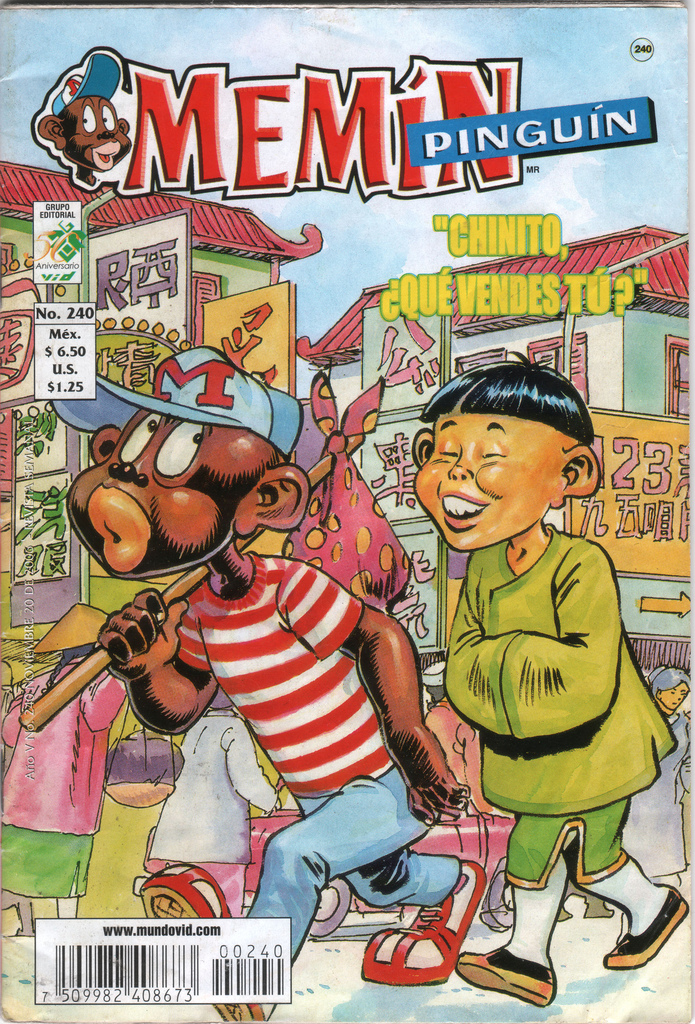 And notice the price box on the left side. These comics have been sold in the United States!