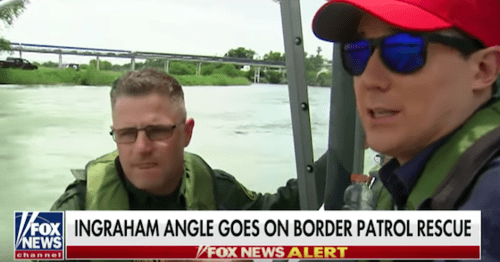 Imagine American parents were inserting their children into a very dangerous situation in order to help commit a crime — US authorities would arrest the adults for child endangerment in a heartbeat.

However when the perps are foreigners in the process of invading America across the Rio Grande, they receive the assistance of Border Patrol agents — in fact, the illegals are rescued and brought to the American side of the river.

On her Monday show on Fox, Laura Ingraham and her sidekick Raymond Arroyo visited the wide open border to see the action first hand.

In one segment, Arroyo rode along on a river boat with Border Patrol agents, as they performed rescues and not much that could be called enforcement. Agent Bryan Kemmett said many of the illegals jumped into the river because they didn’t want to wait to go through the official entrance. 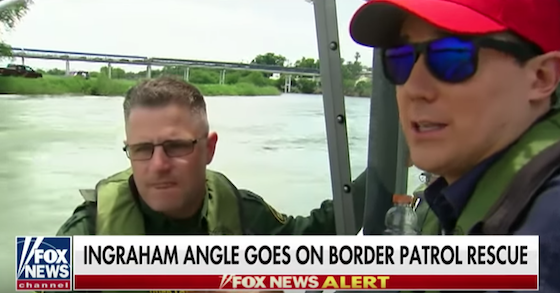 Arroyo suggested that the Border Patrol was incentivizing this behavior with its rescues, but Kemmett said no, they didn’t want to become a ferry service — but that is exactly what’s going on. Illegal aliens couldn’t get a friendlier, more helpful welcome from our officers who act more like social workers than cops.

Too bad the Border Patrol doesn’t work to defend the American people’s safety and our national sovereignty. Of course, they are only following orders.

LAURA INGRAHAM: OK. So, you can make that out, 209 miles, OK, along the border in this sector, only four miles of fencing. And that wasn’t all. When I was surveying the border from the air, The illegal crossings and the rescues at the river exploded. Luckily Raymond Arroyo and our staff were there with the Border Patrol to capture a lot of the drama.  (BEGIN VIDEO CLIP)

RAYMOND ARROYO: Where will you intercept them?

KEMMETT: It’s the minute they start getting into distress.

ARROYO: This is unbelievable. You see a father and I don’t even see a flotation device.

KEMMETT: The father and a child.

ARROYO: So, he’s in the water without – the baby has got the device on.

KEMMETT: You’re going to come this side.

ARROYO: I’ll get over here. This is terrifying. I mean if a man is separated, now you have a man separated from his baby here. The baby is crying on the other boat and. Border Patrol is left to have to fish him out of the river and this happens every day.

KEMMETT: Every day all the time from sun up to sun down when the boats are in here and they’re doing this pretty much non-stop.

ARROYO: Why risk life in this way?

ARROYO: The humane crisis and the crisis for humanity is what’s forcing these people here and the entire cartel that has created a network to feel just what we’re seeing. The risk to life and limb and to you guys. You all are risking your lives.

ARROYO: By going out of your way to protect and in some cases rescue these migrants, aren’t you incentivizing more of them to do this.

KEMMETT: We don’t incentivize it. We try absolutely not. We don’t want to become a ferry service.

ARROYO: Here we go again, these migrants throwing themselves into the Rio Grande. The difference here, contrary to a lot of the reportage, they know they’re going to be rescued, because otherwise this current will carry them straight down. But Border Patrol always intervenes as they will.

So, this gentleman, this lady, they’re from Honduras. Apparently, they are friends there on the Mexican mainland to help them get across Mexico and here to the Rio Grande and now they’ll go in for processing.

The man and woman we saw here. The lady claims she’s from Honduras. She showed us cuts on her arms, on her head. You believe this might be part of a script.

KEMMETT: It very well could be. And we see a lot of the same story.

ARROYO: Do you think these people paid cartels to get here? They’re from Honduras.

KEMMETT: They don’t move through here without the cartels knowing.

ARROYO: Obviously, you see the tragedy of this all around the square. A father and a daughter jumped into this river thinking they were going to get some clemency, a better life and they’re now going to be taken in, processed and then eventually released here into the country because of the laws the way they are, but they put their belongings in a bag, and they jump in the water and take their chances. This is the situation here. And it really is not only risking their own lives, but the lives of these agents who are taking us out here.