SAID IN SPANISH: Mexico Will “Receive With Open Arms The DREAMers That Return To Our Country”! So What’s The Problem?

The Mexican government and Spanish-language press are carefully following the Trump Administration’s mixed signals about the DACA (Deferred Action for Childhood Arrival) Amnesty. And their commentary gives the lie to the suggestion DACA recipients are “new Americans.” The Mexican government clearly considers them Mexican citizens within our own country. And it’s willing to take them back.

Mexico will “receive with open arms the DREAMers that return to our country”! Who knew?

SRE noted it had “promoted the continuation of DACA, with the goal of maintaining the protection of the young beneficiaries of the program, the majority of them born in Mexico.”

The SRE statement does kindly acknowledge that American immigration policy is to be determined “exclusively by the Americans and their institutions— but this is typically what Mexican officials say right before they meddle.

After all, says SRE, “…our country [Mexico] cannot ignore the fact that there are thousands of young people born in Mexico who will potentially be affected by the decision announced today.”

Therefore, it says, the Mexican government “has a moral imperative to act… to actively promote… a speedy solution to the judicial uncertainty the DACA youth confront from today onward.” The Mexican government is therefore lobbying American elected officials about the “value of the DACA youth for American society” and “will provide comprehensive and individualized consular and legal assistance to every Mexican DREAMer who requests it….”

But note that this Mexican government statement says it will “receive with open arms the DREAMers who return to our country.”

At the behest of President Enrique Pena Nieto himself

the dependencies of the [Mexican] federal government are strengthening their actions with the object of offering a greater support, of taking advantage of their talents and capacities, and integrating them fully in the national society and economy.

Besides the programs already included under the Somos Mexicanos program, the Mexican government plans to provide the following services for DREAMers: Great! Let’s give Mexico the opportunity to help the DREAMers by sending them back there!

After all, if the DREAMers are as outstanding as the MSM and President Trump say they are, wouldn’t they make outstanding contributions to Mexico?

Videgaray said if the DREAMers do return, “Mexico would benefit from their great energy and talent and it would be a loss for the United States. Nevertheless, Dr. Videgaray added that the young people seek to stay in that country [the U.S.] … and the Mexican government has the obligation to support them.”

Bottom line: The Mexican government is hedging its bets. It wants and will work for DREAMers to stay in America. But it’s also preparing for possible deportations, as this could be a big political issue in Mexico and any Mexican government has an incentive to at least appear to be taking care of deported Mexicans.

Meanwhile, the folks at La Opinión, the biggest Spanish-language paper in the U.S., are concerned about DREAMers’ parents.

La Opinión reports an elevation in “anxiety among the young beneficiaries [of DACA] even higher than that of young indocumentados who never applied for DACA. More than their deportation, they fear to have exposed their parents to being expelled from the country.” This is based on a UCLA survey conducted even before the announcement of DACA’s end [A los DACA les preocupa más la deportación de sus padres que la suya propia, (“The DACA recipients are worried more about the deportation of their parents than their own”) by Araceli Martinez Ortega, September 12, 2017].

It seems obvious one of DACA’s goals was to prevent the deportation not just of DREAMers, but of their parents. Of course, Kris Kobach had the solution: Deport them together.

CHILDREN OF THE DREAMers 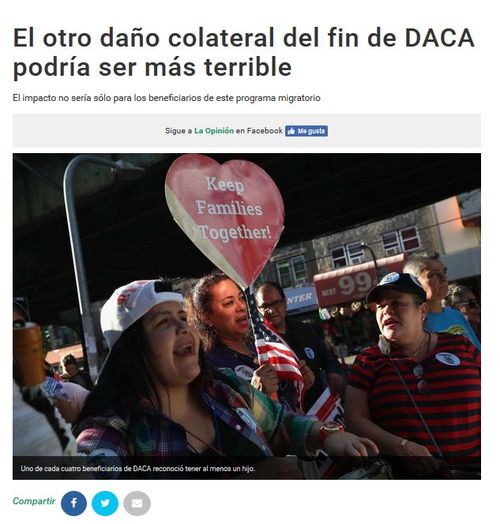 La Opinión also discovered another threat from DACA’s end: the threat to DREAMers’ children. Though DREAMers are characterized by the MSM as children, a quarter of them have at least one anchor baby themselves. La Opinión laments:

Besides putting at risk some 800,000 young people, the end of DACA could cause a greater damage by leaving some 200,000 children without parents… These children are American citizens who, if their parents are deported, will have no one to care for them, and…. the separation from their parents would cause various psychological problems difficult to face, as experts have established.

La Opinion helpfully provides the tear-jerking example: a certain Angelica Villalobos. She and her husband are both DACA recipients and have four daughters, aged 17, 13, 10 and 8. (That means their eldest daughter was born when Bill Clinton was still president!)

The goal of the Main Stream Media is to use such cases to make us feel sorry for these people and give them another Amnesty. Both the parents and the children of DREAMers are being utilized to keep every generation in this country.

A better question: how we did we get ourselves in these admittedly tough situations? 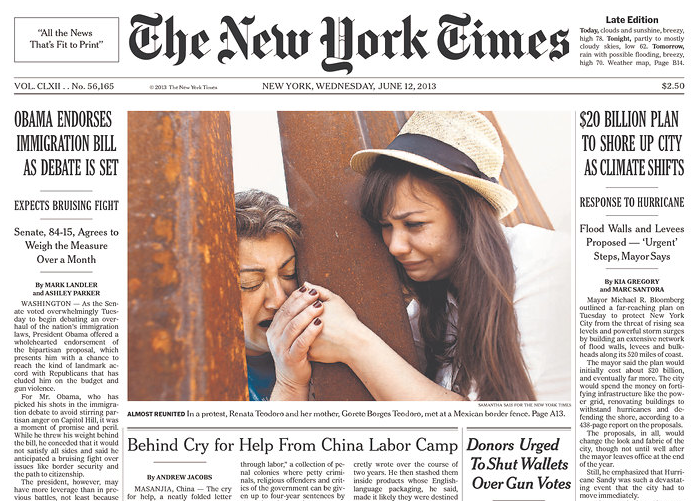 We did it by having a slipshod immigration system for decades. And it is now being used against us.

Part of the problem is our insane anchor baby loophole which ought to be plugged up immediately.  That would eliminate such conundrums and we could just deport the whole family together.

And isn’t keeping families together what’s most important?