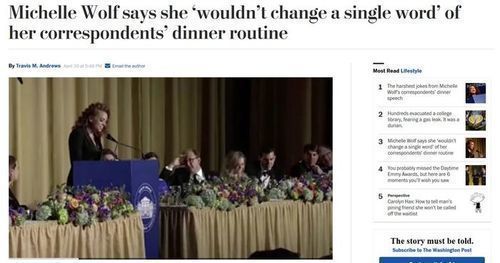 Saturday's White House Correspondents' Association dinner, billed as a celebration of the First Amendment and a tribute to journalists who "speak truth to power," has to be the worst advertisement in memory for our national press corps.

Comedian Michelle Wolf, the guest speaker, recited one filthy joke after another at the expense of President Trump and his people, using words that would have gotten her kicked out of school not so long ago. 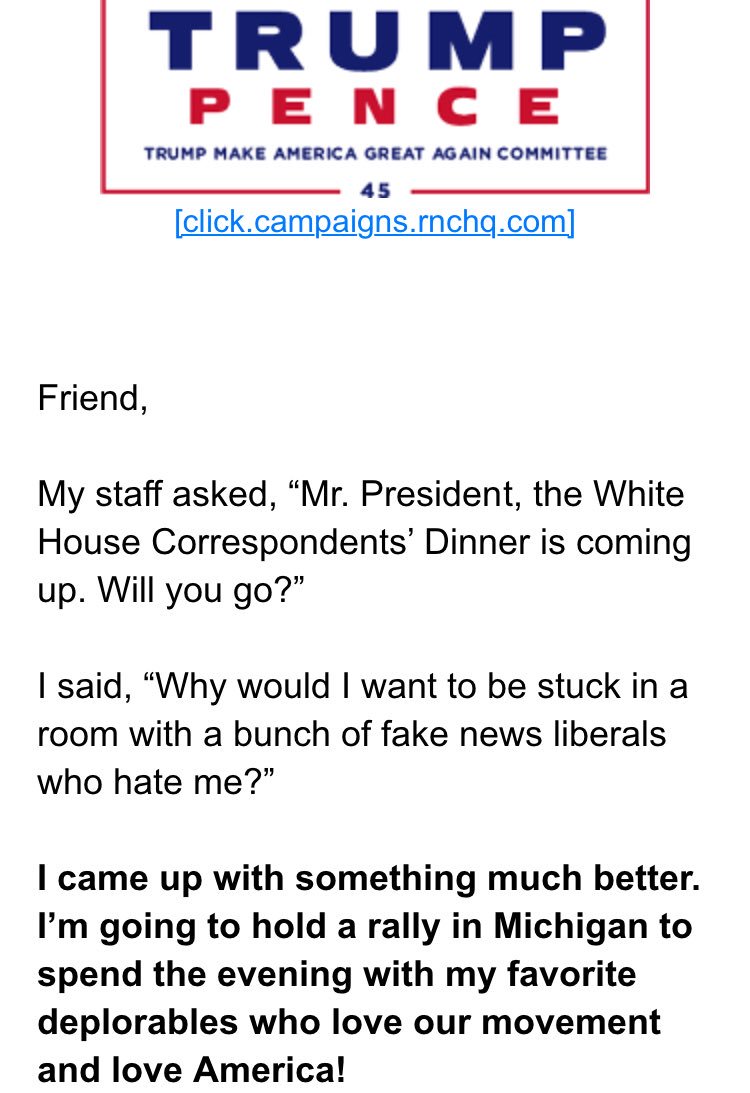 Media critic Howard Kurtz said he had "never seen a performance like that," adding that Wolf "was not only nasty but dropping F-bombs on live television." Some of her stuff was grungier than that.

The anti-Trump media at the black-tie dinner laughed and whooped it up, and occasionally "oohed" as Wolf went too far even for them, lending confirmation to Trump's depiction of who and what they are.

While the journalistic elite at the black-tie dinner was reveling in the raw sewage served up by Wolf, Trump had just wrapped up a rally in Michigan.

The contrast between the two assemblies could not have been more stark. We are truly two Americas now.

"Why would I want to be stuck in a room with a bunch of fake-news liberals who hate me?" said Trump in an email to supporters, adding that he would much rather "spend the evening with my favorite deplorables who love our movement and love America."

Her objective in arranging this year's dinner, said WHCA president Margaret Talev [Email her]  was "in unifying the country," but "we may have fallen a little bit short on that goal." The lady has a gift for understatement.

With revulsion at Wolf's performance coming in strong on Sunday, journalists began to call for a halt to inviting comedians, with some urging an end to the annual dinner that Trump has twice boycotted.

These dinners are becoming "close to suicidal for the press's credibility," writes Margaret Sullivan in The Washington Post.

How did the White House Correspondents' Association descend to this depth?

In 1962, along with friends at the Columbia Graduate School of Journalism, this writer hung out outside the dinner, as we talked to legendary Pulitzer Prize-wining investigative reporter Clark Mollenhoff.

A memorable evening and though most of the press there had probably been JFK voters in 1960, these journalists would never have sat still for Saturday night's festival of contempt.

Nor has the older Gridiron dinner descended to this depth.

A white-tie affair at the Statler Hilton, it is put on by the Gridiron Club, one of whose rules is, "Women are always present." Nothing is to be said from the podium that might affront a lady. And the jokes from the rival party speakers are to "singe, but not burn."

Yet in the eyes of tens of millions of their countrymen, they are seen not as "speaking truth to power," but as using their immense power over American communications to punish their enemies, advance their own agendas, and, today, bring down a president.

The press denounces Trump for calling the media "the enemy of the people." But is there any doubt that the Main Stream Media are, by and large, enemies of Trump and looking to Robert Mueller to solve their problem?

It was saturated with detestation of Trump, his people, and what they represent.

How did we get here?

Like our cultural elite in Hollywood and the arts, and our academic elite in the Ivy League, our media elite is a different breed than we knew in the Eisenhower-Kennedy era. Our institutions passed through the great cultural, social and moral revolution of the late 20th century, and they have emerged different on the other side.

Most of the Washington press corps at that dinner have next to nothing in common with the folks who voted for Trump and cheered him in Michigan. And Hillary Clinton surely spoke for many of the Beltway media laughing at Wolf's jokes when she said:

"(Y)ou could put half of Trump's supporters into what I call the basket of deplorables. ... The racist, sexist, homophobic, xenophobic, Islamaphobic ... (Trump) tweets and retweets their offensive hateful mean-spirited rhetoric. Now, some of those folks—they are irredeemable, but thankfully they are not America."

It's good to know what folks really think of you.

Perhaps, rather than seeking to create a synthetic unity, those who so deeply and viscerally disagree—on politics, morality, culture and even good and evil—ought peacefully to go their separate ways.

We both live in the USA, but we inhabit different countries.