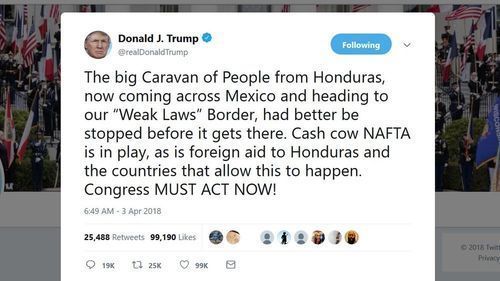 The Mexican Foreign Ministry (SRE, for its initials in Spanish) has informed the U.S. government of its call to suspend cooperation with the U.S. as long as Mexico is not treated with respect.

The SRE declared to President Donald Trump and the U.S. Congress that the Senate of the [Mexican] Republic requests suspension of bilateral cooperation in the matters of migration and security, as long as the U.S. president “does not show respect” to Mexico.

How is Trump not showing respect to Mexico? Well, this particular statement was made in response to Trump’s tweets about the caravan.

On April 24th, the SRE reported to the Mexican Senate that the request “was sent to inform the U.S. Executive, through the Department of State, and both chambers of [the U.S.] Congress. “

Excelsior also reported that “The declaration of the Mexican Senate was approved unanimously, on April 4th” and that the Senate “also categorically rejected the U.S. militarization of the border with Mexico.”

This hasn’t yet been approved by the Pena Nieto administration, but the SRE “informed the senators that soon the cabinet will finish studying the bilateral cooperation with the United States, as instructed by President Pena Nieto, in the face of the rhetoric of Donald Trump.”

The Mexican Senate accuses Trump of a lack of respect for Mexico, but it’s A-OK to encourage Mexicans to break American law, to claim jurisdiction over Mexican-Americans, and to sabotage attempts on U.S. soil to protect our sovereignty.

And it’s A-OK to allow third country nationals to cross through Mexico and enter the United States.

What’s not ok is objecting to this. That’s a lack of respect.