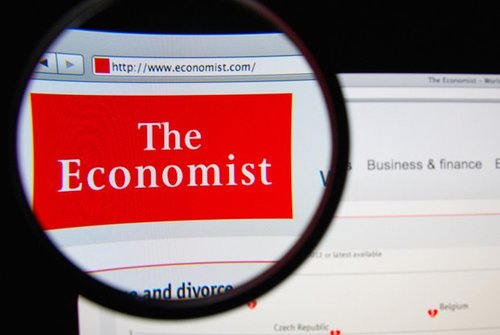 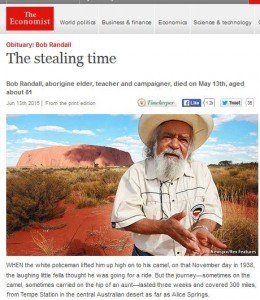 At the very back of each week’s print edition of The Economist there is an obituary. These are often of people you never heard of but who are interesting in some way—more interesting, at any rate, than the average politician or celebrity.

Working backwards for the ten weeks from the June 6th issue, for example, the obituary subjects have been:

Well, the obituary subject in the most recent (June 13-19th) edition is Australian Bob Randall, billed as “aborigine elder, teacher and campaigner.” Randall died on May 13th, “aged about 81.”

Randall’s Economist obituary is the most hilariously self-parodic bit of anti-white Noble Savagery I have seen in a long time.

Bob Randall’s mother was an aborigine from Central Australia. His father was a white man. At age six or seven Randall was taken from his mother and placed in child care, “in accordance with government policy,” says the obituary.

That policy, in force from 1910 to 1970, decreed that all aboriginal half-castes should be placed in institutions to civilise and Christianise them. His family had usually smeared him with mud to make his skin darker, so he wouldn’t stand out. But on that fateful day … he had taken a dip in a water hole and washed it off.

The mud story must of course be according to him. Should we believe it? Read on.

The obituarist is following the “Stolen Generations” narrative. Race activists in Australia claim that the removal of half-caste children from aborigine families during those decades 1910-70 was a plot by white-supremacist Australian governments to eradicate aboriginal culture—an act of deliberate genocide.

That narrative has been debunked by serious historians, but maintains its hold on the imaginations of Cultural Marxists.

The most recent debunking—though not the only one—was by historian Keith Windschuttle in his 2009 book The Fabrication of Australian History, Vol. 3. Windschuttle explained himself at length online in Quadrant magazine shortly after the book came out.

My conclusion [i.e. in his book] is that not only is the charge of genocide unwarranted, but so is the term “Stolen Generations.” Aboriginal children were never removed from their families in order to put an end to Aboriginality or, indeed, to serve any improper government policy or program. The small numbers of Aboriginal child removals in the twentieth century were almost all based on traditional grounds of child welfare. Most children affected had been orphaned, abandoned, destitute, neglected or subject to various forms of domestic violence, sexual exploitation and sexual abuse …

Some [half-castes] saw themselves and were treated by others as Aborigines, but there were many who did not. In some communities, full-blood people accepted half-castes; in others they were not regarded as true Aborigines at all; in some cases, half-caste babies born to tribal women were routinely put to death …

Some Aboriginal children do have genuine grounds for grievance, but they are not alone. In the rough justice of child welfare policy, white children could be treated harshly too, especially if their mothers were unmarried. Until as recently as the 1970s, such children, white or black, were frequently removed on grounds that we would not approve today. Before governments began paying pensions to unmarried mothers in the 1970s, children could be deemed neglected because they lacked a father, and thus a means of support. Until then, unmarried white teenage girls who fell pregnant were strongly pressured by both church and state to give up their babies, who were often taken from them at birth and adopted out to other families. But in these cases the child’s fate was determined not by its colour but by its illegitimacy. There was a common presumption throughout Australia that unmarried teenage mothers, black or white, could not and should not be left to bring up the children they bore … [Why There Were No Stolen Generations (Part One) by Keith Windschuttle; Quadrant, Jan. 1, 2010 (links added)]

The obituarist in The Economist will have none of that. She—I’m guessing the sex here just on the assumption that no male could pack this much sappy woo into 900 words—cleaves close to the anti-white narrative:

They had snatched him from his mother. He never saw her again, and their separation was summed up in a song he wrote in 1970 and sang up and down the land until the government, and even the outside world, noticed it: “My Brown Skin Baby They Take Him Away.” Each verse of his story ended in his mother’s keening.

Keening! I have attached a mid-video link there so that you can sample the keening. My advice would be not to try listening to the whole clip unless you have a strong stomach for dire guitar playing accompanying really dire singing.

Mind you, it takes more than one mother to raise a deeply spiritual child of nature like Randall. It takes a village!

But for an aborigine like him, he told the world, the outrage went much wider. His mother was not only Tanguawa, but all the other women of the tribe, who led him on trails and disciplined him.

More than that, in fact: It takes Gaia.

Beyond that, his mother was the Earth itself: the baked red desert that had “grown him up” and nurtured him with all she had, whose presence gave security to his bounding bare feet and rest to his body under the night stars …

If only we coarse, cruel, materialistic First Worlders, trapped in our absurd, spirit-stifling “houses” and “shoes,” could be so blessed!

They had also stolen him from his family—not just his siblings and “the oldies” who had passed on the stories and understandings, but all people connected to him by certain ceremonies and by veneration of his ancestral totem Kuniya, the carpet-snake. Beyond that, his family was everything around him. Trees, hills, grass, kangaroos, lizards were all “our mob,” familiar, useful and even talkative, to those who knew their language.

Is there a Disney movie in the works?

Last, they had taken him from his country. This was far broader than Mutitjulu near Uluru, which the whites called Ayers Rock …

Isn’t it just like those brutish, insensitive whites to ignore the true, melodious aborigine name for the feature and stick it with a name from their own discordant language?

… or even the land designated by Kuniya as she had wriggled westward from the sunrise. It was anywhere in nature he or his people found themselves, for they had no houses and no need for permanency; as human beings, all creation was “ours”, and nothing “mine.”

None of that evil badwhite “private property” selfishness for these soulful colored folk!

The fact that Bob Randall was a skillful milker of white liberal guilt—that he owed his livelihood and fame entirely to the eagerness of ethnomasochist white liberals to be taken in by dusky charlatans with sob stories—peeps out through cracks in the obituarist’s prose.

He taught the old ways in songs, books and lectures, by setting up an aborigine college in Adelaide and by establishing cultural centres in universities. But it often seemed easier to interest sympathetic whites than his own people, now mostly languishing in dilapidated bungalows behind wire fences, where feral dogs rooted in rubbish and jobless young men wandered around sniffing petrol cans.

Finally, the obituarist tells us with a flourish of trumpets, the white-guilt narrative triumphed:

In 2008 Australia’s then prime minister, Kevin Rudd, apologised to the Stolen Generations and promised that the yawning gap between aborigines and whites would be closed.

Hallelujah! And we all know that when politicians make promises like that, they really mean business, right? (Kevin Rudd makes another appearance in the Daily Telegraph story below.)

Uncle Bob, though gently smiling as ever … went on teaching the old doctrine of kanyini, responsibility for the Earth and unconditional love of her, as far as his soft voice or his guitar would carry.

Get yer hankies out.

He usually spoke from the humble home he had rediscovered, after years of searching, in Mutitjulu. He had known it was the place when he heard from the car “our mob,” the old desert oaks, joyously muttering that the little fella had returned.

After his death, in keeping with custom, his name and picture were removed from the Kanyini website “until sorry business is finished.” Like all flesh, he had been and gone: leaving much more than others, but still a fleeting footfall in the life of his ever-abiding mother, the red Earth.

Now, the trauma that primitive peoples suffered on encounter with civilization was very great. It was in many places a ghastly human tragedy, well documented in books like Alan Moorehead’s The Fatal Impact and Charles Mann’s 1491.

But that trauma was long over by the time Bob Randall was born in the 1930s. Australian governments of that time were struggling as humanely as they could with the very difficult question: How can a modern white-European nation assimilate a race of people displaying radically different statistical profiles on traits of behavior, intelligence, and personality?

They are struggling with it still. From a 2011 news report featuring the aforementioned Kevin Rudd:

Billions of dollars of spending on programmes to improve the lives of Australia's Aborigines have failed to make any difference, with many stuck in the same hopeless situation they faced in the 1970s, a review commissioned by the government has found.

Australia spends an average of AU$3.5bn [the same in US$ at that time] each year on policies intended to improve indigenous health, education, housing and welfare, but was getting “dismal” results, the review concluded …

Australia’s 460,000 Aborigines make up about two per cent of the population.

They suffer higher rates of unemployment, substance abuse and domestic violence than other Australians and have an average life expectancy of 17 years less than the rest of the country.

The report, which was commissioned when Kevin Rudd was prime minister, took into account the progress of the government's Northern Territory emergency intervention programme, brought in by John Howard in 2007 amid great controversy.

Under the plan, thousands of troops and police were sent into Outback Aboriginal communities to stamp out child abuse, alcoholism and domestic violence fuelled by “rivers of grog.” The policy is still in effect in several communities … [Billions spent on Australia’s Aborigines yield “dismal” results by Bonnie Malkin; Daily Telegraph, August 8, 2011.]

Whether there is any solution to this problem until our technology becomes capable of accurate genomic engineering, seems to me to be an open question.

In the meantime sensible people should prefer civilization to barbarism, mock the ethnomasochist fantasies of journalists suckled by the Walt Disney Company and educated under Cultural Marxism, and keep always in mind Dr. Johnson’s reproof to Boswell: “Don’t cant in defence of savages.”