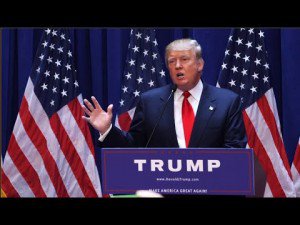 has already rocked the 2016 election by focusing his candidacy announcement squarely on immigration. More than that, he did what no one else has the courage to do by criticizing Latin American nations who are using the USA for, in his words, “a dumping ground.” And Latin America is not very happy with Mr. Trump.

He’s right about all of this.

Trump also pledged to build a “Great Wall” on the southern border, to repeal Obama’s unilateral Amnesty/Immigration and took a shot at Jeb Bush for being “weak on immigration.”

South of the border, in Mexico, the response to the Trump speech was immediate. The Mexican media and political class pay close attention to the U.S. immigration issue.

More outrageously, Mexican government officials were also swift to continue their long-established tradition of meddling in U.S. politics—not that anyone in Washington ever protests.

… [Trump] doesn’t know and surely isn’t familiar with the contribution of all the migrants, of practically all the nations of the world, who have arrived to support, to sustain the development of the United States.

Somehow, I suspect Donald Trump knows more about the American economy than the Mexican Interior Minister.

La Jornada also quoted Chong repeating the common Mexican claim that the United States is a great power because of Mexican immigrants.

It is the male and female Mexicans who are there, in different circumstances, who help, without a doubt, the development of the United States and strengthen it and show it as a great world power.

Interestingly, however, a few reader comments posted on the article actually suggested that Trump would be a good President, and may even help Mexico. As one put it,

I hope that Donald Trump wins the presidency of the United States. Otherwise the leaders of Mexico will never do anything for their own country. We are the laughingstock of the whole planet. We are seen as parasites of the USA. The time has come to show that as a nation we are a power to prosper and that we don’t need anybody to resolve our own problems.

Of course, the implicit claim that without Mexicans and Mexican-Americans our GDP would be 8% lower is questionable, but even if it is true, as we keep saying, the consensus among labor economists is that any boost  to economic growth caused by immigration is  "essentially all captured by the immigrants themselves."

...we hope that this electoral contest in the United States will be a contest that puts at the forefront and with data the value of the migrant and not a contest which reflects ignorance.

Excelsior also reported that Meade claimed Hillary Clinton and Jeb Bush were more knowledgeable on immigration than Trump. Thanks for the tip, Mr. Foreign Minister.

I suppose we are supposed to think a “nationalistic vein” is a bad thing.

What is perhaps more interesting is that some American commentators are making complaints about Trump that are almost the same as what foreigners say about him.

For example, Jonathan Capehart at the Washington Post declares:

In the 45-minute “festival of narcissism” that was Donald Trump’s rambling presidential announcement, one particular nasty passage proved him to be a menace to the Republican Party. It was the one about Mexican immigrants. That plays well with many far-right Republican primary voters desperately clinging to an America that no longer exists. But such rhetoric is the death knell for the GOP — and the party knows it…

Tea Party menace Dick Armey perhaps put it best of all. “You can’t call someone ugly and expect them [sic] to go to the prom with you,” he told the writers of the GOP autopsy. “We’ve chased the Hispanic voter out of his natural home.” Trump’s rhetoric guarantees they won’t return.

[Donald Trump’s ‘Mexican rapists’ rhetoric will keep the Republican Party out of the White House, June 17, 2015]

(The “GOP autopsy” is the “RNC Growth Opportunity Book 2013,” in which Republican National Committee functionaries tried to hustle Amnesty/ Immigration Surge past the GOP using the excuse of a presidential election defeat they themselves largely brought about).

I’m going to go out on a limb and predict that Trump will not be the next president of the United States or even the GOP nominee. But his harsh rhetoric and the way his opponents respond (not well, I suspect) to the xenophobic zingers he will hurl on the debate stage will hobble the next Republican nominee’s effort to secure the keys to the White House.

But a lot could happen between now and November 2016. The Trump candidacy could turn out to be nothing, but who else is speaking as clearly and boldly?

Many Americans are hungry for a candidate who is unabashedly patriotic, defends American workers, will defend our border, and thinks of our country as something more than a “dumping ground.” Unlike Mexico’s preferred candidates, Hillary Clinton and Jeb Bush, Trump is unafraid to put America First, instead of blaming America First. And at least Trump never repeats that tired “nation of immigrants” mantra.

If Trump could successfully combine economic nationalism, including immigration patriotism, with an appeal to blue collar American workers, he could be unbeatable.

Both foreigners and American journalists apparently believe that American presidents should be elected by appealing to Hispanics. But, as I have argued before, the paradox is that by appealing to Americans, of all races, Trump might also pick up the votes of patriotic Americans of Mexican ancestry who identify with the United States and its interests rather than those of the La Raza lobby.

Wouldn’t that be something?