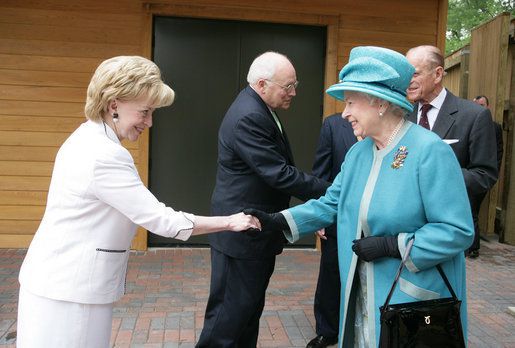 On the 400th anniversary of the Jamestown Settlement, Queen Elizabeth II arrived to commemorate the great occasion. And it took some fancy footwork for Her Majesty to run the Powhatan gauntlet.

For Her Majesty had been to Jamestown before, 50 years ago, in a less progressive era. As The Associated Press reported, "The last time the queen helped Virginia mark the anniversary of its colonial founding, it was an all-white affair in a state whose government was in open defiance of a 1954 Supreme Court order to desegregate public schools." [Queen Elizabeth cites change on Virginia visit, AP, May 3 2007]

Now, "massive resistance" is history. And Her Majesty was quick to embrace the change: "[S]ince I visited Jamestown in 1957, my country has become a much more diverse society, just as the Commonwealth of Virginia and the whole United States of America have also undergone a major social change."

True. But are we better societies now than 50 years ago?

The latest reminder of diversity in Virginia was the massacre of 32 students and teachers at Virginia Tech by a berserk Korean. And now that London is Londonistan, Muslim imams openly preach hatred of the West in mosques. Pakistani subway bombers find support in their community. Race riots are common in the northern industrial cities. Crime rates have soared. In areas of London, people fear to walk. Is this better than it was in 1957?

Last week, Scottish nationalists, many of whom wish to secede, swept past Labor to become the first party of Scotland. Welsh separatists also made gains. Following the Irish, the other Celts want out of the England of Elizabeth II. Is this better, Your Majesty?

The Great Britain of Tony Blair may be more diverse than the land of Victoria and Edward VII, Lloyd George and Winston Churchill—but is it a better nation?

Only if one worships diversity can one say Britain is a better, stronger or greater country than she was on the eve of the Great War, a century ago, when Britannia ruled a fourth of the world.

But the new orthodoxy demands we say this. And Her Majesty was careful to conform. "Fifty years on, we are now in a position to reflect more candidly on the Jamestown legacy," said the queen, as she began to reflect less candidly.

At Jamestown, "Three great civilizations came together for the first time—Western European, native American and African."

Well, that is one way to put it. Except that the Jamestown settlers were not Western Europeans but English Christians. And the first thing they did was build a fort to protect themselves from Powhatan's tribe, whom they thought might massacre them—as they suspected Indians had massacred the Roanoke colony. Their leader, Capt. John Smith, barely escaped execution by Powhatan. Or so Smith tells it.

As for the Africans, they arrived in 1620 in slave ships, and were not freed for 145 years. Then they were segregated for 100 years. There was no coming together of African, Indian and European civilizations. The African slaves were uprooted from their civilization and had to become part of ours.

Jamestown was no coming together of civilizations, but the opening of a war of imperial conquest by self-confident Christians who defeated and destroyed the pagan Indian tribes, drove them westward, repopulated their lands, and imposed their own faith and laws.

When we came, the Indians had the land. We took it.

Backing away from her statements of half a century ago, the queen politely conceded, "With the benefit of hindsight, we can see in that event [Jamestown] the origins of a singular endeavor—the building of a great nation, founded on the eternal values of democracy and equality."

That a great nation arose from Jamestown is undeniable.

But, again, what is this nice lady talking about? The American Revolution was not fought for equality or democracy, but to be rid of British rule. Four of America's first five presidents—Washington, Jefferson, Madison and Monroe—were Virginia planters and slaveholders.

Before the Civil War, 250 years after Jamestown, almost no American, and certainly not Abraham Lincoln, believed in social or political equality for Africans. Jefferson had said a "natural aristocracy" of talent and virtue should rule.

And when we see what democracy and equality have produced in political leadership—Harry Reid, Nancy Pelosi, Bill Clinton and George W.—did not Jefferson have a point?

In his farewell address, Ronald Reagan warned, "We've got to teach history based not on what's in fashion but what's important. ... If we forget what we did, we won't know who we are. I'm warning of an eradication ... of the American memory that could result, ultimately, in an erosion of the American spirit."

The founding of this country does not conform to the dogmas of the present.

But we had best discover why it was our forefathers, who created this country, rejected, totus porcus, the nonsense we spout today about egalitarianism and globaloney.