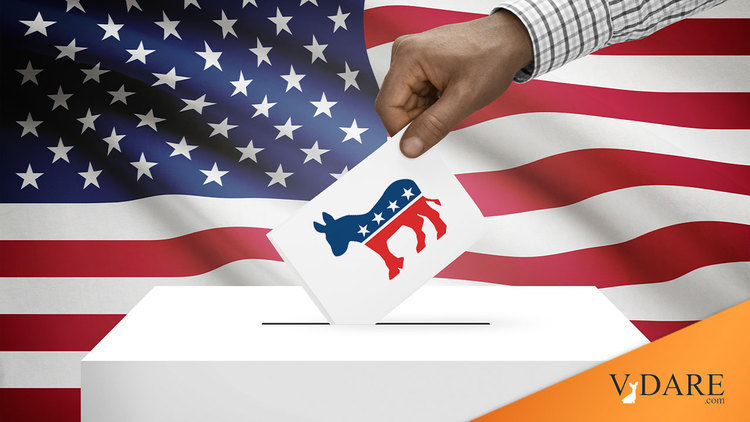 Voting Rights For Everyone—Whether Or Not They Speak English

"[S]ome Congressmen probably would vote for a declaration of war against Canada if it were contained in a bill with the words 'civil rights' in its title." ['Civil Rights' That Can Lead to Civil War, By Thomas Sowell, New York Daily News, April 24, 1990), p. 30, quoted in Paved With Good Intentions, p. 151]

President Bush's speech to the NAACP on Thursday was strikingly lacking in any sort of "Sister Souljah moment"—chiding that venerable but now notoriously corrupt and ineffectual black organization for even one of its numerous faults.

Instead, Bush made the climax of his speech a demand that the Senate pass a 25-year extension of the Voting Rights Act without amendment.

The Senate instantly complied by a vote of 98-0 (following the House's passage by the margin of 390-33).

As a substantive bill, the VRA extension was notable for insisting that foreign language ballots be provided to voters who need them.

Yet, to become a U.S. citizen, immigrants are legally required to prove that they are literate in English. So the need for a non-English ballot would appear to be prima facie proof that an immigrant either fraudulently became a citizen or that he is a noncitizen attempting to vote fraudulently. [Vdare.com Note: Jack Kemp claims that Republicans who oppose the VRA are Know-Nothings. He would. He also claims that 70 percent of the non-English speaking voters are born in the US, which, if it's true, is an indictment of Kemp's Open Borders policy over the last twenty years.]

But President Bush and the solons of the Senate aren't concerned about mere logic when they can revel in one of the more popular rituals of 21st century political theatre: pretending that Southern white racism is omnipresent, a pervasive threat to blacks' right to vote.

Apparently, the only thing that can divert this tidal wave of Southern white bigotry from washing away the gains of the 1960s is a unanimous vote of the Senate, including all the Southern white Senators, in favor of the new VRA.

Thus, the mark of Cain will officially be upon the South into the 2030s for evils that disappeared by the 1970s.

In reality, as Thomas Sowell pointed out back in the pre-Internet days, the 1965 Voting Rights Act was the most quickly successful of the civil rights era landmarks.

The more famous 1954 Brown v. Board of Education decision theoretically outlawing school segregation remained almost a dead letter until the Nixon administration forced the desegregation of Southern schools in 1969. The ruling's initial impact was merely to radicalize Southern white sentiment in favor of "massive resistance." And, indeed, even today, when de jure segregation is officially excoriated, de facto segregation remains standard practice: most white parents make costly efforts to shield their children from having to attend schools that are heavily black.

In contrast, Sowell argued, the denial of the vote to Southern blacks was an obvious violation of the 15th Amendment, and it wasn't as much of an emotional hot button for the public since it involved the fates of politicians, not their own children. Soon after Congress finally passed the Voting Rights Act in 1965, rabble-rousing white Southern politicians either saw their careers come to a quick end now that everyone could vote, or, like George Wallace, they changed their tune. So, there was no more organized resistance to civil rights.

In other words, the effectiveness of the initial Voting Rights Act in the 1965-1969 era was because, once it dismantled the various subterfuges that kept Southern blacks from voting, blacks possessed enough political power to make black voting rights self-enforcing.

And more than self-enforcing—witness ceremonies like last week's 98-0 Senate vote.

But there's another point about the VRA. Contrary to explicit assurance given when the 1964 Civil Rights Act was passed (just like, not coincidentally, the assurance given when the 1965 Immigration Act was passed), the legislation has spawned pervasive "Affirmative Action", a.k.a. quotas. The fight against these quotas has only just begun. In that fight, we have much to learn from the complex enforcement mechanisms built into the original VRA.

We're coming up on the tenth anniversary of California voters' approval of Proposition 209, the anti-affirmative action 1996 initiative authored by Glynn Custred and Tom Wood, and chaired by Ward Connerly.

Like Brown, Prop. 209 was greeted by massive resistance by the entrenched California establishment. Also like Brown, but unlike the 1965 Voting Rights Act, Prop. 209 didn't alter who held political power, so the powers-that-be that had erected all the racial quotas in the first place continued to, well, Be. Not surprisingly, these powers subsequently attempted multiple end runs around the clear language of the law.

For example, as La Griffe du Lion, the Zorro of statisticians, pointed out in his 2000 essay "The Death of Meritocracy," the first UCLA medical school class admitted under Prop. 209 was blatantly in defiance of the new state constitutional amendment.

Only 3.0 percent of white and Asian applicants were admitted versus 10.4 percent of blacks and Hispanics, even though the "underrepresented minority" admittees had much lower grades and test scores.

Due to the tenacity of a few UC Regents such as Connerly and John Moores, and the pro bono lawsuits filed by the Pacific Legal Foundation, progress has been made since then in getting the University of California to follow the law.

Still, the creativity of the diversicrats at evading the will of the people remains remarkable.

Early in this decade, for instance, the UC colleges adopted "comprehensive review" of applicants, authorizing them to hand out admission not just for grades and test scores, but also for "overcoming adversity"—including having been shot! (Hint: Victims of hunting accidents need not apply.)

The problem is that in California, the anti-quota good guys are forced to fight back retail, while the bad guys are continuing to discriminate wholesale.

To get around the identical problem, in 1966, the Supreme Court upheld Section 5 of the original VRA, which mandated Justice Department oversight of the any changes in the law, saying:

"Congress had found that case-by-case litigation was inadequate to combat wide-spread and persistent discrimination in voting, because of the inordinate amount of time and energy required to overcome the obstructionist tactics invariably encountered in these lawsuits. After enduring nearly a century of systematic resistance to the Fifteenth Amendment, Congress might well decide to shift the advantage of time and inertia from the perpetrators of the evil to its victims." [SOUTH CAROLINA v. KATZENBACH 383 U.S. 301 (1966)]