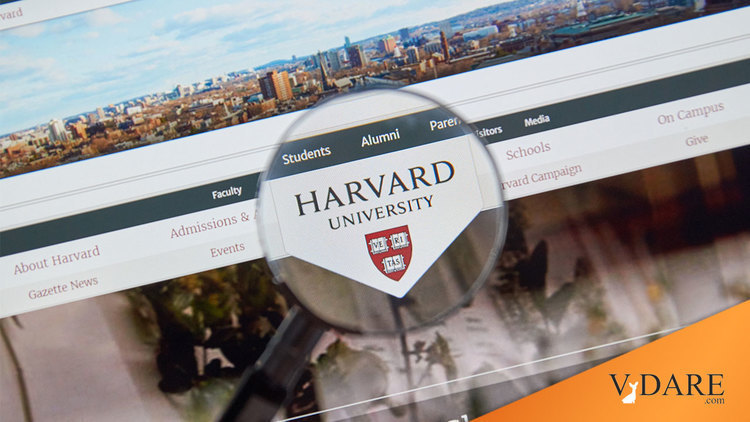 Political Correctness At Elite Law Schools: It’s Not The Professors, It’s The Students—Which Is Why You Should Give To VDARE.com!

Law School Wars: Harvard Law School Dean Martha Minow [Email her] recently gave a written statement to a Federalist Society conference on Intellectual Diversity in which, after repeating some trite quotes from John Stuart Mill, she wrote that Harvard aims to promote—

…civil and curious engagement across all kinds of divides—be they defined by race, region, class, language, political party, gender, ideology, or other signifiers of difference. Modeling and cultivating honest and engaged discussion across lines of difference is not only our best practice. It is our commitment to make good on the privileges that the Harvard Law School enjoys, reflects, and bestows.

Significantly, Harvard Federalist Society president Joel Alicea responded in the Washington Times [The academy’s war on free thinking: U.S. law schools treat diversity of news [views?] as a ‘thoughtcrime’, May 27, 2013]. He repeats much what Minow says, though he finds a different John Stuart Mill quote. But he suggests that the real problem that Minow does not address is that most elite law schools have overwhelmingly liberal faculty

But neither Minow nor Alicea mentioned the most outrageous attack on “free thinking” at Harvard Law, which occurred just three years ago—when the Harvard Federalist Society was AWOL.

In 2010 a Harvard Law student wrote a private e-mail to a friend. She said:

I absolutely do not rule out the possibility that African Americans are, on average, genetically predisposed to be less intelligent. I could also obviously be convinced that by controlling for the right variables, we would see that they are, in fact, as intelligent as white people under the same circumstances.

This student was at the top of her class at Harvard. She had secured a clerkship with 9th Circuit Chief Judge Alex Kozinski.

(The HLS student’s name is well known, but I am not mentioning it here as the scandal appears to have passed, in the unpredictable way that PC scandals do, and I don’t want her showing up on any more Google News alerts. The legal blog Above the Law referred to the student as CRIMSON DNA, so I will use that name here).

CRIMSON DNA’s “friend” forwarded the e-mail to the Black Law Students Association, who then spread it far and wide. Various Leftist journalists and bloggers expressed the usual indignation and tried to pressure Judge Kozinski to revoke her clerkship.

Much of the negative reaction against CRIMSON DNA was a combination of sheer personal jealousy and the liberal belief that, while discussing IQ differences is racist, all “racists” have low IQs. To Kozinski’s great credit—and in dramatic contrast to the Heritage Foundation’s treatment of Jason Richwine—he did not give in to the mob.

If HLS Dean Minow truly believed in cultivating an “honest and engaged discussion across lines of difference,” she should have simply defended CRIMSON DNA’s right to consider both sides of an issue. But instead, she sent an e-mail to the entire school that said CRIMSON DNA’s e-mail asserted “black people are genetically inferior to white people.”

Additionally, Minow “met with leaders of our Black Law Students Association to discuss how to address the hurt that this has brought to this community.” [Peter Berkowitz, Harvard Law vs. Free Inquiry, Weekly Standard, May 17, 2010]

As George Mason Law Professor David Bernstein noted sarcastically, CRIMSON DNA had in fact merely said it was possible that there were genetic differences in intelligence. And he commented:

Completely putting the race issue aside, Dean Minow’s revision suggests that she believes that people who have genetic endowments for greater-than-average intelligence are ‘genetically superior’ to the average person. Now that’s an ugly sentiment, though perhaps one rather comforting for someone smart enough to be dean of Harvard Law School.

[Berkowitz on Harvard Law and the Email Controversy, Volokh Conspiracy, May 10, 2010]

I can categorically and unequivocally deny that the comments in question were uttered at any official Federalist Society dinner. The only dinner our chapter held this semester was our annual banquet on April 9th, at which the 3L] [Third Year Law student] in question was not present.

Moreover, the 3L responsible for the comments and e-mail at issue is not 1 currently nor has ever been an active member of the Harvard Federalist Society. [This 3L] has never been eligible to vote in our elections, has never attended our national convention or student symposium, and has never applied for a board position. I do not know how our chapter ended up as part of this story, but we, to be blunt, have absolutely nothing to do with this.

Of course, there is nothing wrong with correcting the record—if CRIMSON DNA was really not involved with the Federalist Society. And, given that I’m using a pseudonym for this piece, I can’t get on a high horse about how the Harvard Federalist Society should have bravely expressed its support for CRIMSON DNA’s e-mail.

Yet by using phrases like “categorically and unequivocally deny,” Scharf made it seem like CRIMSON DNA’s views were abhorrent, and thus further marginalized her.

Personally, I must admit had no negative experiences with liberal law professors during my elite law school experience. The biggest obstacle to expressing heterodox views was not the faculty, but gossipy and status-conscious students—both liberal and candidate Conservatism Inc. types—who ostracize anyone who expresses really Politically Incorrect opinions.

The Harvard Federalist Society’s Alicea notes that liberal professors often do a poor job of explaining the conservative viewpoint. Furthermore, he argues that terms like “marriage equality” are biased in and of themselves.

Both points are true. But I must say that all of my professors encouraged conservatives to speak their mind in class. I have friends at other elite schools who say their liberal professors have even thanked conservatives who livening up the discussion. I made some very right-wing policy arguments in my exams and papers with liberal professors who gave me good grades. I am sure there are some exceptions, but the vast majority of liberal law professors treat conservative students fairly.

In contrast to the shaming of CRIMSON DNA, I have one professor briefly alluded to IQ differences in class (although in a way that was over the heads of most of my fellow classmates) and two professors and I have discussed this privately. There are some very prominent legal academics who have discussed race and IQ publicly such as Judge Richard Posner at the University of Chicago, Amy Wax at the University of Pennsylvania, and (with some qualifications) Eugene Volokh at UCLA.

But the real problem: whenever a student makes even a mildly Politically Incorrect argument, you can be sure that his classmates will start gossiping about how he’s a racist.

And there’s the real possibility that these backstabbing students will then try to spread these rumors to law firms and judges.

So I am not writing this to criticize the Federalist Society. It’s a decentralized organization, and many individual chapters bring in genuinely subversive speakers such as Charles Murray, Heather Mac Donald, Kris Kobach, and even Peter Brimelow! Many of the braver law professors such as Wax and Volokh are affiliated with the group.

Indeed, given the gossipy nature of law schools and the even more Politically Correct culture of most corporate law firms (another article into itself), I can’t really criticize the Federalist Society’s Alicea and Scharf as individuals. They are simply acting within a framework where any suggestion that they are “racist” could easily undermine an otherwise promising legal career.

Still, it is important to recognize that the problem inherent in law schools, the legal profession, and for that matter America, is not just a few liberal professors.

Much more damaging is the culture, in which accusations of “racism” can destroy one’s career—even if one is not involved in politics at all.

There are no easy answers to this problem. But a small first step is to give money people with truly heterodox thoughts an opportunity to make a living outside of the confines of corporate America.

Speaking of which, have you contributed to VDARE recently?

John Reid [email him] is a recent law school graduate. For the reasons described in this article, he is using a pseudonym.