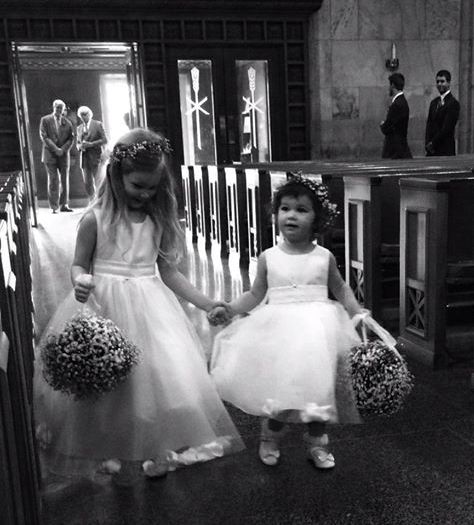 Well, in this case they made it all the way down the church aisle to the front pews, where they were grabbed by my older son and daughter.

But I am less confident of their future in the America that is being created by the government’s policy of mass non-traditional immigration. Karia will not even be 30 when, on current projections, whites—that is, the group known throughout most of American history as “Americans”—will become a minority in the country they created. There has never been a demographic transformation like this in the entire history of the world. There is no reason to suppose it will work.

And, of course, we of the older generation will not be here to protect our children from the disaster we created.

That is, the disaster some of us created. Ultimately, I edit VDARE.com because I hope to prevent that disaster, or at least to figure out ways to get through it. As I wrote in my introduction to the Kindle Edition of Alien Nation, “I Believe I Will Be At Least Exempted From 'The Curses Of Those Who Come After'”

At this moment—about 10 pm on Monday night—VDARE.com is about $1,000 short of our $30,000 Fall Fundraising target. We hope that will make up the balance as the last checks snailmail in over the next few days (but you can help here!)

So I’m going to take this opportunity to thank our loyal readers, many of whose names we recognize and greet with affection even though we’ve never met. (And our new dynamic young fundraising directress is increasingly dragging me out of my lair to meet donors across America!)

You, and all of us at VDARE.com, are part of a grand double experiment: whether a patriotic alternative media can be created via the internet—and whether, by mobilizing patriotic Americans through argument, it can defeat the country’s corrupt and treasonous elite.

We are profoundly grateful to you.

A couple of years ago, I ended a fundraiser on a similar somber note about the future and asked: Will It Come To Blood?

I believe the points I made there are still valid. (Answer: probably).

But tonight I want to end on a different, and even hopeful, note: by noting veteran political journalist Michael Barone’s just-published column Why Has Immigration Shifted?[RealClearPolitics.com, September 23 2014)].

I know Barone slightly and we’ve been systematically criticizing his knee-jerk immigration enthusiasm for some fourteen years (see here). Not once during that entire time has he ever deigned to respond, although a VDARE.com radio listener wrote me that, when asked about Alien Nation on the Radio America Network’sSchiffer Report,"Barone became indignant, describing you as ‘the guy who wants to restrict immigration because his son has blond hair and blue eyes…’”

(This scandalous revelation—it occurred only once, on page 11—was probably the most cited passage in the book. As far as I can see, it was never cited in its context: the paradoxical and destructive effect of the interaction between non-white immigration and affirmative-action quotas upon those native- born Americans who are not members of the so-called “protected classes,” as Alexander manifestly is not— I regard this hysterical reflex as further proof of my opening thesis in Alien Nation: current immigration policy is Adolf Hitler's posthumous revenge on America.)

I’m not surprised at Barone’s refusal to debate—immigration enthusiasts typically never debate, they just rely on their access to the Main Stream Media megaphone to shout down opposition.

But I am mildly surprised by the completeness of Barone’s reversal in this current column—because, of course, “immigration” has not “shifted,” just Barone’s perception of it.

In my 2001 book, The New Americans, I predicted that Hispanics would move upward, much as Italians had a century before. That was overoptimistic. There has been little or no upward mobility among third- and fourth-generation Hispanics.

This is exactly what VDARE.com pointed out in its review of Barone’s book back in 2001.

[T]he America that welcomes [Hispanics] is no longer a nation with equal citizenship for all, but a nation that shunts them into a special supposedly privileged but also stigmatized minority group. Anomalously, racial quotas and preferences benefit those never discriminated against in the United States.

VDARE.com has said this repeatedly (see here and here)…and, of course, it was the point I was making with my reference to Alexander (see above).

Some preferences have hurt more than helped. Steering mortgages to non-creditworthy Hispanics produced foreclosures and personal tragedies—and a financial crisis.

VDARE.com saw this coming in 2004, diagnosed it as the “Minority Mortgage Meltdown—and has pointed out that it’s starting up again. (For that matter, I refuted the academic study that led to this disastrous credit policy in Forbes Magazine in 1993).

There's an obvious lesson here for immigration policy. Immigration can promote social mobility, but not always. The United States got high-skill immigrants in the Ellis Island period largely by happenstance. Today, Canada and Australia profit from upward mobility because their immigration laws admit only those with high skills. If we want similar results, we should follow their lead.

Putting aside the question of whether Canadian and Australian immigration policy really works like that, this was exactly the conclusion I reached in Alien Nation.

And this brings me to my conclusion. I still think there’s a case for moderate skilled immigration, but—partly under the influence of Dr. Norm Matloff, who ambushed me on the Alien Nation book tour to upbraid me—I now think that it has downsides, for example in displacing skilled Americans; and that anyway its impact on employment and incomes is now too great, especially given the appalling plight of Gen Y college graduates. An across-the-board immigration moratorium is now the only answer.

I am pleased that Michael Barone, who is actually among the better MSM pundits, has seen the light, sort of, on immigration—it’s one of a number of recent encouraging signs.

But Barone is nearly twenty years too late. The argument has moved on.

That is why VDARE.com is so necessary—and why your support is so valued.