Paul vs. Cruz Compete For GOP Populist Mantle—So Which One Will Take Up Birthright Citizenship Reform? 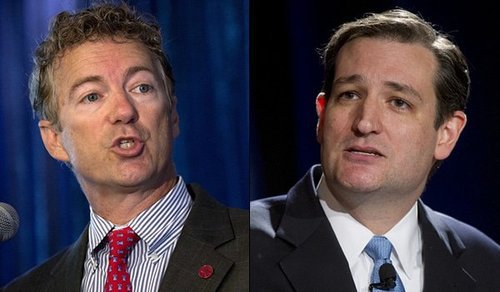 Rand Paul and Ted Cruz—who gets to be the “populist” candidate?

Jeb Bush, a man whose only discernable idea is contempt for the Republican base, is “actively exploring” a Presidential run, to the rejoicing of the GOP donor class [Money men cheer Bush news, by Anna Palmer, Kenneth Vogel, and Maggie Haberman, Politico, December 16, 2014] The Biggest Loser, appropriately enough: Chris Christie, who now has a serious opponent in the contest to be the Establishment candidate. But the real significance may be how Bush’s campaign will shape the contest on the Republican Right—which will come down to a battle between Ted Cruz and Rand Paul as to who gets to be the “populist” candidate.

The populist candidate will be the one who is the most unlike Bush – and Jeb Bush is defined by his support for mass immigration. As VDARE.com’s John Derbyshire has noted: “Jeb Bush just doesn’t like Americans very much.” And Americans, especially conservatives, are in no mood to compromise after Obama’s Unilateral Amnesty and the Republican Establishment’s shameful decision to pass a spending bill to fund it in both the House and the Senate.

Senator Ted Cruz achieved a minor victory by forcing a vote on the constitutionality of President Obama’s immigration order. This led to outrage among some Congressional Republicans, because, as Neil Munro acidly comments, it forced them to “cancel travel plans and miss planned parties.” [Senate GOP Leaders Back Obama Amnesty, Oppose Cruz Vote, Daily Caller, December 14, 2014] Others were furious because they say it allowed Harry Reid to sneak through judicial and administrative nominees for confirmation votes—though Cruz’s spokesperson Amanda Carpenter notes Reid would have gotten those votes eventually anyway.

Still, Cruz forced Republicans to go on the record on immigration– and only 22 voted with Cruz, with 20 voting against (and three not voting). [How Big is the Ted Cruz Caucus, by Steven Dennis, Roll Call, December 14, 2014] Among the Quisling Caucus was Mitch McConnell, who will be the Senate Majority Leader in the next Congress. [McConnell declines to explain ‘no” vote against Cruz’s point of order on executive Amnesty, by Carolina May, Breitbart, December 16, 2014] And many Republican Senators have been unusually harsh in criticizing Cruz’s gambit, seemingly reflecting a deep personal antagonism towards Cruz himself.

But if Cruz’s goal is to prepare a run for President, he’s accomplished his goal. Politico notes, “Conservative outside groups view Saturday’s vote as the first salvo in the GOP v. GOP purity wars that they hope to reignite in the beginning of the new Congress and in the run-up to the 2016 Senate races.” Cruz is also vowing to fight the leadership again in February over Obama’s Amnesty. [Ted Cruz reignites GOP civil war, by Manu Raju and Burgess Everett, December 16, 2014]

Thus Cruz won a political victory because he portrayed himself as the conservative champion on immigration. And whatever politicians say or think about Cruz, at least the ones facing re-election are intimidated. After all, even the pro-Amnesty Marco Rubio felt obliged to vote with Cruz on his point of order and to vote against CRomnibus as a whole.

Senator Ted Cruz has clearly shown himself to be a creature of pure political ambition, even telling off an audience of Middle Eastern Christians to their face in order to preserve his “pro-Israel” credentials. But he has competition on the Right in the form of Senator Paul, who has shown himself to be just as politically skilled—or devious, depending on your interpretation.

Initially, Paul ran for the Senate as an immigration patriot, but then reversed course and started promoting Amnesty. He’s also tried to make up for his onetime support for freedom of association by an increasingly embarrassing series of pandering stunts around the theme of Republican outreach to black voters. His libertarianism only extends to the limits of Political Correctness— much like that of the libertarian movement as a whole. Just as his formerly interesting employee Jack Hunter has become the most predictable liberal columnist in America, Rand Paul is now the Main Stream Media’s go-to man for quotes on how the Republican Party is too white.

Even today, Paul is still predicting that the new Republican Congress will pass a “sane” form of “immigration reform” that will “expand some of the ability for people to get work permits in our country.” [Rand Paul Predicts GOP Will Pass ‘Sane’ Immigration Reform, Breitbart TV, December 16, 2014]

But Paul has not completely ignored his right flank. He’s largely avoided any embarrassing votes that could put him on the wrong side of the immigration issue. He voted against the Gang of Eight Bill. He supported Cruz’s point of order in the CRomnibus battle and voted against the bill as a whole. Shamelessly, he even raises money on opposing Amnesty.

Paul is also moving to re-establish some of his credentials as an immigration patriot and a champion of the conservative grassroots in preparation for the campaign. Thus he just introduced legislation to repeal Obama’s unilateral Amnesty. [Rand Paul Introduces Bill to Kill President Obama’s Immigration Order, by David Knowles, BloombergPolitics, December 14, 2014]

And only hours after Jeb Bush announced he was “actively exploring” a Presidential campaign, Rand Paul already was running ads against him on Common Core. [Rand Paul is Already Running an Ad Against Jeb Bush, by Zeke J Miller, Time, December 16, 2014]

It’s easy enough for Paul to campaign against Bush—but it will be far harder for him to distinguish himself from Cruz. Nevertheless, Paul has two key advantages:

Cruz is driving incumbent Republicans insane with his tactics, but Paul has carefully established relationships with leading Republicans, especially future Senate Majority Leader Mitch McConnell, whom he practically saved this last election cycle. Indeed, McConnell has already endorsed Rand Paul for President. [Mitch McConnell Backs Rand Paul in 2016, Giving Him the Kind of Endorsement His Father Never Won, by Shane Goldmacher, NationalJournal, November 7, 2014] In 2012, there was even discussion within the Paul camp of Rand running instead of his father Ron, though they wisely gave the Senator four more years to prepare.

While Rand Paul’s glad-handing with the Establishment and policy flip-flops on immigration and foreign policy and may cost him support among increasingly doctrinaire Open Borders libertarians, the younger Paul will still be able to command a network of experienced activists unavailable to any other candidate. Even Ron Paul was able to put a scare into the “leading” GOP candidates—and Rand Paul is far more formidable.

Though we may not like it, Paul’s profile in political cowardice over the last few years has been a delicate balancing act between courting the Establishment, retaining his libertarian base, and posing as a Tea Party conservative—and he may have pulled it off.

In contrast, if Cruz runs, his strategy is more straightforward: get to everyone’s right and win the “purity wars” within the GOP that he has unleashed.

But despite his current posturing, Cruz’s record on immigration is actually mixed, and positively bad on legal immigration. Righteous Liberal Mickey Kaus has even charged that “his very opposition to Amnesty was fake.” Nonetheless, Cruz may still be forced to seize on the immigration issue because it is clearly the best way to differentiate himself from Rand Paul and take advantage of Paul’s many policy flip-flops.

The best way for Cruz to do that: Resubmit a bill that Rand Paul once introduced into Congress – an abolition of birthright citizenship. This would also destroy the partisan rationale for Barack Obama’s Unilateral Amnesty–illegals and their children would be permanently barred from a “path to citizenship.” And it would be very difficult for Paul to decry a bill that he himself introduced only a few years ago.

Of course, neither Paul nor Cruz actually seems eager to frame a campaign as a kind of National Conservative uprising to protect American workers and defend the middle class. Ted Cruz is no Pat Buchanan, even though he looks a little like him.

But the logic of a presidential campaign will force these two candidates to attack each other on the immigration issue. And the more chaos unleashed within the corrupt GOP, the greater chance that immigration patriotism can break out as an independent force.

And when that occurs, immigration patriots can finally get off the defensive, and build a political movement that gives us somebody to vote for—rather than just another Bush to vote against.