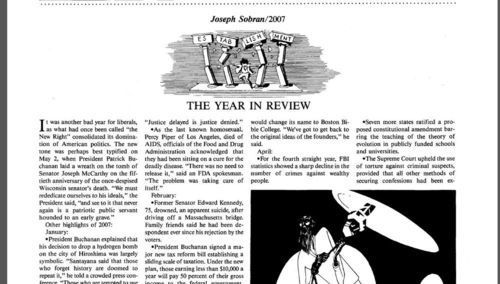 Joe Sobran (1987) On What A CONSERVATIVE Activist Court Might Do

Pat Buchanan wrote the other day that:

If Mitch McConnell's Senate can confirm his new nominee for the Supreme Court, President Donald Trump may have completed the capture of all three branches of the U.S. government for the Republican Party.

Not bad for a rookie.

And the lamentations on the left are surely justified.

For liberalism's great strategic ally and asset of 60 years, the judicial dictatorship erected by Earl Warren and associates, may be about to fall.

Judicial supremacy may be on the way out.

Another constitutionalist on the court, in the tradition of Antonin Scalia, could ring down the curtain on the social revolution the court has been imposing since the salad days of Chief Justice Earl Warren.

The nomination of the Ann Coulter approved Brett Kavanaugh

In moments of great import, you can always count on @realDonaldTrump.

brings up the question of what a conservative court might do.

To somewhat recycle something from last year, which I wrote in response to a Glenn Reynolds op-ed on A 'living Constitution' on the right, what might a Trump Court do, or putting it another way, what is the Left afraid it might do?

In 1987, I read a satirical article by the late Joe Sobran about a possible conservative future. It was not what Sobran wanted, but what a liberal would fear.

It’s called 2007/The Year in Review, by Joseph Sobran, The American Spectator, December 1987 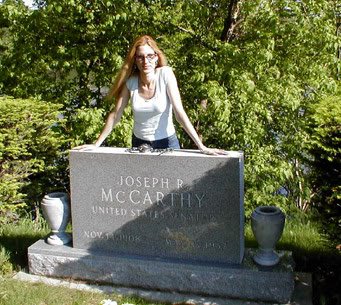 It was another bad year for liberals, as what had once been called "the New Right" consolidated its domination of American politics. The new tone was perhaps best typified on May 2, when President Patrick Buchanan laid a wreath on the tomb of Senator Joseph McCarthy on the fiftieth anniversary of the once-despised Wisconsin senator's death. "We must rededicate ourselves to his ideals," the President said, "and see to it that never again is a patriotic public servant hounded to an early grave."[Pictured right: Ann Coulter visits Senator McCarthy's actual grave.]

Here are what was imagined for the Supreme Court in an alternate-universe 2007.

Of course, it turns out to have been a dream. A bad dream, by a Democrat:

Milton Grimsby bolted up in bed. His pajamas were soaked with sweat. He looked around the bedroom.It was still 1987. His wife was already dressed and ready to go to her law office. "Oh Megan," he said, "I've had the most awful dream—...

Milton swung stiffly off the bed and pulled on his robe. The world was starting to seem normal again, but he had to make sure. He hurried into the living room and opened the front door and looked down. Yes, the Washington Post was on the porch.

Read the whole thing, which is very funny. Oh, and Milton, if you’re out there? The Post isn’t on the porch anymore.