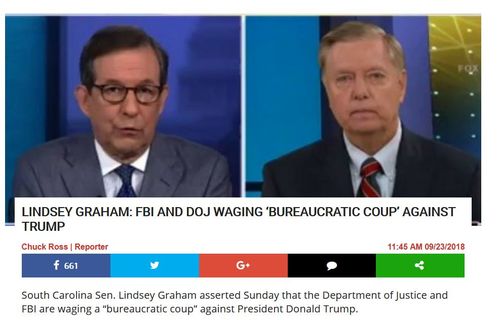 Thursday is shaping up to be the Trump presidency's "Gunfight at O.K. Corral."

That day, the fates of Supreme Court nominee Brett Kavanaugh and Deputy Attorney General Rod Rosenstein, and much else, may be decided.

The New York Times report that Rosenstein, sarcastically or seriously in May 2017, talked of wearing a wire into the Oval Office to entrap the president, suggests that his survival into the new year is improbable.

Whether Thursday is the day President Donald Trump drops the hammer is unknown.

But if he does, the recapture by Trump of a Justice Department he believes he lost as his term began may be at hand. Comparisons to President Nixon's Saturday Night Massacre may not be overdone.

The Times report that Rosenstein also talked of invoking the 25th Amendment to remove Trump suggests that Sen. Lindsey Graham had more than a small point on "Fox News Sunday": "There's a bureaucratic coup going on at the Department of Justice and the FBI, and somebody needs to look at it."

Indeed, they do. And it is inexplicable that a special prosecutor has not been named. For while the matter assigned to special counsel Robert Mueller, to investigate any Trump collusion with Russia in hacking the emails of the Clinton campaign and DNC, is serious, a far graver matter has gotten far less attention.

To wit, did an anti-Trump cabal inside the Department of Justice and the FBI conspire to block Trump's election, and having failed, plot to bring down his presidency in a "deep state" coup d'etat?

Rosenstein's discussion of wearing a wire into the Oval Office lends credence to that charge, but there is much more to it.

The story begins with the hiring by the Clinton campaign, though its law firm cutout, in June 2016, of the dirt-divers of Fusion GPS.

What his Russian friends provided was passed on by Steele to his paymaster at GPS, his contact in the Justice Department, No. 3 man Bruce Ohr, and to the FBI, which was also paying the British spy.

The FBI then used the dirt Steele unearthed, much of it false, to persuade a FISA court to issue a warrant to wiretap Trump aide Carter Page. The warrant was renewed three times, the last with the approval of Trump's own deputy attorney general, Rosenstein.

Regrettably, Trump, at the request of two allies—the Brits almost surely one of them—has put a hold on his recent decision to declassify all relevant documents inside the Justice Department and FBI.

Yet, as the Wall Street Journal wrote Monday, "As for the allies, sometimes U.S. democratic accountability has to take precedence over the potential embarrassment of British intelligence."

Thursday's meeting between Trump and Rosenstein will coincide with the Judiciary Committee's hearing into the charge by Dr. Christine Blasey Ford that, as a 15-year-old, she was sexually assaulted by 17-year-old Brett Kavanaugh, Trump's nominee to the Supreme Court.

This weekend brought fresh charges, from a Yale classmate of Kavanaugh, Deborah Ramirez, that at a drunken party in their freshman year, Kavanaugh exposed himself.

Kavanaugh has fired off a letter to Sens. Chuck Grassley and Dianne Feinstein, chairman and ranking member of the Judiciary Committee, calling the accusations "smears, pure and simple."

What is at stake in Thursday's appearance by Kavanaugh and Ford is huge. A successful defense of his good name could mean Kavanaugh's swift elevation to the high court, a historic victory for the GOP's judicial philosophy, and the culmination of a decades-long campaign dating back to the Earl Warren era of the Supreme Court.

As for the judge himself, the issue is not just his behavior as a teenager and university student, but his credibility and honor as a man.

He has asked friends and allies to trust and believe him when he says that he is a victim of a character assassination steeped that is rooted in ideology and lies.

Thus far, no credible individual has come forward to corroborate the charges against him when he was at Georgetown Prep or at Yale. And almost all who knew him testify to his character.

We are often told that the moment we are in has historic significance and will be long remembered. Yet, how many can still recall what the "resister" in the Trump White House or Cabinet wrote in his or her anonymous op-ed in the New York Times?

How Kavanaugh conducts himself Thursday, however, and whether he is elevated to the court, could decide the fate of constitutional conservatism and the Republican Congress in 2018.