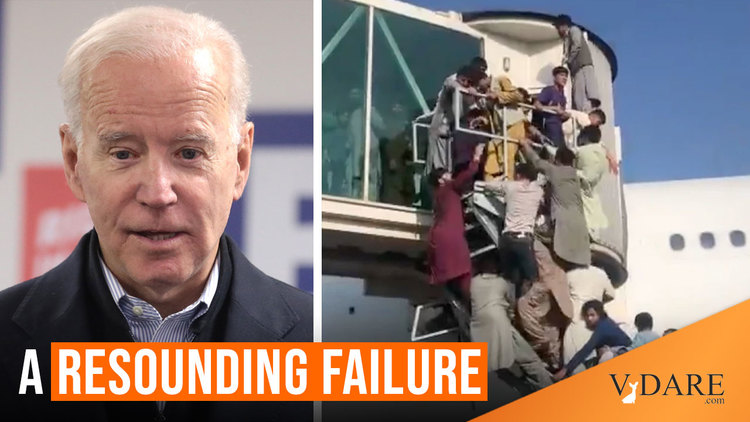 Less than a week into the chaotic U.S. withdrawal at Hamid Karzai International Airport, a CBS poll found that Americans, while still approving of President Joe Biden's decision to get us out of this "forever war," were stunned by how badly botched the withdrawal was being executed.

Biden's own approval rating has plummeted to 50%, the lowest of his presidency. Yet, the disastrous debacle at Kabul airport is by no means played out. It may yet become worse, far worse.

For it is difficult to believe the United States can get all its citizens out by Biden's deadline of Aug. 31, and impossible to believe we can withdraw all of our imperiled Afghan allies from that 20-year war who today live in terror for themselves and their families.

And there is a certainty—indeed, it is already happening—that some of those left behind will be subjected to atrocities by rogue elements of the Taliban, if not its leadership. Those atrocities will make for film and footage in the Western press, underscoring the failure of the United States to rescue allies it left behind.

And, with reports already emanating from Afghanistan about food shortages, the country could become a human rights hellhole by fall.

Consider. The Taliban may have been able to overrun 15 provincial capitals and Kabul in a week. But the government officials running those cities cannot readily be replaced by Taliban fighters whose vocation for the last two decades has been fighting a terrorist-guerrilla war.

While the triumphant Taliban have no interest in a renewed war with the United States, they do have an ideological interest in trumpeting their triumph over the superpower and rubbing America's nose in its defeat.

What, then, are the consequences of America's humiliation?

Biden's reputation as a capable veteran of half a century at the highest levels of the U.S. government is being daily deconstructed.

The United States is being portrayed in the world's media as "a pitiful, helpless giant," in former President Richard Nixon's phrase. And that is the America whose public face today is that of Joe Biden.

As for the American people's appetite for intervention in future wars for democracy and nation building, that is almost surely gone.

Nations that have relied on the U.S. to come fight their wars for them should probably be raising their defense budgets.

Billions of dollars in U.S. military equipment—armored vehicles, Black Hawk helicopters, drones, artillery, mortars, thousands of rifles and thousands of tons of munitions—have been lost. Some of this will end up in Russia and China, with some of it transferred to ISIS and al-Qaida.

And, lest we forget, other dominos did fall in the wake of America's strategic defeat in Vietnam. Cambodia fell to Pol Pot's genocidal Khmer Rouge. Laos fell to the Communists.

Ethiopia fell to the Derg in East Africa. The former Portuguese colonies of Mozambique and Angola fell to the Communist bloc. Marxists took over Grenada in the Caribbean. The Sandinistas took Nicaragua.

At the end of the 1970s, our Near East ally, the shah of Iran, was overthrown, and an anti-American Islamic republic led by Ayatollah Ruhollah Khomeini was established.

In 1979, the Soviet Union invaded Afghanistan.

Across the Atlantic, "Euro-communism" took root.

The perception that President Jimmy Carter did not understand the character and purpose of our Communist enemies, and that Ronald Reagan did, was high among the reasons the country took its gamble on the Gipper.

That another casualty of the Afghan fiasco is Biden's credibility is his own doing. Repeatedly, in recent days, what Biden predicted would never happen did happen. And the president made statements seemingly disconnected to the events on the ground in Kabul.

Often last week, Biden gave off the image of a befuddled man who did not understand what was going on or know what he was doing. Nor are Republicans alone in making the point. Democrats and NATO allies are saying the same thing.

One of the principal casualties of Kabul is the establishment's grand vision of a U.S. foreign policy for the new century—where liberalism and democratic capitalism have won the battle for the future, and the U.S., victorious in the Cold War, would lead the world in the realization of a new world order where we would write the rules and police the planet.

Biden depicted that new world struggle as between democracy and authoritarianism, and America as leading mankind toward the triumph of democracy.

The debacle in Kabul begins Biden's leadership of that struggle with America's worst humiliation in living memory.