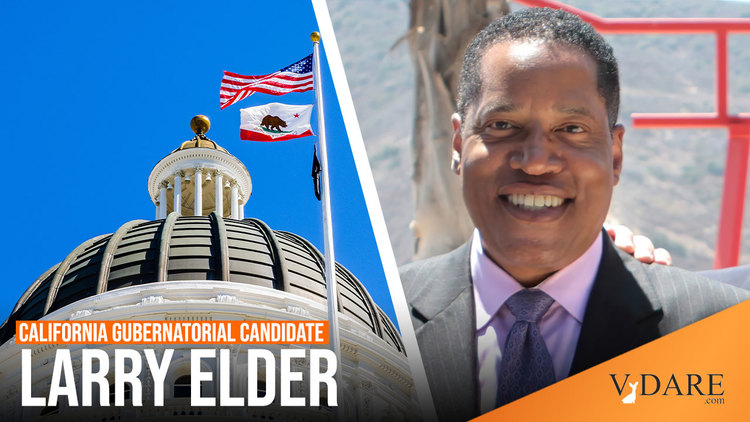 Earlier (2000): Things Even Larry Elder Can't Say (Immigration Is One)

Black conservative radio host Larry Elder’s bid to become Governor of California obviously has the Regime Media worried. He’s even been accused of being “shaped” by American Renaissance Editor Jared Taylor and VDARE.com! Not enough, unfortunately: although Elder has said some good things over the years, he never mentions immigration on the campaign trail, preferring to stick to Conservatism Inc. (and donor) favorites like school choice. Maybe that will work—California Governor Recall Polls: Newsom is losing momentum, CrowdWisdom.com, August 23, 2021. But it’s a missed opportunity. 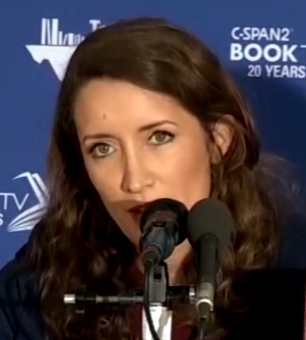 The ridiculous smear that “Elder’s views were shaped by Taylor…a leading white supremacist Elder has repeatedly cited in his articles and books” (links in original) was made by Hispanic Affirmative Action beneficiary Jean Guerrero [Tweet her] in If Larry Elder is elected, life will get harder for Black and Latino Californians, LA Times, August 18, 2021. In a devastating response [And They Wonder Why We Despise Them,  American Renaissance, August 23, 2021]  Taylor has pointed out that he’s not spoken to Elder for over 20 years—and that the black crime data Elder cited, which Guerrero tries to bury in various innumerate ways, has actually gotten worse.

Guerrero added: “Elder also featured the white nationalist site Vdare, with its stated mission to defend the country’s ‘racial and cultural identity’ on his website in 2016.” (Links in original). In 2016! Needless to say, she does not mention that this one (1) link was to VDARE.com’s reporting the interesting fact that Black Muslim convert Muhammed Ali opposed interracial marriage. (Guerrero apparently likes this “influenced by” smear: she has also tried to prove that Trump immigration consigliere Stephen Miller was Influenced by VDARE.com Editor Peter Brimelow).

At first glance, Elder is a promising candidate given his opponents. Establishment favorite and former San Diego Mayor Kevin Falconer was Never Trump in 2016, and is on record declaring Trump’s rhetoric “unacceptable” and that he “could just never support him.” His campaign team also called a border wall “economically irresponsible” while conveniently ignoring that the average immigrant is a net burden on the federal (and California state!) governments [Faulconer: No Trump; No Border Wall, by Wendy Fry, NBC San Diego, June  8, 2016].

Veteran California Republican Bill Saracino writes that when Falconer took office, Republicans were close to a majority on the San Diego City Council; when he left, just one Republican remained [California Respects Its Elder As the GOP Tries Suicide, California Political Review, August 2, 2021]. He also notes that Republican voter registration in San Diego dwindled under Falconer’s tenure. While Falconer claims he voted for Trump in 2020, this was more likely a political stunt for career advancement rather than a genuine change of heart.

Meanwhile, transgender celebrity Caitlyn Jenner is another generic Conservatism Inc. favorite. She supports the usual safe issues—tax cuts, deregulation, and job growth—but wants a pathway to citizenship for illegal aliens living in the United States [Jenner says she's 'kind of' a Republican, by Jeremy B. White and Carla Marinucci, Politico, May 10, 2021]. Jenner is the personification of the Conservative Establishment’s endless concessions on social issues. Republican gatekeepers supporting a transgender candidate to show that Democrats are “the real transphobes” is certainly a new low. However, her campaign is apparently in trouble—while she initially gained traction via name recognition, her campaign is in debt and her poll numbers are shrinking.

Failed 2018 gubernatorial candidate John Cox is a mixed bag. He rightly targets the state’s ballooning homeless numbers, the corrupt state bureaucracy, and California’s rampant disregard for immigration laws. Nonetheless, he dutifully betrayed supporters of Patriotic Immigration Reform in 2018 by opposing “family separations'' at the border [John Cox says he opposes family separations at border, echoes Trump's call for congressional action, by Eric Ting, SFGATE June 19, 2018]. He is silent on legal immigration, and does not seem to realize how changing demographics are the main culprit for his 2018 defeat. Cox also lacks charisma, giving off “low energy” vibes reminiscent of Jeb!’s failed 2016 presidential run. He is originally from out-of-state, giving media outlets an excuse to label him a “carpetbagger”.

Finally, there’s California State Assemblyman Kevin Kiley, 36. Kiley certainly has a bright future in California politics—he is a solid conservative who could perhaps be swayed on key issues like immigration. He is a native Californian, born in, and representing, the Sacramento area, who is young and articulate.

However, Kiley’s youth is also a weakness. For all his flaws, Governor Newsom is a seasoned politician who has been in public office for 24 years. He also enjoys support from all major newspapers and media outlets within the state, and can only face serious opposition from a candidate with comparable experience.

Elder counters these candidates in many ways. While Falconer further disavowed Trump when the Access Hollywood tape surfaced, Elder defended Trump on Twitter; while Jenner defends “trans rights,” Elder debunks Black Lives Matter; while John Cox is slow and low energy, Elder is enthusiastic and articulate; while Kiley is inexperienced, Elder has 30 years of experience in the world of politics. Elder understands tone and optics better than all of the other GOP candidates put together.

On immigration, Elder goes as far as one can go while still being considered “mainstream.” In a January 2016 interview on the Rubin Report, Elder talked about how “the country has changed” because of both illegal and legal immigration. He correctly brought up that the Democratic Party has not won the white vote since 1964, and that “the more people of color there are in the country, the better the left does.” It is fair to say that Elder is at least privately aware of demographics’ role in electoral politics. He’s certainly more vocal than most conservatives on the issue.

And we have the LA Times’ Guerrero’s word that

Elder doesn’t believe in sanctuary laws or citizenship for Dreamers. He’s against in-state tuition, healthcare and driver’s licenses for the undocumented. He opposes birthright citizenship [Link in original]

Alas, supporters of Patriotic Immigration Reform should not get their hopes up. Here’s why.

Elder comes from a profession dependent on sponsors, who threaten to drop a host the moment there is a “controversy.” Leftists have made numerous attempts to pressure sponsors to drop conservative radio hosts, including Sean Hannity, Laura Ingraham, and, most notably, Rush Limbaugh. Tucker Carlson has lost several sponsors for discussing the negative effects of immigration. As VDARE.com editor Peter Brimelow put it earlier this year, “Patriotic Immigration Reform is simply not good for media careers.”

Thus, we can expect Elder to keep his campaign in “safe” territory rather than discuss “controversial” issues. As the late Dan Seligman pointed out when reviewing Elder's anti-PC book The Ten Things You Can't Say in America for VDARE.com in the year 2000, one of the things Elder wasn't willing to say was anything at all about immigration.

Of course, Elder is still vastly better than the other GOP candidates. The first GOP primary debate between Falconer, Cox, and Kiley was difficult to watch (Elder and Jenner did not attend). While the candidates made some commonsense points on homelessness and government bureaucracy, none of them had an answer when asked how they’d advance their agenda in a legislature with a Democratic supermajority. When discussing inflated home prices, corruption, and lawlessness, nobody acknowledged the underlying cause—immigration—of these problems. Rather than calling Critical Race Theory anti-white, the candidates feebly asserted that CRT “divides us” and teaches “the opposite of what our country should teach.” Elder arguably won the debate without even attending.

However, Elder hasn’t said anything promising on immigration in recent years. In June 2019, he tweeted a quote by Barbara Jordan asserting that illegal immigration “erodes” legal immigration. Immigration is not mentioned once on his campaign website, nor has it been covered in his campaign press releases. Elder has yet to take a policy position on either the current border crisis or Biden’s Amnesty plan. A search of his Twitter profile for the world “Amnesty” shows he’s historically taken the generic conservative position on amnesty: it is bad because it rewards rule breakers, not because immigration is inherently bad, both economically and culturally, for the Historic American Nation. Elder also made it clear in mid-July that immigration will not be his main issue while campaigning. Rather, he will focus on school choice, a typical conservative talking point that is unlikely to energize the California GOP base (what is left of it anyway).

Of course, this is all predicated on a big “if”—Elder winning the election. For starters, he would be running as a Republican in a state where whites make up just 37% of the population. California has not elected a Republican governor since 2006 and last voted for a Republican president in 1988. Orange County, once a 2–1 Republican stronghold, now votes blue just like every other metropolitan area in the state.

Personally, I do not see how any Republican can win statewide office with its current demographics. The Los Angeles Times ecstatically agrees[ California’s changing demographics will further doom Republicans, by George Skelton, November 18, 2019]. But the peculiar design of the Recall election makes it possible for a candidate to win with a minority of the vote.

At best, Elder will win the election and address illegal immigration while doing nothing about the legal invasion of the Golden State. He could also get elected and get nothing done as Democrats block any change with their veto-proof supermajority.

Regardless of what happens, supporters of Patriotic Immigration Reform still have no voice and no representation in California. Incredibly, the issue has not surfaced in a state-wide election since Governor Peter Wilson’s re-election in 1994.

California’s fate is predictable yet tragic. It is heartbreaking to watch one of the greatest places in the world—with its stunning natural beauty, wonderful year-round weather, and agricultural abundance—waste all of this as a result of becoming a multicultural experiment. It is depressing that even a strong candidate like Elder dare not challenge the harmful policies plaguing the Golden State due to permanent demographic change.

However, there is a silver lining. Let this be a warning sign for patriots all over the rest of the country. If Patriotic Immigration Reform does not materialize, this can and will happen to your state, your county, your city, and your neighborhood. It is a matter of “when,” not “if.”

Make California an example, not a preview.

Eric Matthews [Email him] is a proud American Patriot who fights for his people. He has the misfortune of currently residing in the Beltway.