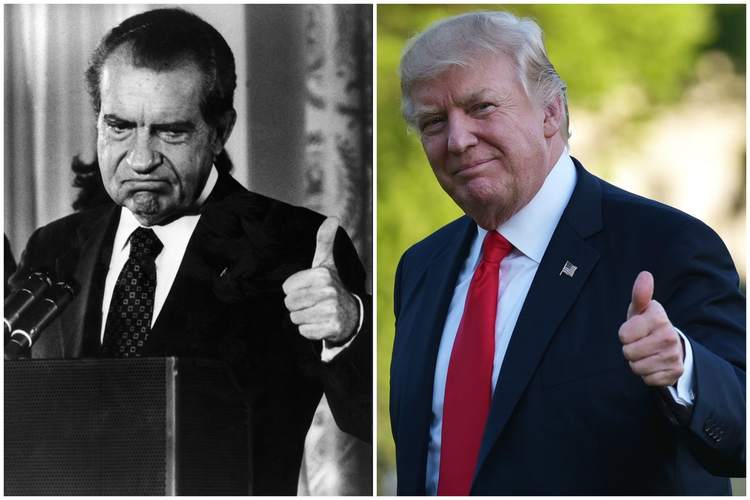 "History is repeating itself, and with a vengeance," John Dean told the judiciary committee, drawing a parallel between Watergate, which brought down Richard Nixon, and "Russiagate" which has bedeviled Donald Trump.

But what strikes this veteran of Nixon's White House is not the similarities but the stark differences.

Watergate began with an actual crime, a midnight break-in at the offices of the DNC in June 1972 to wiretap phones and filch files, followed by a cover-up that spread into the inner circles of the White House.

Three years after FBI Director James Comey began the investigation of Trump, however, the final report of his successor, Robert Mueller, found there had been no conspiracy, no collusion and no underlying crime.

How can Trump be guilty of covering up a crime the special counsel says he did not commit?

During Watergate, Nixon had little support in a city where the elites, the press, the Democratic Congress and the liberal bureaucracy labored in earnest to destroy him. Nixon had few of what Pat Moynihan called "second and third echelons of advocacy."

Contrast this with Trump, a massive presence on social media, whose tweets, daily interactions with the national press and rallies keep his enemies constantly responding to his attacks rather than making their case.

Trump interrupts their storytelling. And behind Trump is a host of defenders at Fox News and some of the top radio talk show hosts in America.

There are pro-Trump websites that did not exist in Nixon's time, home to populist and conservative columnists and commentators full of fight.

Leftists may still dominate mainstream media. But their unconcealed hatred of Trump and the one-sided character of their coverage has cost them much of the credibility they had half a century ago.

The media are seen as militant partisans masquerading as journalists.

Two years after the Watergate break-in, Nixon was near the end, about to be impeached by the House with conviction possible in the Senate.

Three years into Russiagate, 3 in 4 House Democrats do not want their caucus to take up impeachment. Many of these Democrats, especially moderates from swing districts, do not want to cast a vote to either bring down or exonerate the president.

Assume the House did take up impeachment. Would all the Democrats vote aye? Does anyone think a Republican Senate would deliver the needed 20 votes to provide a two-thirds majority to convict and remove him?

For a Republican Senate to split asunder and vote to expel its own Republican president who is supported by the vast majority of the party would be suicidal. It could cost the GOP both houses of Congress and the White House in 2020. Why would Republicans not prefer to unite and fight to the end, just as Senate Democrats did during the Clinton impeachment?

Trump's support in the Republican caucus in the Senate today is rock solid. Speaker Nancy Pelosi is herself opposed to impeachment hearings in the House, considering them ruinous to her party's hopes of maintaining control in 2020.

When Dean went before the Watergate committee of Sen. Sam Ervin in 1973, all five days of his testimony were carried live on ABC, CBS and NBC.

When Dean appeared Monday, the three cable news networks swiftly dropped coverage of the judiciary committee hearings to report on a helicopter crash in mid-Manhattan. Dean's testimony could be seen on C-SPAN3.

Much of America is bored by the repetitive, nonstop media attacks on Trump, and look on the back-and-forth between left and right not as a "constitutional crisis" but as a savage battle between parties and partisans.

The impeachers who seek to bring down Trump face other problems.

Now that Mueller has spent two years and found no evidence of a Trump-Putin conspiracy to hack the emails of the DNC and Clinton campaign, questions have arisen as to what the evidence was that caused the FBI to launch its unprecedented investigation of a presidential campaign and a newly elected president.

Did an anti-Trump cabal at the apex of the FBI and U.S. security agencies work with foreign intelligence, including former British spy Christopher Steele, to destroy Trump?

The political dynamic of Trump's taunts and defiance of the demands of committee chairs in a Democratic House, and the clamor for impeachment from the Democratic and media left are certain to produce more calls for hearings.

But if the impeachment hearings come, they will be seen for what they are: An attempted coup to overthrow a president by the losers of 2016 who are fearful they could lose again in 2020 and be out of power for four more years.

Russiagate is not Watergate, but there is this similarity:

Nixon and Trump are both the objects of a truly great hatred.