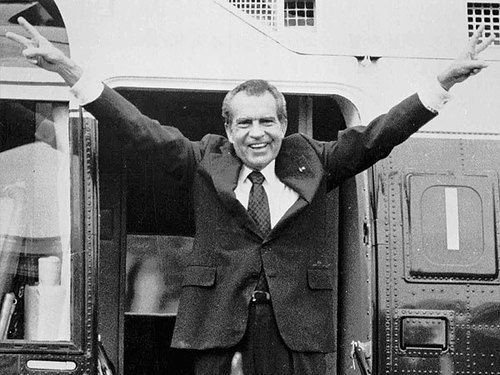 The Plot to Destroy Nixon

In his new biography Being Nixon: A Man Divided, Evan Thomas concedes a point. Richard Nixon, he writes, "was not paranoid; the press and the 'Georgetown set' really were out to get him."

Carl Bernstein's review found Thomas' book deficient in its failure to chronicle the "endemic criminality" of the Nixon presidency.

Yet, recent revelations suggest that "endemic criminality" is a phrase that might well be applied to the newsroom of The Washington Post when Bob Woodward and Bernstein worked there.

Consider. In All the President's Men, Woodward and Bernstein admit that, in collusion with Post editors and with the approval of Post lawyers, they approached half a dozen Watergate grand jurors.

Admitting this was a "seedy venture," they assured us no grand juror had violated his or her oath, and they got nothing.

Yet, from recent books by Jeff Himmelman about Ben Bradlee, Max Holland about Mark Felt, a.k.a. "Deep Throat," and Geoff Shepard's The Real Watergate Scandal: Collusion, Conspiracy, and the Plot That Brought Nixon Down, out today, the truth is otherwise.

Woodward and Bernstein deceived us about not breaching the grand jury.

They had. The source identified in their book as "Z," a "woman ... in a position to have considerable knowledge of the secret activities of the White House and CRP [Committee to Re-Elect the President]" was a grand juror.

Notes of Bernstein's conversation with this woman were found by Himmelman in Bradlee's files. Post editor Barry Sussman also told Alan Pakula, who made the movie starring Robert Redford and Dustin Hoffman, that Carl had breached the grand jury.

What does this tell us?

Woodward and Bernstein lied for four decades in denying their success in breaching the grand jury. And Bradlee knew they had been lying.

When Post lawyer Edward Bennett Williams had his ex parte contact with old friend Judge John Sirica, to put the fix in and get the judge not to expose or punish Woodward and Bernstein, Williams almost surely knew the reporters were lying.

In his memoir, Judge Sirica reveals what he would have done had Bernstein and Woodward gotten a grand juror to violate his oath:

"Had they actually obtained information from that grand juror, they would have gone to jail."

Thus, Woodward and Bernstein, with the collusion of Post editors and lawyers, got a grand juror to violate her oath and spill secrets. Then Bradlee got E. B. Williams, godfather to Sirica's daughter, to put the fix in with that compliant judge, and all of them covered up the conspiracy.

While pursuing Nixon, the "Georgetown set" was hiding the same sort of mendacities and obstruction of justice that got Nixon's men prison time.

Nor does it stop there.

As we discovered a decade ago, "Deep Throat," whose moniker came from a dirty movie, was FBI Deputy Director Mark Felt.

In giving Woodward information from witness testimony to the grand jury, Felt was violating his oath and engaged in criminal misconduct, which, exposed, would have gotten him fired in disgrace and put in prison, and Woodward implicated as the beneficiary of his crimes.

Woodward and Bernstein benefited mightily from the fruits of Felt's criminality, getting a Pulitzer for the Post, and having their careers made by collusion with this corrupt civil servant and serial lawbreaker.

The subtitle of the new paperback of All the President's Men is, "The Greatest Reporting Story of All Time."

Excuse me, but how much reporting does it take to scribble down notes from Mark Felt telling you who said what to the grand jury that day?

This is stenography, not reporting.

Felt sought to cast acting FBI Director Pat Gray, an honorable man, as an incompetent who could not keep secrets. This would result in Gray being passed over for permanent director. With the FBI top job open, President Nixon would likely turn to—Deputy Director Mark Felt.

Of all the Watergate offenses of the Nixon White House, the "Huston Plan" is often called the most terrifying. And what was the plan worked up by my old friend Tom Charles Huston in 1970?

After Black Panthers began murdering cops and a Greenwich Village bomb factory—where an anti-personnel bomb was being prepared to massacre noncommissioned officers and their dates at a dance at Fort Dix—blew up, Huston, with CIA, National Security Agency and Defense Intelligence Agency backing, urged the reinstatement of FBI practices used from FDR to LBJ.

These included warrantless wiretaps and surreptitious entries, "black-bag jobs," to stem the epidemic of terror bombings.

And who had been in charge of FBI black-bag jobs in the LBJ era?