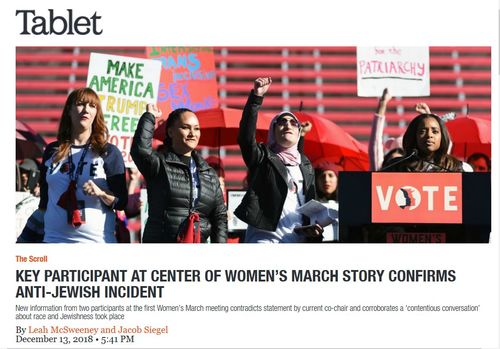 Jewish publications have been getting worked up lately over how several of the celebrated leaders of the anti-Trump Women’s March are big fans of the anti-Semitic Louis Farrakhan and employed the Black Muslims’ bully boy squad, Fruit of Islam (or “Fruit” for short … yeah, that’s the name), as security. The details nicely illustrates Ann Coulter’s point, which she made talking about Farrakhan supporters starting the Women’s March, about how the only thing intersectionalists can come together over is hating the White Man.

ANDREW LAWRENCE LOVES HITLER! (Closer to truth than "her version of the Dem Party." No, it's my reaction to FARRAKHAN SUPPORTERS IN THE WOMEN'S MARCH.) https://t.co/aR6pyhwZ1m

The story is kind of boring and complicated to follow, so I’ve abridged it and added the intersectional IDs of the various leaders of the Women’s March. From Tablet:

On Dec. 10, Tablet published an article about the Women’s March. The piece opened with a description of the first-ever meeting of the nascent organization, during which—according to multiple sources who spoke with Tablet about the exchange–two of its current co-chairs were said to have directed anti-Jewish statements at Vanessa Wruble [Jewish], one of the other women present.

Reached by Tablet today, Wruble confirmed the account as described in the original story. …

[Cassady] Fendlay [white] told Tablet that she definitely did not recall the specific claims described as having been made, but, in opposition to [Tamika] Mallory [black] and [Bob] Bland’s [uh ... "Bland was praised for her complex stance as being both beneficiary of white privilege, as a white woman, and fighting for change as a minority, trans-woman, non-binary," so there you go] initial statement, noted that the meeting was indeed heated at distinct points—including around the subject of Jews and Jewishness. “I do remember this conversation being contentious,” she said. “I do remember specifically Vanessa Wruble [Jewish] saying Jewish people don’t count, Jewish people aren’t white—basically saying like all the stuff that you’re saying doesn’t apply to me. And I do remember that sparking a response.”

Fendlay [white] continued: “I personally am committed to, this is why I show up in the movement, and I’m all about holding whiteness accountable—regardless of the religion of the white person.” …

Asked about Tablet’s report that Mallory [black] or [Carmen] Perez [Latinx] had asserted Jews were leaders in the slave trade—a regular drumbeat of Louis Farrakhan’s—Fendlay [white] said she “never heard anything said about that in everything that I have ever experienced working with these women. It doesn’t even make sense.” In a tweet last month, Fendlay [white] wrote: “White people are to blame for the suffering of African Americans. Those white people have been all different faiths & they justified themselves, it’s certainly not their religions’ fault. The Jews who participated in the slave trade were abetting many anti-Semites in the South.”

For her part, Wruble [Jewish] is hoping to move on. “Any activity people engage in is poised to be influenced by conscious and unconscious biases. We all have them,” she said. “I, too, want to fight the systems that uphold white and male privilege. But right now we are being pitted against one another, and I’m seeing conservatives use the controversies to undermine the women’s march movement as a whole. I refuse to let that happen. I am a proud culturally Jewish progressive and intend to work with progressives everywhere to fight back against the bad policies that, frankly, white men [white, male] have been imposing on all of us. That has to be our priority moving forward.”

Progressives everywhere must unite to fight the white (man).