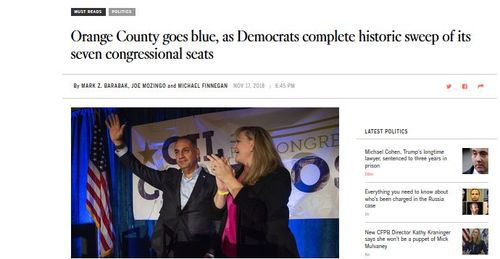 A Reader Mourns The Loss Of Orange County, CA, Not Only To The GOP, But To America

From: Jan [Email her]

When I was growing up in California, Orange Country was notorious for being Super Conservative.  It was 92% white and incredibly prosperous. The airwaves were filled with Cold War Warriors warning against Communism. All the big defense companies were headquartered there. TRW, McDonnell Douglas, General Dynamics, Hughes Helicopter. It was a place that elected several open members of The John Birch Society to Congress. The airport is still the John Wayne International Airport. Nixon was from OC. Haldeman and Ehrlichman were the “Orange County Boys.” Reagan had a home there. This is what happened in the midterms: Orange County goes blue, as Democrats complete historic sweep of its seven congressional seats, By Mark Z. Barabak, Joe Mozingo and Michael Finnegan, November 17, 2018.

The GOP line for years was pure economics: Defend capitalism, low taxes, and less regulations. A moronic mantra over and over and over. Not a word about immigration, or culture or race that was changing everything all around them. Not a word about the things that actually determine everything  The GOP vacuous morons believed that they could argue Latinos out of Socialism and Welfare...the same Utopian garbage they are doing today as they lose Texas and Florida. And each year another 1.5 million Third Worlders pour in.[‘The Grand Old Party is dead’: Agony in California as Republican losses spiral, By Isaac Stanley-Becker, Washington Post, November 14, 2018]

And then one fine day in 2012 the Orange County GOP woke up and found a dead pig on their doorstep wrapped in barbed wire...a traditional Latin American message to the ruling class to get out of town ..or end up like the pig. [Report: Dead Pig In Romney Shirt Found At Manhattan Beach GOP Headquarters, CBS Los Angeles, November 9,  2012]They ignored the real message. The message that Race is Real and Demographics is Destiny and now they are dead pigs.