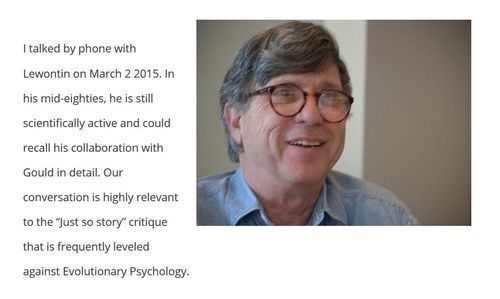 RL: Now I should warn you about my prejudices. Steve and I taught evolution together for years and in a sense we struggled in class constantly because Steve, in my view, was preoccupied with the desire to be considered a very original and great evolutionary theorist. So he would exaggerate and even caricature certain features, which are true but not the way you want to present them. For example, punctuated equilibrium, one of his favorites.

Stephen Jay Gould brought a Marxist perspective to the study of the fossil record. Instead of seeing steady evolution of fossils over the eons, he saw revolution: fossils would stagnate in form for huge periods of time, and then suddenly change, like France from 1789 or Russia from 1917. Gould called this Punctuated Equilibrium.

It’s kind of like the Mexican ex-dictator’s Porfirio Diaz’s observation, after many decades of his uncontested rule, as he was suddenly being bundled onto a steamship to exile in the opening of the vast Mexican Revolution: “Nothing ever happens in Mexico, until it happens.” There’s some wisdom in that, even if it doesn’t immediately suggest an obvious research program.

And … Gould was kind of right about the fossil record. That’s a not unreasonable corrective to the Victorian progressive assumption that evolution implies constant small reforms in fossils over time. But he was also kind of wrong, as well, as a paleontologist. There are also a lot of small changes over time.

He would go to the blackboard and show a trait rising gradually and then becoming completely flat for a while with no change at all, and then rising quickly and then completely flat, etc. which is a kind of caricature of the fact that there is variability in the evolution of traits, sometimes faster and sometimes slower, but which he made into punctuated equilibrium literally. Then I would have to get up in class and say “Don’t take this caricature too seriously. It really looks like this…” and I would make some more gradual variable rates. Steve and I had that kind of struggle constantly. He would fasten on a particular interesting aspect of the evolutionary process and then make it into a kind of rigid, almost vacuous rule, because—now I have to say that this is my view—I have no demonstration of it—that Steve was really preoccupied by becoming a famous evolutionist.

Isn’t it kind of discriminatory that Darwin’s WASP liberal Theory of Evolution is in all the history books, when Gould’s Ashkenazi Marxist Theory of Revolution deserves, in SJG’s mind and that of his many fans in the late 20th Century, to be alongside it?

Ambition in a scientist is, on the whole, a good thing. Gould had ambition galore, along with a pleasing prose style. He made some useful discoveries. I don’t dismiss his punctuated equilibria observation — it seems to me like a useful model to keep in mind, even if it’s undertheorized.

That natural history is kind of like human history is a not worthless observation on Gould’s part. Someday we may be able to see his accomplishments without being distracted by his egomania, lack of needed mathematical skills, and political and ethnic animosities.
[Comment at Unz.com]