Obamnesty’s Internal Contradictions— Its Own Logic Makes It Illegal 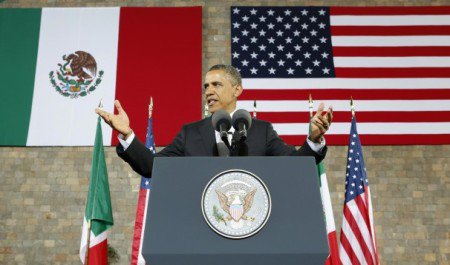 The President of the United States Addresses the People Of Mexico, May 2013

Barack Obama’s Executive Amnesty (“Obamnesty”) is treasonous—but it’s also illegal by its own logic. The only reason Obama can get away with it is because the Main Stream Media is celebrating an executive abuse it would never tolerate from a Republican President.

Here’s the operative language from the law, the Immigration and Nationality Act (INA), as amended, and the relevant section, 212(d)(5)(A):

The Attorney General may, except as provided in subparagraph (B) or in section 214(f) , in his discretion parole into the United States temporarily under such conditions as he may prescribe only on a case-by-case basis for urgent humanitarian reasons or significant public benefit any alien applying for admission to the United States, but such parole of such alien shall not be regarded as an admission of the alien and when the purposes of such parole shall, in the opinion of the Attorney General, have been served the alien shall forthwith return or be returned to the custody from which he was paroled and thereafter his case shall continue to be dealt with in the same manner as that of any other applicant for admission to the United States.

Note that the statute restricts parole authority on these bases: How does the Obama Regime’s Administrative Amnesty violate this law? Thus the Office of Legal Counsel (OLC) recently presented a memo on Barack Obama’s use of Deferred Action for Childhood Arrivals (DACA) to admit Central American “refugees.” This memo also addresses the question of legal authority for Barack Obama’s larger executive Amnesty. The OLC says the President lacks the authority to simply stop enforcing entire categories of immigration law.

As the text of the memo states,

Before DACA was announced, our Office was consulted about whether such a program would be legally permissible. As we orally advised, our preliminary view was that such a program would be permissible, provided that immigration officials retained discretion to evaluate each application on an individualized basis. We noted that immigration officials typically consider factors such as having been brought to the United States as a child in exercising their discretion to grant deferred action in individual cases.

We explained, however, that extending deferred action to individuals who satisfied these and other specified criteria on a class-wide basis would raise distinct questions not implicated by ad hoc grants of deferred action.

We advised that it was critical that, like past policies that made deferred action available to certain classes of aliens, the DACA program require immigration officials to evaluate each application for deferred action on a case-by-case basis, rather than granting deferred action automatically to all applicants who satisfied the threshold eligibility criteria. [Emphasis added]

Furthermore, the humanitarian nature threshold was not met:

We also noted that, although the proposed program was predicated on humanitarian concerns that appeared less particularized and acute than those underlying certain prior class-wide deferred action programs…

Nonetheless, in a clearly foreordained conclusion, the OLC endorsed Obama’s ability to essentially abolish immigration law, despite having just written he was essentially trampling legal precedent by doing so.

…the concerns animating DACA were nonetheless consistent with the types of concerns that have customarily guided the exercise of immigration enforcement discretion.

More importantly, the OLC ignored the fact that Congress specifically outlawed both ad-hoc and systematic amnesties for both legal and illegal aliens by establishing the Temporary Protected Status (TPS) program for humanitarian emergencies involving aliens:

The various unilateral actions presidents had taken to Amnesty small groups of illegal aliens over the years — Extended Voluntary Departure and Deferred Enforced Departure were among the Orwellian euphemisms deployed — were clearly seen as abuses of the discretion which Congress granted the president. TPS was intended to limit that discretion in granting legal status, including work permits, to illegal aliens, by limiting such grants to clearly specified circumstances — such as when a country suffered an earthquake or hurricane — and imposing specific procedures upon the executive.

And to make certain that future executive actions didn't simply become a means of naturalizing entire populations of illegal aliens, the TPS law requires any bill addressing naturalization of TPS recipients has to pass the Senate with a 60 percent super-majority.

TPS also established that legislation may direct the execution of immigration laws. Yet Obama’s courtiers are now arguing that the President has an absolute authority to ignore immigration law. One such defender is Hugh Hewitt’s favorite shyster and taxpayer sponge, Erwin Chemerinsky, [Email him] Dean of the University of California Irvine Law School.

President Obama is soon expected to take a step toward fixing our broken immigration system by issuing an executive order to halt deportations of undocumented immigrants whose children are U.S. citizens. Republicans, including Speaker of the House John Boehner and new Senate Majority Leader Mitch McConnell, have threatened reprisals against such an order. But one thing is clear: The president has the constitutional authority to decide to not proceed with deportations. It has always been within the president’s discretion to decide whether to have the Department of Justice enforce a particular law. As the Supreme Court declared in United States v. Nixon, “the Executive Branch has exclusive authority and absolute discretion to decide whether to prosecute a case.”

[Obama Has the Law—and Reagan—on His Side on Immigration, by Erwin Chemerinsky and Samuel Kleiner, The New Republic, November 18, 2014]

The most fundamental error here: deportations are referred to as “prosecutions”—which they are not. Deportation is a not a criminal prosecution, and is therefore outside of the discretion of the President. Deportations are like any other act that Congress requires the Executive Branch to perform, everything from mundane reports to maintaining an air traffic control system.

In fact, the Executive has admitted that it does not have discretion in other areas of immigration law, such as the fact that the Executive is prohibited from providing a benefit that is not authorized by law. In June, Obama was asking Congress “for new powers” to deals with the Border Surge. He didn’t get them, but asking for them was a recognition that he didn’t have them.

This writer addressed this issue previously when dealing with the Clinton Administration claim to have Amnesty authority. The then-Commissioner of the Immigration and Naturalization Service (INS), Doris Meissner, went so far as to claim that legislative language could be ignored if it was “standard terminology.”

Similarly, today’s OLC recognizes that they can’t simply dismiss the Department of Homeland Security’s responsibility to enforce the law; nor ignore legislation.

Therefore, the OLC’s opinion gets around this with the Kafkaesque maneuver of stating that they are not creating an exemption to an entire category of immigration law, and then later stating that they shouldn’t bother with people in that category anyway.

From the OLC’s memo,

Further, although the proposed policy is not a “single-shot non-enforcement decision,” neither does it amount to an abdication of DHS’s statutory responsibilities, or constitute a legislative rule overriding the commands of the substantive statute. Crowley Caribbean Transp., 37 F.3d at 676–77. The proposed policy provides a general framework for exercising enforcement discretion in individual cases, rather than establishing an absolute, inflexible policy of not enforcing the immigration laws in certain categories of cases…. (10)

But then later within the same memo,

The fact that the proposed program would defer the removal of a subset of these removable aliens—a subset that ranks near the bottom of the list of the agency’s removal priorities—thus does not, by itself, demonstrate that the program amounts to an abdication of DHS’s responsibilities. (28)

How does this play out in practice? Instead of applying “case-by-case” requirements required by law, U.S. Customs and Immigration Enforcement (ICE) is actually providing a “checklist” [PDF] for agents to follow. If illegals simply answer that they were in the country by a certain date or had a child legally present in the country, they will be “released from custody or not removed.” Needless to say, agents are told to “take them at their word.” There is no verification or investigation. [The ICE Guide to Avoiding Deportation in Five Easy Steps, by Jonathan Strong, Breitbart, November 24, 2014]

This approach confirms that the intent of the Amnesty was to abolish immigration law for an entire category of people. Contrary to what the Department of Justice is claiming, the Amnesty isn’t about eliminating an “absolute, inflexible policy”—but about enforcing one by admitting illegals through any means necessary.

And the memo from Barack Obama’s own Department of Justice shows that the Regime knows exactly what it is doing.