NYTimes Says Illegal Alien Job Thieves Are Forced "Back Into Shadows"—No, Not Really

For Saturday’s front page sob story about “migrants,” America’s open-borders propaganda sheet interviewed aliens by name and one was identifiably pictured, so they are hardly hiding from authorities. The government routinely releases violent criminals rather than deport them, so it’s highly doubtful that mere unlawful workers will be given free trips home on the taxpayer’s tab.

The administration has prettied up the numbers to make the employment situation look better than it is. December’s jobless rate was officially 5.6 percent. However, a more realistic number that includes persons who have given up job searching and those working part time who want full time would be considerably higher. Earlier this month, economist Peter Morici observed, “A good notion is that 5.6 percent isn’t real and the real number is 10 percent.”

Americans aren’t fooled by the lies of the administration and its stenographers. A January Fox News poll found 64 percent of citizens believe the economy is still in recession, because it is on Main Street if not on Wall Street.

Gallup CEO Jim Clifton recently called the low unemployment numbers a “big lie” and remarked, “At the recession, we lost 13 million jobs, only three million have come back.” The real level of unemployed is more like 11.2 percent.

In addition, the Center for Immigration Studies found that since 2000, there were two immigrants admitted for each job created in the United States, specifically 18 million foreigners and only 9.3 million jobs.

Nevertheless, the New York Times continues to press on with its stories of illegal aliens with jobs, which is an insult to millions of Americans struggling to find work.

Illegal alien Tomas Pendola has a job teaching high school chemistry in Florida. If he were repatriated, a jobless American teacher could have a position. Teaching used to be a secure middle class profession, but no longer. 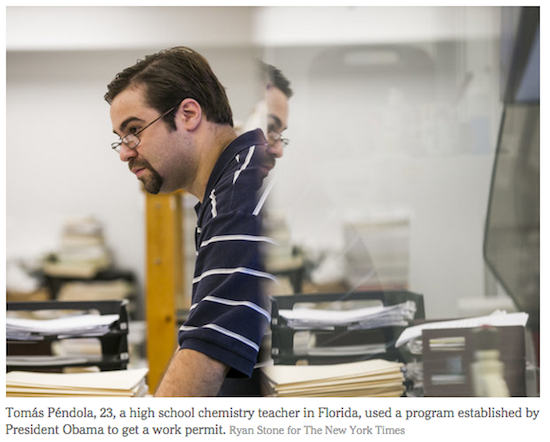 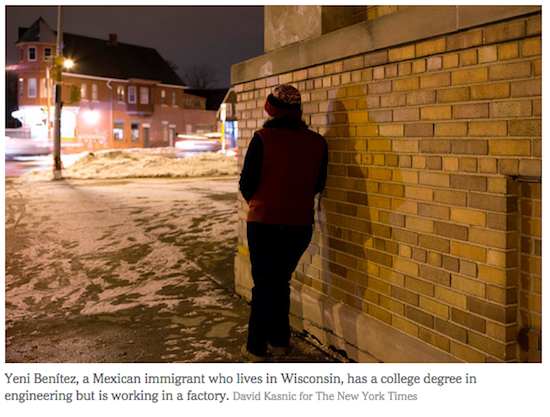 The front-page headline read “Ruling Sends Migrants Back Into Shadows.” But that’s clearly not true: no illegal alien is quitting his ill-gotten American job as a result of Judge Hanan’s ruling temporarily stopping the work-permit amnesty.

They collect their checks and continue to complain about suffering in mean-spirited America. If life in this country is so miserable, they can return to their actual nations of citizenship where their US educations would be very valuable.

Interestingly, those who do return to their native land are often pleased with the results (see Self-Deported Mexicans Happy to Be Home).

KEY BISCAYNE, Fla. — For Tomás Péndola, an immigrant from Argentina, it was a normal week teaching chemistry in a public high school here, filling a whiteboard with dense equations and coaxing his students to decipher them.

For Yeni Benítez, a Mexican immigrant in Wisconsin, this week was when “everything just fell apart.”

Mr. Péndola, who came here with his family when he was 10 and grew up in Florida without immigration papers, has protection from deportation and a work permit under President Obama’s program for unauthorized immigrants, known as Dreamers, who came to the United States as children. Ms. Benítez had been ready on Wednesday to join an expanded version of the program, which was announced by the president in November.

But officials indefinitely postponed the expansion this week after a federal judge in Texas, ruling in a lawsuit by 26 states, said it would impose major burdens on state budgets. On Friday, the administration said it would seek a stay of the Texas judge’s order.

“I’m back to this sense of insecurity, of being afraid every day, every hour, every minute,” said Ms. Benítez, who has a college degree in engineering but is working in a factory. “It really is taking a toll on me.”

Mr. Péndola and Ms. Benítez now stand on two sides of a sharp divide created by disagreements over how far a president can change immigration policy by executive action.

Those like Ms. Benítez, whose hopes were raised by the prospect of the expanded program, must continue to live with fears of being fired or detained. At the same time, they are watching others make progress they hoped to achieve.

Immigrants like Mr. Péndola who participated in the program have seen many doors open. Still, they worry about how the fiercely contested politics of immigration could affect their fate.

Mr. Péndola was finishing a college degree in chemistry, but before the program the best job he could get was selling magic tricks in a Miami tourist shop. With his work permit and Social Security number from the initiative, known as Deferred Action for Childhood Arrivals, or DACA, Mr. Péndola, now 23, was able to get a driver’s license and buy his own car, freeing him to commute to college and work without fear of being pulled over by the police.

After his college graduation, the high school where he had been a standout science student asked him to come back as a teacher. At the MAST Academy in Key Biscayne, a magnet school that draws science students from across the Miami area, he is earning a steady official paycheck, with his tax withholding in order. And he is loving his work.

“This is a very nerdy school where the kids are encouraged to be curious,” Mr. Péndola said in his laboratory after an advanced chemistry class. “I like being able to excite them about chemistry, which is not normally everyone’s favorite subject.”

Nearly 640,000 young immigrants have received protection since 2012. As many as 270,000 others could be eligible under the new rules. The immigrants, most of whom came with parents and either crossed the border illegally or overstayed legal visas, receive temporary work authorization but no lasting legal immigration status.

Ms. Benítez, who has lived in the United States since she was 13, is now 36. She was too old in 2012 for the age limit of 30 in the program. Under the expansion, Mr. Obama eliminated that age cap. He also reset the date by which applicants must have been in the United States from June 2007 to January 2010 and extended the term of the deportation deferrals from two years to three.

Ms. Benítez’s mother is a legal resident, and several siblings are American citizens. In 2004 she applied through the legal system for a resident green card, but because of vast backlogs she still has many years to wait.

With a 10-year-old daughter who is a citizen, Ms. Benítez would also be eligible for the other program the court order suspended, for as many as four million undocumented parents of citizens or legal residents. It had been scheduled to begin in May.

Ms. Benítez graduated from the University of Wisconsin-Milwaukee, with an engineering degree. But she has been clinging to a job as a quality control manager on a castings production line, relying on car pools to get to work and keeping quiet about her legal status.

“You can’t show your face because you are holding on to the one job that will feed your family,” she said.

She hired a lawyer and assembled years of tax returns and bills for her application, laying plans to get a data job and apply to graduate school. Then she heard the news of the injunction.

In his opinion blocking the expanded initiative, Judge Andrew S. Hanen of Federal District Court in Brownsville, Tex., explicitly did not evaluate the original program. He found that the new initiatives would strain state budgets and ruled that Mr. Obama should have allowed public comment before he started them.

Recent scholarship, though, supports what young people have said about the changes they see. In a new study by the Center for Comparative Immigration Studies at the University of California, San Diego, 79 percent of youths with deportation deferrals said they were earning more in better jobs, gaining financial independence. Some 41 percent said they had returned to college after dropping out.

“The huge emotional burden of having to lead a clandestine life has been lifted,” said Wayne Cornelius, a political scientist who was an author of the study.

No longer dependent on proxies, they opened bank accounts and signed leases and mobile phone contracts in their own names. They found stable housing and stayed there longer.

“Before they had to rely on friends to fill out papers, and now they have a new kind of security,” said Marcelo Suárez-Orozco, dean of the graduate school of education at the University of California, Los Angeles, and an author of a national study of undocumented undergraduates.

In the U.C.L.A. study, 86 percent of those with deferrals reported a positive impact on their education because of new access to financial aid or paid internships. More than other students in the country illegally, the study found, those with deferrals had a strong desire for belonging in the United States, with 94 percent saying they would become citizens if they could.

Some Republicans in Congress want to shut down the program completely, saying it is part of a constitutional overreach by the president. Next week lawmakers will have to try to break an impasse over a bill to fund the Department of Homeland Security passed by the Republican-led House, which includes provisions to end all the president’s actions, including the existing program. Democrats blocked the measure in the Senate.

José Santiago, a Mexican student in Homestead, Fla., said the youth program was his ticket out of the hard life of his parents, who are farmworkers in the vast fields around his hometown. After one miserably hot, backbreaking day picking squash, Mr. Santiago realized he needed another line of work.

With his working papers, Mr. Santiago, 19, graduated from high school and went straight to Miami Dade College in Homestead as a full-time student in computer science.

The legal foothold allowed him to win a private scholarship, get a car and start plotting a course to a four-year degree and a computer engineering career — indoors.

Mr. Santiago is part of a group that is helping students who have deferrals to renew them and trying to bolster the sinking spirits of first-time applicants now in limbo.

“I feel protected, at least,” Mr. Santiago said. “But it’s just a work permit. I can’t say I’m more American until I have a way to citizenship.”