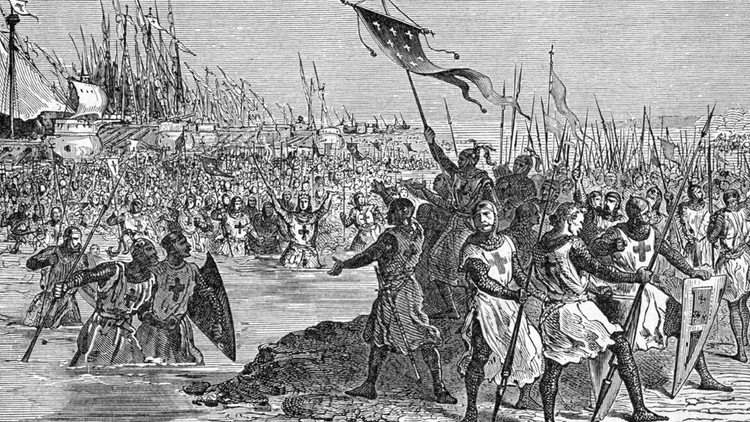 The President really should avoid the National Prayer Breakfast because it is not a good venue for his unique skill set. Rather than adopting an attitude of humble spirituality, his inner lecturer tends to take over, and expresses itself in tiresome tropes of moral equivalency like comparing medieval Christianity with today’s headchoppy arsonist Islam.

His strongest religious belief is apparently that Americans are sinners, both historically and currently, who need to be scolded and punished, as well as replaced by illegal aliens.

Yes, Professor, the Inquisition was evil, and bad things happened during the Crusades, though the goal of defending Christianity’s home from hostile Muslims was quite noble. But appalling atrocities occur today and the President routinely excuses them because of the religion of the killers.

The mention of the Crusades is another bow to jihadists, who commonly refer to Christians as Crusaders, and not in a friendly way. In 1998, Osama bin Laden urged fellow Muslims to join him in jihad against “Jews and Crusaders.”

This is the same Obama who declared to the United Nations assembly in 2012, “The future must not belong to those who slander the prophet of Islam.” 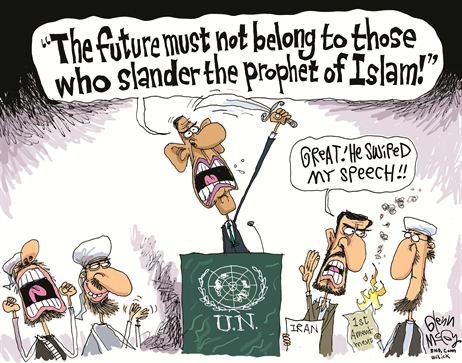 Laura Ingraham appeared on Fox News on Thursday to discuss the Obama shenanigans.

President Obama, at the National Prayer Breakfast this morning, said:

The problem with all such high-horse declarations by Obama is his continual omission of historical context and, in this case, his conflation of the frequent with the rare. The Crusades began in 1095, almost a millennium ago; the Inquisition in 1478, now over 500 years past. When the president says “people committed terrible deeds in the name of Christ,” he should remember that all religions at the time committed terrible deeds that shock the modern sense of morality — given the savage wars between Christendom and Islam, and the religious purifications and civil discord common to all the religious factional strife that played out, violently, in accord with the ethos of the times.

Slavery was outlawed in the U.S. in 1865. Jim Crow ended officially a half-century ago. Indentured servitude, however, continues, almost exclusively among some Islamic groups in the Middle East and Africa. The caste system and ethnic and religious tribalism that institutionalized discrimination and second-class status, quite akin to Jim Crow, persist in places in Africa, Asia, and the Middle East. I doubt today whether a Jew of any nationality would be allowed to immigrate and buy real estate in too many corners of the Islamic Middle East. Outside of the West, women and homosexuals are often treated no differently than in the Seventh Century.

In fact, Christian countries were the first to legally end the age-old human sin of the slave trade, and the first to outlaw slavery’s continuance. The president, is fond of historical sloppiness and moral equivalence (cf. the Cairo Speech). But what is the point of citing sins of 1,000, 500, 150, or 50 years ago, without acknowledging 1) that such pathologies still continue today outside the West, especially in the world of Islam, and 2) that Christianity had a unique role in ending these wrongs?

So the question for the president is, why does such medieval violence persist to a much greater degree among so many Islamic extremists in the present world than among most zealots of other religions? (This is an empirical statement. Cf., for instance, the nature of recent global terror attacks in resources such as the Global Terrorism Database). And why search the distant past for examples of moral equivalence, unless the present does not offer suitable data?

Did Churchill point to the excesses of Oliver Cromwell, or did Daladier to the French Revolution, to remind their contemporaries that National Socialism in Germany was not doing anything differently in the 1930s than had their own countries in the distant past? Those of the 1930s who sought to make such facile comparisons between their own past and Germany’s present were written off as appeasers.

Areas of Central and Latin America are as poor as the Middle East, but Christian liberation theologists, unlike the Islamic State, are not beheading and burning prisoners alive to advance their redistributionist cause. Chinese imperialists and colonialists have absorbed Tibet, but the Dalai Lama is not sending suicide bombers into China. The children of East Prussians expelled from 1945-47 are not suiting up with suicide vests to attack Poles. Impoverished Hindu extremists, angry at centuries of British colonialism, do not hijack planes and ram them into high-rises in British cities. Jews are not blowing up cartoonists and satirists in Paris and Germany who deny or caricature the Holocaust.

No one has easy answers to the dilemma of contemporary violent Islamism; for brief interludes in the recent past, secular ideologies were more likely than radical Islam to be the expressed popular driving forces in the violent Middle East (e.g., fascism [1930s], Communism [1940s], Baathism and Pan-Arabism [1950s], which produced the Grand Mufti, Nasser, the Assads, Arafat, Saddam, and Qaddafi). The president and his advisers should be investigating why radical Islam is currently terrorizing the globe, rather than denying it entirely, hiding it by euphemisms, or excusing it by citing morally equivalent examples from the past.