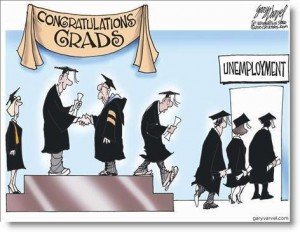 Rutgers Professor Hal Salzman was a standout witness in Tuesdays Senate hearing because of his grasp of the facts and skill at explaining the danger to citizens employment from bad policies.

Senator Sessions questioned the professor on the subject of legislation:

SESSIONS: In an article that appeared in US News and World Report you wrote, Guest workers currently make up two-thirds of all new IT hires. . . .

What would happen if the guest worker green card provisions in the Gang of Eight bill or the Skills Act or the I-Squared became law? How would it change things?

SALZMAN: It would dramatically increase the number and we find based on those estimates that would provide enough guest workers to fill 100 percent of the jobs with perhaps 50 percent left in reserve that could then be used to backfill and replace current workers. So the current bills supply more than even what the industry says it needs to fill every new job.

SESSIONS: And youve written that universities graduate twice as many people with STEM degrees (science, technology, engineering, mathematics) each year as there are job openings in this field. Would you comment on that?

SALZMAN: Yes, I mean overall our universities are very good at providing the work force thats needed. Current numbers suggest half to two-thirds of graduates find a job in a STEM field. And whats important to also notice is when we do observe a shortage, as happened in the petroleum industry, you see wages go up. And when wages have gone up, student enrollments increased dramatically. In other words, students are very sensitive to the market signals about where there is demand, where wages go up and they respond, which brings up the curious question which is if there is demand out there, why havent we seen wages increase?

Witness Ron Hira also noted in the clip that the state of California has hired foreign workers to process unemployment insurance system.

Speaking of the formerly Golden State, Ive been reporting for a while that California universities have been admitting more foreign students because they pay full tuition, and the state needs the money. But the following item came up in the hearing and is rather shocking when you think about it:

SALZMAN: And, along the way, [increased STEM visas] will erode the nation’s innovation foundation anchored in American universities as they close their doors to U.S. students, just as the California State University system did when it decreed that its graduate programs were closed to state residents and, to increase revenue, effectively favored admissions to foreign students who now comprise over 90 percent of some STEM masters programs.

Get that? The state universities graduate programs are closed to state residents because foreigners pay more money, even though California parents have been supporting the system with tax dollars for years. How screwed up is that?

In addition, Senator Sessions posted a summary of the hearing:

“The day is over when high-paid immigration lobbyists can simply demand as much labor as they want at the lowest possible price.”

WASHINGTON—U.S. Sen. Jeff Sessions (R-AL), Chairman of the Subcommittee on Immigration and the National Interest, issued the following statement today after the Judiciary Committee held a hearing on the displacement of U.S. workers through the H-1B and related guest worker programs:

“In 2013, columnist Byron York called attention to a curious and alarming fact: the same companies lobbying for more guest workers were laying off American workers in droves.

Today’s hearing called by Chairman Grassley leaves no doubt as to what is happening: large corporations are using foreign worker programs explicitly for the purpose of replacing American workers at lower wages. This is exactly what happened to hundreds of loyal workers, mothers and fathers employed by Southern California Edison.

I would like to thank Chairman Grassley for holding this important hearing, and for his leadership. I would also thank to thank two of our independent witnesses today, Professors Ron Hira and Hal Salzman, recognized as the top experts in their field. In written and oral testimony before the Senate, they and their colleagues have established these facts beyond doubt:

The day is over when high-paid immigration lobbyists can simply demand as much labor as they want at the lowest possible price. By a nearly 10-1 margin, Americans of all backgrounds say companies should raise wages and improve working conditions before bringing in more labor from abroad. Wages are down, record numbers aren’t working, and welfare is at all-time highs—it’s long past time to get people living here today back to work. The national interest, not the special interests, must guide our immigration policy.”