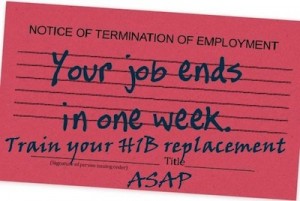 The fraud-friendly H-1b employment visa has been a problem for years and shows how little the government cares about protecting hard-working Americans who spent years and plenty of money acquiring skills in STEM (Science, Technology, Engineering, Math). Nevertheless, Republican Senators Hatch, Flake and Rubio are sponsoring an expansion of tech visas.

The egregious layoff of 400 tech workers from a state utility came up during the hearing and was reported here in February: California: Hundreds of American IT Workers Are Replaced by Foreigners using H-1b Visas.

Senator Grassley is the Chair of the committee (read his Opening Statement), but he left for a vote after a while and didn’t return, leaving Senator Sessions to run the hearing. His Youtube channel posted several videos of interest.

Here is a clip of Senator Sessions, which is titled after his remark, ‘We Have No Obligation To Yield The Lust Of Big Business’ For Low-Paid Guest Workers.

Jay Palmer was the one regular American given the opportunity to speak among the experts. He told his story of being an unemployed tech worker because of his whistleblower activities in a visa fraud case. [Testimony]

Howard University Professor Ron Hira discussed the myth of the H-1b program which supposedly protects American workers against being displaced by cheaper foreigners, but instead has created a “lucrative business model” of replacement employees. [Testimony]

Breitbart covered the hearing in detail.

At Tuesday’s Senate Judiciary Committee hearing on H-1B guest-worker visas, one of the country’s leading experts on the high-tech guest-worker program said that with proposed legislation like the Senate’s “I-Squared” bill that would triple the number of guest-worker visas, Congress’s message to any American worker making more than $60,000 year is: “your job is up for grabs.”

Howard University Public Policy Professor Ron Hira made those remarks after referencing the $60,000 wage floor for H-1B workers and saying that it was a myth that companies pay guest-workers prevailing wages and actively look first for Americans to fill jobs that are eventually given to H-1B guest-workers who are no better qualified or specialized than the American workers they are replacing.

Rutgers University Public Policy Professor Hal Salzman mentioned that the Senate’s “I-Squared” bill would allow 180,000 H-1b visas a year even though industry lobbyists said the tech industry needed 120,000. What that means, according to Salzman, is that it would proved the industry “enough guest-workers with 50% left in reserve,” which would allow the tech industry to essentially fill all new job openings with guest-workers with enough visas leftover to replace more American workers.

“In sum, current policies and the proposed changes in high skill guest-worker visas and immigration policies that increase the supply of guest-workers are likely to accelerate the already deteriorating labor force conditions and career prospects for STEM graduates and workers,” he testified.

Hira said that Southern California Edison’s abuse of the H-1B program “is flagrant but isn’t an isolated case.” He mentioned documented cases of Disney in Florida, Cargill in Minnesota, Harley Davidson in Wisconsin, Pfizer in Connecticut, and Xerox in Rochester all having gamed the H-1B program to displace American workers.

Jay Palmer, the Infosys whistleblower who eventually lost his job for exposing the company’s H-1B abuses, told lawmakers that he wanted to be the face of the displaced American worker and explained to Senators that Infosys brought in guest-workers who were not better qualified than the Americans who trained them before being replaced.

“I’m here today to talk a little bit about who can’t be here today and talk,” Palmer movingly said. “I am the displaced American worker who can’t speak out due to being harassed, blackballed or possibly sued… the one who was forced to sign a non-disparaging remarks agreement in order get a severance package.”

He added that, “I’m the employee that my company chose not to invest in in order to replace me with cheaper labor, cheaper labor that I had to train, train to do my job that I learned over the past 15 or 20 years. They call it knowledge transfer but we all know that’s all an illusion — it’s all about cheaper labor.”

“Their skills were just not there,” he said. “That’s not specialized talent. That’s not the spirit of the H-1B program.”

Palmer mentioned that displaced workers do not want to suffer his fate and are all afraid to speak the truth. Since employers know that it is nearly impossible to prove that they are gaming the system without whistleblowers, most displaced workers must sign non-disparagement agreements. He also said that government agents know the abuses in the system, and their agencies do not want them to tell the truth to Senators.

“They can’t even talk about it — that’s why they are not even here today,” he said.

In addition, as Palmer noted, those who do speak out are subsequently blackballed by the industry. Palmer noted that since he has spoken out about the industry’s H-1B abuses, “nobody will touch me.”

Sen. Jeff Sessions (R-AL) said Congress represents the American people and has no obligation to “yield to the lust of big businesses” who just want cheaper labor. He said Americans are “right and just” in asking that companies give preferences to Americans and legal immigrants already in the country in their hiring practices.