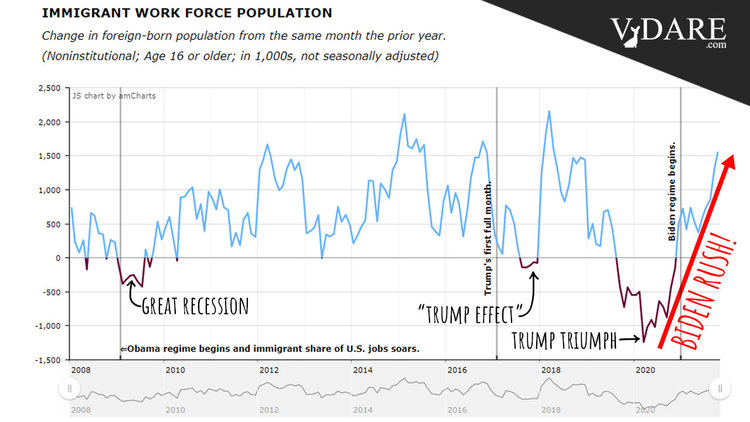 "America is getting back to work. Our economy is starting to work for more Americans," Joe Biden claimed after the October jobs data showed payrolls surging by 531,000 in October, their biggest jump since July [Biden says his plans are working after October jobs report beats expectations, by Kate Sullivan, CNN, November 5, 2021].

What he didn’t say (and probably didn’t know, given endemic Ruling Class ignorance of the immigration dimension): foreign-born workers—not “Americans”—garnered all the October job gains.

Although payrolls have grown every month so far in 2021, they are still more than 4 million short of pre-pandemic levels. And while the “other” employment survey, of households rather than businesses, also reported robust job growth—a total gain of 359,000—our analysis indicates that immigrants (legal and illegal, the data does not distinguish) took all October’s employment increase:

This means that the New VDARE American Worker Displacement Index  (NVDAWDI), our name for the ratio of immigrant to native-born employment growth indexes since January 2009, rose to 119.3 in October from 117.4 the prior month, a 1.63% increase.

American Worker Displacement, as measured by NVDAWDI, was considerably higher in October (119.3) than it was when Donald Trump was inaugurated in January 2017 (114.8) After wild gyrations during his Administration, it finally fell, partly because of the pandemic and partly because of his Executive Actions. In the months immediately after Biden’s inauguration it stabilized, but with the waning of the pandemic, immigrant workers are coming back to work. October could be a harbinger of many grim months for native-born American workers.

A resumption of the relentless increases of the Obama years is highly likely—unless the political climate changes again. No sign of that yet. On the contrary, despite 1.224 million immigrants reported as unemployed in the October 2021 jobs report, the foreign-born working-age population expanded at a pandemic record 1.558 million, Year-over-Year, that month:

Note carefully what this chart shows. Unlike our other charts, which show absolute values, this one compares each month to the same month of the prior year. So the immigrant workforce population grew by 1.558 million in October 2021 compared to October 2020. The corresponding increases for August and September were 849,000 and 1.301 million, respectively.

For most of 2020, the population of working-age immigrants declined Y-O-Y. This far exceeded the net exodus during the 2008 Great Recession, and the brief net exodus during Trump’s first year, when his mere presence seems to have jawboned illegals into fleeing.

The immigrant Work Force population started growing again only in December 2020—when Biden’s election spurred a renewed invasion. It is now starting to displace American workers.

A few days before the October jobs report was released, Federal Reserve Chairman Jerome Powell said: "There is still ground to cover to reach maximum employment both in terms of employment and in terms of participation." He added that it was "within the realm of possibility" that the economy can achieve maximum employment by the second half of next year, as measured by a broad range of metrics [Inflation is at a 30-year high. Here's how the Federal Reserve plans to deal with it, NPR, November 3, 2021].

Those questions do not interest Powell. He is not an elected official. But so far in this election cycle, no prominent politician has addressed these questions either.