Back down the Memory Hole—none of the Main Stream Media reports of the July job numbers released Friday factored in immigrant displacement of American workers, although the phenomenon caused a brief MSM sensation in June. President Obama was able to boast at his press conference about job growth without fear that anyone would point out that essentially all new jobs since 2000 have gone to immigrants. At VDARE.com, we’ve been patiently reporting displacement every month since 2004. This month’s news: it’s back in full force.

The July job growth figure—209,000—was tepid compared to the (revised) 298,000 reported in June. Of course, Wall Street likes a slowing job market, because it suggests the Fed will not withdraw its monetary medicine anytime soon, the stock market bubble will continue to inflate, making the rich richer and…well, you know. But the “other” job survey, based upon households rather than businesses, suggests that Main Street is already in a funk.

The Household Survey reports a sub-par 131,000 jobs were created last month, pushing unemployment (which is based on the Household Survey) up to 6.2%. To put this in context, remember that as many as 90,000 new jobs per month are needed to absorb the ongoing influx of one million or so immigrants allowed to enter each year. And that’s just the legal immigrants.

Our analysis of the Household data finds that foreign-born workers—legal and illegal—gained jobs at twice the rate of native-born Americans last month:

July’s job picture marked a resumption of the displacement of native-born American workers by immigrants that has been a fact of life during the Obama years. The trend is made clear in our New VDARE.com American Worker Displacement Index (NVDAWDI) graphic: 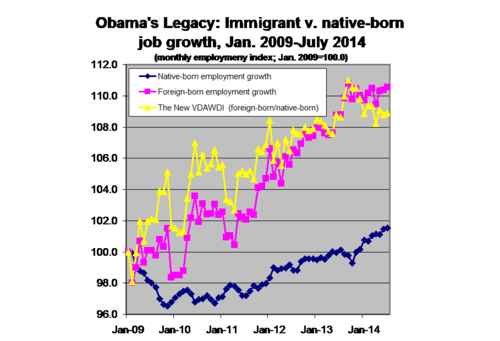 By focusing only on the Obama years we are actually understating the impact of mass immigration on native-born American workers. The Great Recession was a disaster for immigrants and native-born Americans alike. Many immigrants apparently left the country after 2008. Fewer entered. Displacement was far more pernicious when economic growth was (relatively) robust during the George W. Bushyears, 2000 to 2008.

Though native-born Americans employment is somewhat higher now than it was at the start of the Great Recession, there are still fewer working-age natives holding a job in the first quarter of 2014 than in 2000, while the number of immigrants with a job is 5.7 million above the 2000 level.

The tendency for a strengthening economy to benefit foreign-born more than native-born American job seekers is evident in the “Employment Status by Nativity” table published in the July employment report:

Over the past 12 months:

As things stand now, U.S. job growth will simply suck in more legal and illegal immigration to this country.

This is not an inevitable outcome, however. A sealed southern border and a sane policy on legal immigration can help shrink the army of unemployed American.

Or to put in another way: The Atlantic Magazine tweeted this graph, which, when you click through, includes a picture of President Obama.

2014 has been the best year for jobs growth by far since the crash http://t.co/GbBhiifdmn pic.twitter.com/xFFRQ78mCC

Should Americans be saying “Thank you, President Obama?” No, they shouldn’t. The people who got the jobs—largely Hispanic immigrants—should be saying “Gracias, Senor Presidente!”