The economy added a lackluster 217,000 jobs in May, about in line with what economists had expected. The unemployment rate remained at 6.3%.

Yet the MSM teased out a number of Happy Days Are Here Again factoids:

Reality check: As many as 90,000 of those jobs are needed just to absorb the new legal immigrants arriving each month. When you consider that 8 million native-born American workers were unemployed in May, and millions more have left the labor force entirely, 200,000 per month is, in fact, shockingly low. Reality check: Not since the Great Depression has it taken so long to recover all the jobs lost during a downturn.

But back then, immigration and native-born population growth was at a standstill. Stagnant population growth ameliorated the impact of stagnant job growth. By contrast, U.S. population has grown by about 12.5 million since 2008—most of it due to new immigrants and their U.S.-born children.

For perspective we analyze the “other” employment survey, of households rather than business establishments. The Household Employment Survey reports total U.S. employment at 145.814 million in May, or more than 7 million above the Establishment Survey’s total. As VDARE.com has uniquely pointed out, this discrepancy reflects, in part, the reluctance of employers to acknowledge the existence of illegal aliens on their payrolls.

Only 145,000 jobs were created in May, according to the Household Survey. The Household survey now breaks out the employment of immigrants, legal and illegal. Our analysis of the data finds that all of this May job gain accrued to immigrants:

Thus May marked the resumption of native-born American worker displacement, a trend which had been in hiatus during the horrific winter of 2014.

The displacement of native-born American workers by immigrants has been a central fact of economic life during most of the Obama era. This is evident in our New VDARE.com American Worker Displacement Index (NVDAWDI) graphic: 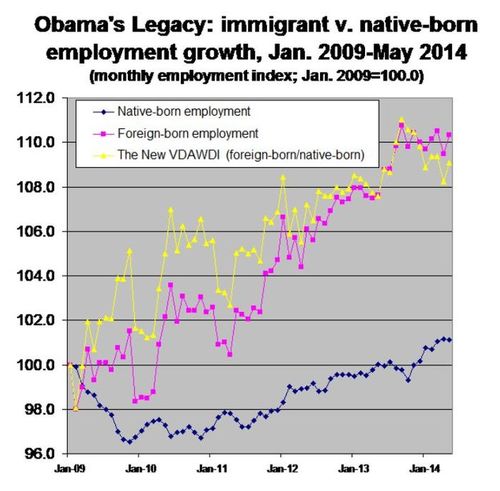 A more detailed picture of American worker displacement over the past year, May 2013 to May 2014, is seen in Household Survey data published in the monthly job report:

Over the past 12 months:

Overarching everything is the burgeoning gap in working-age population growth. Over the past year the number of foreign-born aged 16 and over rose by 3.0%. The corresponding rate for native-born Americans: 0.5%.

If these differentials persist, the number of working-age immigrants will double in only 24 years. It will take 144 years for native-born workers to match that.