Suddenly, in the usual mysterious way, the fact that immigrants have been displacing American in the job market has finally surfaced in the Main Stream Media—See “Shock Study”–CIS, DRUDGE, And NRO Repeat What VDARE.com Has Been Saying For Years. Paradoxically, June’s data shows this phenomenon making one of its periodic pauses, although the major trend, of course, is still intact.

Employers added 288,000 jobs in June, well above the average recorded in the first five months of 2014, and another sign that growth may be at last rebounding. The Labor Department also reported that the unemployment rate fell by 0.2 percentage points, to 6.1%, the lowest reading since things started to unravel in September 2008.

Even less widely reported: The labor force participation rate for immigrants (62.0% in June) was significantly above that of native-born Americans (58.0 %.) Higher participation usually brings higher unemployment rates because more people are looking for jobs. The low unemployment/high participation slant of immigrant labor is a boon to those already here—and a magnet for future foreign-born job seekers.

A whopping 407,000 jobs were created in June according to the Household Survey. Our analysis of the data finds that native-born American workers gained jobs at a faster pace than immigrants:

But June was an anomaly—a break from displacement of native-born American workers by immigrants that has been a notable feature the Obama years. The long-term trend is still intact, as shown by our New VDARE.com American Worker Displacement Index (NVDAWDI) graphic: 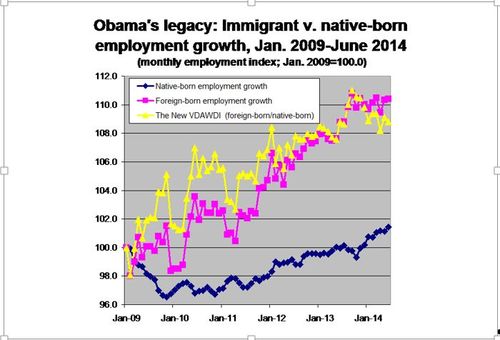 By focusing only on the Obama years we are actually understating the impact of mass immigration on native-born American workers. The Great Recession was a disaster for immigrants and native-born Americans alike. Many immigrants apparently left the country after 2008. Fewer entered. Displacement was far more pernicious when economic growth was (relatively) robust during the George W. Bush years, 2000 to 2008.

The economy may indeed be getting better. But if recent history is a guide, the beneficiaries will be overwhelmingly foreign-born—above all if anything like the Rubio-Schumer Amnesty/ Immigration Surge legislation is passed.