It’s nice to see somebody is paying attention to the devastating effect smart machines are having on American jobs, because our elected representatives in Washington certainly aren’t.

Jeff Greene, a wealthy investor, is concerned that white-collar jobs are about to go the way of blue-collar employment in five to 10 years — that’s soon!

The Wall Street Journal reported in May that advanced financial software has eliminated many office jobs:

Automation is threatening to replace swaths of white-collar workers, much as mechanical robots have displaced blue-collar workers on assembly lines. Among those in jeopardy: accounts-payable clerks; inventory-control analysts, who record and audit what is in stock and estimate inventory needs; and accounts-receivable clerks, who send invoices to customers, track payments, and forecast customer default rates.

These white-collar job losses are harder to notice. There’s no physical robot to see welding a car together, just a better software program to speed tasks through a computer. But the unemployment result is the same. Tech workers face the same pink slips as coding becomes automated. 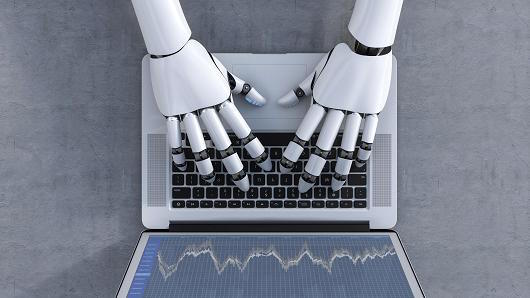 One consequence is the very reduced need for skilled H-1b immigrant workers, if any are required at all.

Certainly the automation revolution now going on in the workplace needs a little attention from the bright lights in Washington. They continue to legislate immigration when none is needed in the job market. Meanwhile, a 2013 study from Oxford University researchers estimated that 45 percent of US jobs were at risk from automation. The Gartner consulting firm has forecast that one-third of jobs will be done by smart machines by 2025.

So one thing that needs to be done is to find the OFF switch for immigration, because we will need all the remaining jobs for citizens.

Here’s an interview with the concerned billionaire, Jeff Greene:

Billionaire investor Jeff Greene is digging into his own pockets to address what he believes is a big issue: robots.

Greene, founder of the Greene Institute, sponsored the Closing the Gap conference last week, hoping that attendees would develop solutions on creating a more inclusive global economy. According to him, a looming threat comes from technology, where he contends automation is becoming increasingly disruptive to both white-collar and blue-collar jobs.

He warned that “what globalization did to the blue-collar worker in manufacturing over 30 or 40 years, artificial intelligence, machine learning, big data, robotics I believe will do to the white-collar workforce in the next five to 10 years,” Greene said. His comments echoed the widening opinions of experts who believe robots and AI pose a serious challenge to middle-class vitality.

“This is a national emergency and I’m going to address it myself if no one else will,” Greene said.

Not everyone agrees. Ken Moelis, CEO of investment bank Moelis & Co., told CNBC that while changes in technology might be disruptive, they aren’t necessarily going to wipe out swaths of the labor force. In fact, he said technology can be fundamentally good for consumers, but less so for some businesses.

“In our world right now you have so much technology driving price transparency, pricing power, efficiency. These are great things,” he told “Closing Bell” last week. However, “if you are a retailer … you better take your profit down and give the consumer an awfully good deal or Amazon is going to replace you.”

“Just look at an Amazon distribution center, the robots are stocking the shelves. Go take a look at the video of a Tesla factory, the welders are robots,” Greene said. “This is really happening. This is not ‘The Jetsons’ anymore. This is happening today.”

Labor experts are of two minds on the robot trend. While job losses are perceived as inevitable — Gartner recently predicted robots would take over a third of all jobs by 2025 — the need for more automation is also expected to create new jobs, other economists say.

A Bank of America Merrill Lynch and University of Oxford report found that up to half of jobs could be replaced in 20 years by robots or computerization, especially low-paying jobs in the retail sector. There’s already evidence of this process happening at some major retailers.

This fall, Best Buy is testing a robot named Chloe to roam the aisles of one of its New York City locations, and check inventory levels there. Another retailer, Orchard Supply Hardware (a chain owned by Lowe’s) is using a robot called OSHbot to help customers at a San Jose, California-area store find items. OSHbot is even bilingual, with Spanish translation abilities.

Yet retailers are moving to reassure the public. In an emailed statement, a Best Buy spokeswoman told CNBC: “Chloe is one test in one of our stores and does not replace any employees. Chloe makes it easy for customers to find products like DVDs and music, so the store’s employees are able to spend more time helping customers with more complex technology needs.”

Lowe’s echoed that sentiment, saying that robots like OSHbot will simply enhance employees’ abilities to serve customers by allowing them to focus on more complex questions.

“Our Lowe’s employees are one of our key competitive advantages, as they have a high degree of home improvement project expertise that customers know and trust,” the company said in an emailed statement. “A robot will never replace this personal relationship.”

Robots and technology stealing jobs has been a concern that has been around for centuries. Yet some observers point out that every time technology resulted in certain jobs being obsolete, the workforce has adapted.

Earlier this year, consulting firm Deloitte produced a report that analyzed 140 years of data. It found that since 1871, technology has created more jobs than it’s destroyed, suggesting that job growth in traditionally white-collar fields has more than offset the loss of jobs in the agricultural and manufacturing sectors.

Greene, however, thinks this time is different. The answer lies in the fact that the U.S. used to have a relatively closed economy whereas now, labor gets replaced either with a tech solution or cheaper foreign-born labor.

According to Greene, one solution to the modern job landscape would be lifelong education. It’s all about “teaching our kids that they may have 20 jobs in their lifetimes and they have to learn how to adapt,” he said.

“I have friends whose kids graduate top law schools and can’t get a job for a year or two. We have to do something about it because the job picture is getting worse and worse,” Greene added.

“Some people, they work in a job, it’s not their fault that that industry gets automated and they lose their job. We have to have a safety net to hold them over until … and then we have to retrain them and give those that want to work a chance to have another job.”