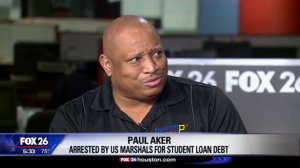 Narrative Collapse: "Houston Man" Arrested For "Not Paying Student Loan" Is Black Scofflaw Who Resisted Arrest And Said He Had A Gun

When I heard stories about Federal Marshals arresting people for unpaid student loans, I didn't really believe it. I assumed it was a case of someone being arrested for ducking a subpoena, which can happen no matter what you're going to court for. It turns out that's actually the case. The picture above is of the guy who was arrested. Oddly, enough, the headline calls him him a "Houston Man": Houston man arrested by seven U.S. Marshals for not paying $1,500 student loan from 1987, BY David Boroff, NEW YORK DAILY NEWS, February 16, 2016

That's normally what is what they call a black man who's murdered, raped, or beaten  someone, but since he's the (alleged) victim of police brutality, shouldn't they call him a "Black Man" or an "African-American"?

Seven U.S. Marshals armed with automatic weapons arrested a Texas man for not paying a $1,500 student loan from three decades ago, he claims.

Paul Aker said he was surprised at his Houston home on Thursday by seven people in combat gear.

"They grabbed me, they threw me down," the 48-year-old Aker told the Daily News on Tuesday. "Local PD is just standing there."

Aker said he didn't receive any notice or warning about the loan, which he received in 1987 at Prairie View A&M University.[Emphasis added]