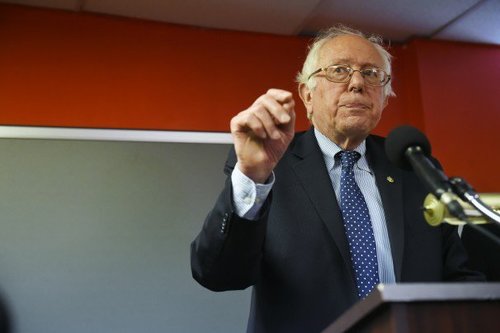 It’s been very important for The Establishment to set the Overton Window on immigration so that the only question is:

Are you pro-immigrant or are you some kind of vicious racist anti-immigrant hater?

But now Bernie Sander has come along with a bunch of arguments about the effects of various immigration policies. These aren’t terribly original arguments. They are about the same as the ones Samuel Gompers used to argue for immigration restriction in the 1920s.

But they are, intellectually, far above the Establishment’s grade schoolish conception of thinking about immigration, which is basically, are you a Good person or a Bad person? Are you on the team of powerful Winners or are you on the Loser team? Are you Punching Down against racist white people with 2-digit IQs whining “They’ll Take Our Jerbs!” alongside other Good puncherd0wners like Mark Zuckerberg, George Soros, the Koch Brothers, Rupert Murdoch, Bill Gates, Michael Bloomberg, John McCain, the Roman Catholic hierarchy, the Business Round Table, and Hillary Clinton? Or are you one of those low brow puncher uppers like Donald Trump and … and … a bunch of aging roofers.

Bernie, however, isn’t sticking to the script for isolating Trump.

Sen. Bernie Sanders (I-Vt.) found himself at odds with some immigration reform advocates Thursday, defending his 2007 vote against a comprehensive immigration bill and telling an audience hosted by the Hispanic Chamber of Commerce that “open borders” were a threat to American jobs.

“There is a reason that Wall Street likes immigration reform,” Sanders said. “What I think they’re interested in is seeing a process by which we can bring low-wage labor into this county.”