The results are in and the Obama Regime Administrative Amnesty has reached its apparent peak with a complete defanging of U.S. Immigration and Customs Enforcement Enforcement and Removal Operations (ICE ERO).  The much and justly maligned ICE Special Victims Unit (ICE SVU), formally known as Homeland Security Investigations (HSI), was long ago happily neutered, but the Obama Regime fight with the patriotic officers of ICE ERO, led by their union President, Chris Crane, was a long and difficult fight, with much rear-guard action being taken, but not for naught, as the coming Trump triumph will re-invigorate ICE ERO.

But back to the bad news: despite huge budget increases, much spent apparently on take-home cars,  deportations, detainers, arrests, encounters, and charging documents are all down. (Which does make one wonder, why do Deportation Officers (DO) and Immigration Enforcement Agents (IEA) need take-home vehicles if they are not out in the field arresting anyone?)

And for the record, both the Center for Immigration Studies (CIS) and the Daily Caller refer to ICE , not, more accurately, to ICE ERO as the problem in the collapse in deportations.  ERO is responsible for all deportations from the United States, and is a component of the larger organization, ICE.

Immigration and Customs Enforcement (ICE) has been the least productive it has been in years according to an analysis released Tuesday of ICE figures.

“By every measure, ICE is doing less and less enforcement. According to the agency’s key metrics – Encounters, Arrests, Detainers, and Charging Documents Issued – fewer aliens have been put on the path to deportation in 2016,” Jessica Vaughn, director of policy studies at the Center for Immigration Studies (CIS), wrote in a recent report.

One of the figures ICE uses to measure their enforcement activity, encounters with illegal aliens, isn’t even being reported anymore by the agency. Arrests by ICE i^s down ten percent from last year, and detainers issued to deport aliens in custody by law enforcement agencies by ICE are down 16 percent from 2015.

[ICE Figures Show Agency Is Less Productive Than It Has Been In Years, by Alex Pfeiffer, Daily Caller, July 19, 2016] 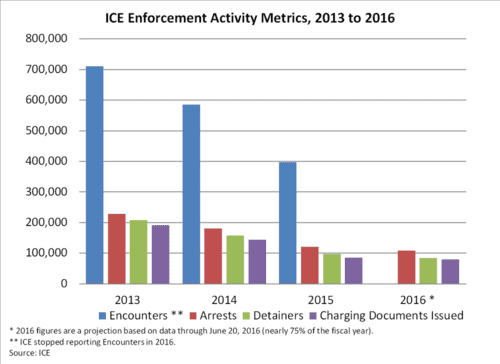 This appears to be the nadir of the Obama Regime Administrative Amnesty.  It can hardly get worse in the last few months, though one can never underestimate the treachery of Barack Hussein Obama, his obsession to destroy the historic American nation, and his open hatred of White Americans.  I expect nothing to radical during the campaign, but in the few months between the election of Donald J. Trump and his inauguration, the lame duck Obama might make even more Amnesty moves.  Nothing, however, that cannot be reversed by Presidential direction after January 2017.  And perhaps criminally  prosecuted,  as Hillary will be.  Trump might be well advised to make that clear after his election: let the bureaucrats know there will be consequences if they follow any illegal orders from Obama.