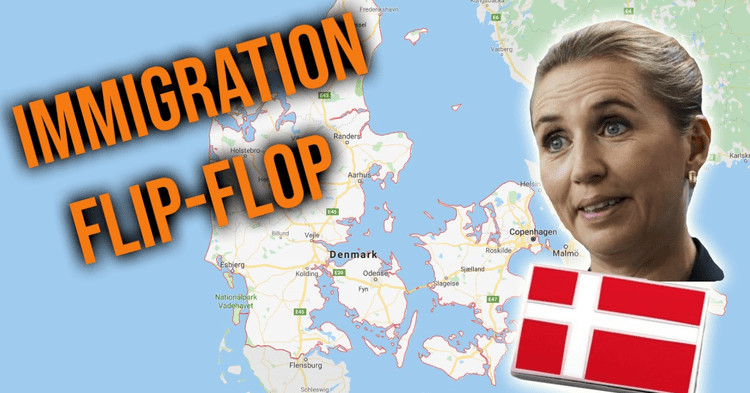 Moral Of Denmark Immigration Disaster: The Left Hates The West

Earlier this year, I wrote “The Price Of Mass Immigration Is Paid By The Lower Classes”—Anti-Immigrant LEFT Wins Danish Election. Why Can’t This Happen In U.S.? (June 7, 2019). But in the three months since the Social Democrats (SDP) took power, led by 41-year-old female Prime Minister Mette Frederiksen, they have gradually revealed their true colors. Of course it’s still good that the SDP pretended to be immigration patriots—hypocrisy is the homage that vice pays to virtue—but the moral is: Put not your trust in Leftists.

Previously, as I noted, the SDP had voted with the coalition led by Venstre (translates as “Left,” but actually center-right conservatives) to ban the burka and niqab, seize jewelry from refugees (on the theory that if someone is receiving welfare, they should not have jewelry worth thousands of dollars), process asylum-seekers outside Europe, and cap non-Western immigration. But in order to form a “Left Bloc” coalition—with Greens and Socialists, who favor Denmark’s wholesale destruction—immigration policies are now officially to be “softened.”

During the election, Frederiksen pledged focus on “repatriation” rather than “integration.” But this has now changed to a desire to “improve conditions for families of rejected asylum-seekers and recommence accepting refugees under the UN’s quota system.” A plan to house asylum-seekers on an uninhabited island in the Baltic Sea has also been revoked [Denmark’s new government softens line on migration, by Emma Wallis, Info Migrants, July 8, 2019]. And the Left Block coalition has also overturned what they now claim is a “silly” law mandating that you had to live in Denmark for nine years before you could claim citizenship [Denmark Removes “Silly” Requirement for Citizenship Forms, The Local, September 27, 2019].

In other words, the Center-Left successfully gulled white working-class voters. (Although perhaps these voters should have been cynical enough to realize that the SDP would inevitably do this, especially in a pure Proportional Representation system where it was very likely that the SDP would end up forming a coalition with the extreme Left.)

To make matters worse, the leading opposition party, Venestre have voted to neuter themselves on the immigration issue. According to its Justice Minister, the previous government, with its hard-line immigration minister Inger Støjberg, seriously considered building a wall on its German border to keep (male Muslim) immigrants out of Denmark, during in the 2015 migration crisis [International Round-Up: Previous government considered building wall on German border, by Roselyne Min, Copenhagen Post, September 16, 2019].

However, this same former immigration minister recently lost her battle to become leader of Venstre, meaning that the party will likely be led in a less hard-line direction. Støjberg has had to make do with the post of deputy-leader [A leader with pedigree: Venstre has a new boss, by Christian W, Copenhagen Post, September 23, 2019].

These unfortunate policy changes come at a time when a whooping cough epidemic has been declared in Denmark [Whooping Cough Epidemic Declared in Denmark, The Local, September 18, 2019], probably due to unvaccinated third world children bringing whooping cough with them. Likewise, tuberculosis has returned to Denmark, with 78% of the cases in 2018 being among Third World immigrants and many of the rest likely being among those of immigrant background who are legally classified as “Danes” [Tuberculosis 2018, Statens Serum Institut, September 20, 2019].

And the immigrant chaos of Sweden is traveling across the border. There have been ten bombings in Denmark since February, connected to Muslim gang warfare. The most recent was on August 27th in ghetto suburb of Copenhagen, though nobody was killed. On August 6th, the Danish tax authority was bombed by “Swedish citizens” who were not ethnic Swedes. In August 10th, a Copenhagen police station was bombed. The Prime Minister told the media: “We have a challenge. It should not be the case that you can travel from Sweden to Denmark and place dynamite in the middle of Copenhagen.” The border, she said, “has our full attention. And it needs to be strengthened” [Will Denmark Become Like Sweden?, by Judith Bergman, Gatestone Institute, September 10, 2019]. But why should Danes believe that their new Prime Minister, beholden to her extreme Left allies, will do anything about it?

Fortunately, the Left Block don’t seem to have any plans to revoke the country’s ghetto laws, which came into effect this year. If children are from what the Danish government regards as an ethnic ghetto, then starting at the age of one, they must be separated from their parents for at least 25 hours per week, not including “nap time,” to be inculcated with “Danish values.” Failure to comply results in welfare payments being stopped. The anti-immigration Danish People’s Party also wanted ghetto legislation to include a law whereby all teenagers living in ghettos had to abide by an 8pm curfew, though this was rejected as “too radical” [NYT Feverish Over Muslims Obliged to Send Kids to Pre-School in Denmark: “Give Us Your Children,” by Clay Waters, NewsBusters, July 3, 2018]. Still, perhaps “softening" these laws will be next on the list.

It’s worth also noting Prime Minister Frederiksen’s pearl-clutching response to President Trump’s suggestion that the U.S. purchase Greenland [Danish PM says Trump's idea of selling Greenland to U.S. is absurd,Reuters, August 18, 2019], with which she stupidly offended the leader of the World Hegemon and caused him to cancel his state visit to Denmark [In Denmark, Bewilderment and Anger Over Trump’s Canceled Visit, By Martin Selsoe Sorensen, NYT, August 21, 2019].

Frederickson dismissed the idea as  “absurd” (although there have in fact been previous discussions of selling Greenland in 1867, 1910, and 1946) and added that “Greenland is not Danish, Greenland belongs to Greenland.” But this beautiful piece of virtue-signalling doesn’t stand up to a moment’s scrutiny. Greenland, an 811,000 square mile island with a population of just 60,000, is completely dependant on a $591 million subsidy paid to its autonomous government by Danish taxpayers every year. This subsidy is 60% of Greenland’s budget and they would be plunged into even worse poverty without it [President Trump Eyes a New Real-Estate Purchase: Greenland, By Vivian Salama et al., WSJ, August 16, 2019].

Greenland has the highest suicide rate in the world, and a huge problem with alcoholism and child sex abuse, with one third of Greenlanders having been sexually abused as children [Greenland seeks to break silence around child sexual abuse, Japan Times, July 26, 2019]. Indeed, Denmark has just given Greenland a further $730,000 to try to deal with its endemic child sex abuse problem [Greenland Calls On Denmark to Help Fight Child Sexual Abuse, by Martin Selsoe Sorensen, New York Times, September 27, 2019].

Why couldn’t Frederickson just joke that Denmark would maybe swap Greenland for Mar-A-Lago? Because she’s a typical knee-jerk Trump-deranged Leftist. (It’s an international phenomenon!) So much the worse for her country.

Hopefully, working class Danish voters have finally learned their lesson—but all First-World voters should learn from this too.

The Left, ultimately, has a death wish for the West. When they say they’ll be tough on immigration, it’s just to get your vote.

Never let them fool you again.