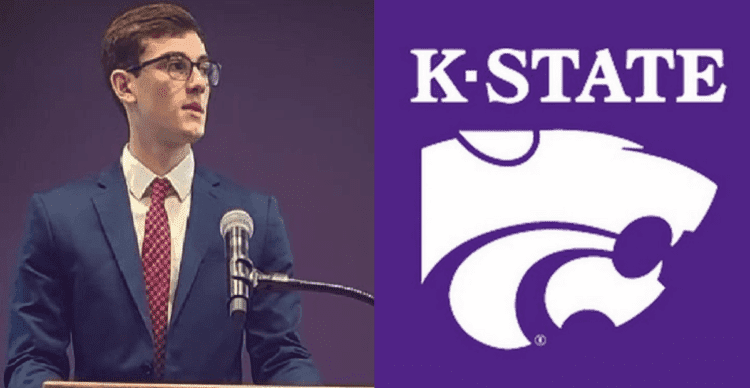 Earlier (2014): What’s the Matter With Kansas?–How Conservatism Inc. Is Blowing It In A Red State

Kansas hasn't voted for a Democrat in presidential elections since 1964. From 1995 to 2002 and from 2011 to 2017, Republicans in Topeka held the iron trifecta of the governor's mansion, the state House and the state Senate. In 2016, Donald Trump walloped Hillary Clinton in this quintessential red state by a 57-36 margin.

So why is it that, in 2020, a mainstream conservative Christian college student under fire by a violence-inciting campus mob can't find a single prominent Republican in the Sunflower State to uphold and defend his free speech rights?

Jaden McNeil is a 21-year-old Kansas State University undergrad, former Turning Point USA chapter leader, and founder of America First Students. Since quitting TPUSA last year over its shocking embrace of drag queens, open borders and a "culture of censorship," McNeil has been attacked by left-wing journalists and tarred through guilt by association. Local reporters such as Judy Thomas at the Kansas City Star have regurgitated baseless lies that McNeil (who I've known since last year and consider a friend and rising conservative star) is connected to "white nationalism" for advocating traditional social conservatism and an end to mass migration.

McNeil also refuses to bend his knee to Black Lives Matter, unlike so many swamp conservatives folding like cheap origami these days. On June 25, the young KSU student tweeted an edgy joke about BLM hero George Floyd:

"Congratulations to George Floyd on being drug free for an entire month!" 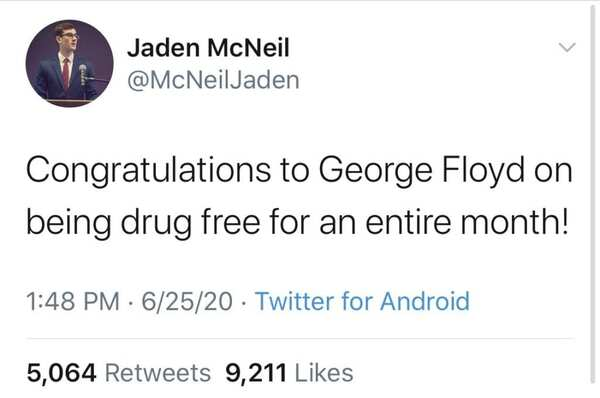 The snarky line is a variation on a common internet commemoration of the deaths of drug-addicted celebrities. You may think it's bad humor or brilliant humor but newsflash: (It's humor. No matter. In end-stage America, where we are now governed by the wokest of the insane and indignant, there is no bigger human rights violation than a George Floyd joke.

A manufactured outrage backlash by KSU College Democrats, athletes and bloodthirsty Black Lives Matter extremists ensued. K-State freshman quarterback Jaren Lewis fulminated: "We are demanding that Kansas State University put a policy in place that allows a student to be dismissed for displaying openly racist, threatening or disrespectful action toward a student or groups of students. We have resolved that we cannot play, practice, or meet until these demands are heard and actions taken." K-State Democrats will hold a march this weekend calling for McNeil's head.

In response, KSU president Richard Myers [Email him] proclaimed that "Black Lives Matter" and immediately pledged "to fast-track action plans to combat racism and bigotry and other forms of social injustice." KSU vice president for student life Thomas Lane [Email him] attacked McNeil for lacking "basic decency." The school has launched an "immediate review" of its "options." The adults in charge poured virtue-signaling fuel on a riotous fire, resulting in an avalanche of violent death threats and doxxing of McNeil's family:

"KICK JADEN MCNEIL OUT OR WE WILL HANDLE HIM OURSELVES. This is not a threat, it's a promise!!" a Twitter user exclaimed. "I swear to God you better never show your face in public in the state of Kansas. F--kin dead man."

Another user named Billy threatened: "I don't know who you are but I hope your (gets) face stomped in. If no one has, I'll do it."

A "parody" Twitter account masquerading as McNeil's mother posted a family photo and his father's employer has been harassed.

"People are more upset about this tweet than they are about George Floyd robbing a pregnant woman at gunpoint," McNeil bluntly noted. Twitter, the supposedly neutral platform, forced McNeil to delete both his original joke and his observation about the selective outrage because, the company claimed, the tweets were "glorifying violence." In the meantime, not a single Kansas Republican has risen to condemn the threats against McNeil, nor defended his rights to free speech and free association. The academic liberty champions of FIRE, however, sent off a letter to KSU President Myers on Monday firmly reminding the school that "the First Amendment bars KSU from punishing or investigating McNeil for his tweets."

"Kansas State may say that it is reviewing its 'options' in response to a demand that a student be kicked out for an unpopular tweet, but it knows those options don't include meeting that demand—at least not legally. The free speech guarantees that some students demand be denied to others are the only thing that protects them from being the next casualty of shifting political winds."

Shibley added: "The many attempts to silence dissenting voices in the past few weeks point to a profound failure among universities nationwide to maintain the climate of free inquiry that gives them purpose. Censorship does nothing to persuade its targets that their views are 'wrong'—only that they must lie about them, or stay silent. While this may result in a temporary political benefit, driving views underground is a ticking time bomb for a democratic society."