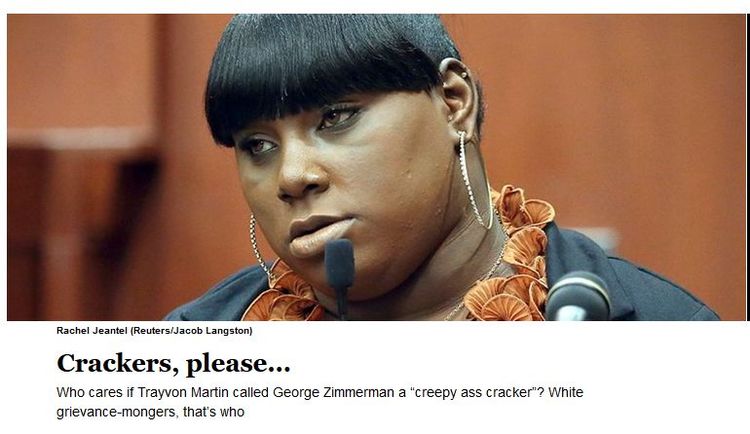 The Fulford File | SALON’s Joan Walsh Thinks That There Is "No Social Order” Where Blacks Oppress Whites. She’s Wrong, Of Course

It came out at the trial that the late Trayvon Martin, before his savage, possibly racially-motivated attack on George Zimmerman, referred to Zimmerman as a “creepy ass cracker”.

Joan Walsh, a Nice White Lady who is “editor at large” at Salon, commented that whites had no business complaining about racial epithets (even if they preceded what in one way or another was actually a hate crime) because

"no social order has ever been devised whereby African-Americans oppress people they deride as 'crackers'."[Crackers, please… | Who cares if Trayvon Martin called George Zimmerman a “creepy ass cracker”? White grievance-mongers, that’s who, June 27, 2013]

James Taranto of the Wall Street Journal sort of agrees with this thesis:

"in the main, true. Today there is systematic discrimination against whites, but to call it "oppression" would be a gross overstatement."['Cracking' the Case | A racial turnabout in the George Zimmerman trial, July 1, 2013]

Taranto points out that there is not, in the United States, systematic discrimination against blacks (illegal for almost 50 years, and monitored by a powerful Federal government) but there is, by law and various Supreme Court and Executive Branch actions, "systematic discrimination against whites". (Taranto occasionally has a rush of common sense to the head on racial issues, but rarely carries it far enough.)

On Twitter, he gets some skepticism from someone called Jonathan Potts, who wonders what harm has been done to whites:

@jamestaranto What would you consider "systematic discrimination against whites?"

Well, I could say more about the social order "whereby African-Americans oppress people they deride as 'crackers', " and Paul Kersey  has said a lot more. But what makes liberals skeptical about anti-white discrimination is that whites aren't failures. That is, they don’t fill the jails, they’re not on welfare that much, they do a lot of the important jobs in society, and they keep passing standardized tests.

In a 2003 column about the defenestration of Trent Lott, removed from his post as Senate Majority Leader for a remark, never mind what, that supposedly offended blacks, Paul Craig Roberts wrote:

In the old feudal system, there were no First Amendment rights. The legally privileged were free to engage in hate speech and to verbally harass others, but any commoner who replied in kind could be sued or have his tongue cut out.

Senate Majority Leader Trent Lott still has his tongue, but just barely. He used his tongue in a way that gave offense to the new aristocrats.

Black Americans have been granted the right to be offended by any words they don't like and to extract retribution. The offending speaker finds himself forced into contrition and humiliating apologies. Often the penalty is a destroyed career.

Wow, "Black Americans" are "the new aristocrats". Quite a remarkable feudal system, that: Aristocrats have a lower standard of living than the "commoners." They have a lower life expectancy. More of them are arrested and imprisoned, per capita, than commoners.

Reading that, I remember thinking that if whites were second-class citizens, they weren’t second-rate citizens. You see, the lower black standard of living is not caused by discrimination, nor is the lower life expectancy, nor is the crime rate.

In 2002, when Paul Craig Roberts wrote that column, Paula Deen had just appeared  on the Oprah Winfrey Show for the first time. (Oprah’s net worth is 2.7 billion dollars.) 16 years before that Paula Deen had been robbed at gunpoint by an African-American named Eugene Thomas King  while she was working at a bank, and referred to him in the aftermath–in a private conversation with her husband–with a Deplorable Word.

Now Paula Deen has lost her job, because that word offended the “new aristocrats”.

However, to answer to Joan Walsh’s idea that "no social order has ever been devised whereby African-Americans oppress people they deride as 'crackers'", this is simply not true.

I can give the following half-dozen examples off the top of my head::

Do you think he agrees with Ms. Walsh that “no social order has ever been devised whereby African-Americans oppress” people like him?

Email Joan Walsh and ask her.