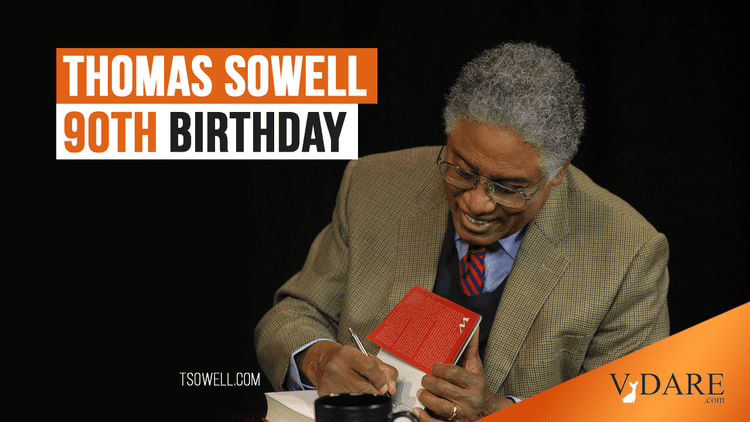 Thomas Sowell turns 90 today. I most sincerely wish him Many Happy Returns. I summarized our relationship when he stopped writing his column in VDARE.com Editor Peter Brimelow: My Role In Thomas Sowell's Brilliant Career; below we list more of my own and VDARE.com’s coverage of him.

Sowell is also mentioned in my Time To Rethink Immigration,  first published in National Review, June 22, 1992; and in  For Whom the Bell Tolls, my October 24, 1994 Forbes Magazine article on The Bell Curve (originally slated to be a cover story but Steve Forbes wimped out).

And this is the epigraph to the "Immigration Has Consequences: Cultural, Social, Environmental..." chapter of my 1995 book Alien Nation: Common Sense About America's Immigration Disaster (still available in Kindle!):

Human differences are often assumed away in social theories...But this fashionable view of society ignores the fact that groups may carry their own messages with them from country to country — a very different message from those who live cheek-by-jowl with them in the same society and sit next to them in the same school rooms or on the same factory assembly line.

The Economics and Politics of Race: An International Perspective