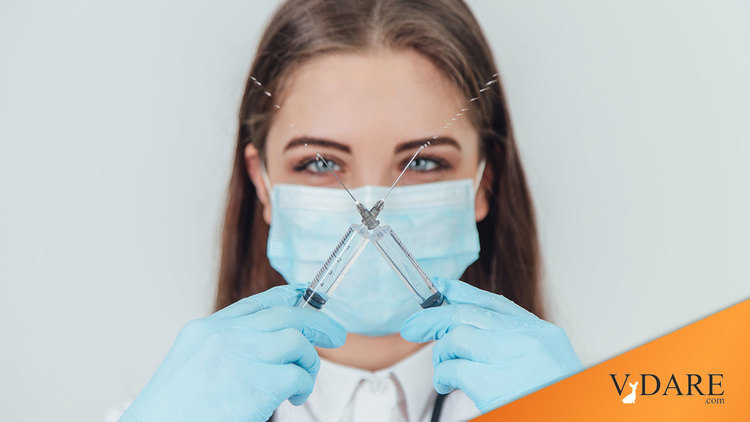 Why on earth should we vaccinate our newborn baby against Hepatitis B—a virus that is contracted mostly through intravenous drug use and sexual contact? That is the question my husband and I had for the doctors and nurses at the hospital where our son was born two and a half months ago.

We didn't get very good answers. It was "convenient," "recommended," and "routine," the medical staff assured us. We wanted more information. A nurse gave us a brochure which explained that babies whose mothers had the Hep B virus were at high risk of developing acute Hep B infections. Well, I tested negative for Hep B. The Centers for Disease Control named unprotected sex, IV drug use, and being stuck with a needle on the job as the likeliest routes of Hep B transmission. Well, my husband and I both work primarily from home, our two children stay at home, and neither we nor our 3-year old daughter nor our baby (for heaven's sake!) live the Kid Rock-and-Pamela Anderson Lee lifestyle.

When we told the hospital staff that we simply wanted more time to think about giving the Hep B shot to our son—doesn't "informed consent" mean we should be truly informed?— we were badgered aggressively. Some lectured us about the need to "get on the proper vaccination schedule." Others warned that Maryland, like more than 40 other states, requires all schoolchildren to be vaccinated for Hep B. Teachers, however, are not subject to the mandate, which is driven not just by altruistic concern for children's health, but as Ohio legislator Dale Van Vyven, who snuck a Hep B mandate into a hazardous-waste bill five years ago admitted, by profit-maximizing vaccine manufacturers' lobbyists.

The "everybody does it" and "for the greater good" arguments worked when we were overcautious, over-trusting, first-time parents who submitted our daughter to every single vaccine without question.  This time, we resolved not to be rushed or bullied. We declined to give our son the politically correct Hep B shot, decided to do more research, and then took up the issue with our pediatrician.

Boy, were we in for a rude awakening. Our doctor parroted the American Academy of Pediatrics line and mindlessly emphasized the efficacy of vaccines in eradicating childhood diseases. Well, we weren't questioning their collective efficacy. We questioned what the individual health benefits and health risks to our newborn were. Physicians have blindly plied vaccines before that have done more harm than good.  A childhood rotavirus vaccine, for example, was approved for widespread use in 1998 and withdrawn from the market less than a year later after causing an increase in the incidence of painful bowel obstruction among infants.

Our doctor, however, pooh-poohed our inquiries about potential side effects. He seemed to have no idea what those risks were and no interest in finding out. He was also incredibly condescending: "95 percent of what you read on the Internet" is unreliable he sermonized, as if we were too dumb to separate scientific fact from fraud.

In the end, we concluded that some of the vaccines were more worth the risks than others. At my son's two-month check-up, the pediatrician expected him to receive a triple-combination shot called "Pediarix" (consisting of Hep B, inactivated polio, and DTaP, which covers diphtheria, tetanus, and acellular pertussis), as well as HiB (for certain bacterial infections) and Prevnar (for meningitis and blood infections). I reiterated my refusal of Hep B, accepted DTaP and HiB, and asked to put off polio and Prevnar. In response, I received a threat: Get all the vaccines or get out of our practice.

We're leaving for another practice, a little bitter but wiser. The strong-arm tactics of the medical establishment mustn't intimidate parents from challenging the universal vaccine orthodoxy. When it comes to protecting our children's health, skepticism is the best medicine.