BIRTH OF A RADICAL

STEVE BANNON, WHO is no stranger to controversy, faced a torrent of reproval when it was revealed not long ago that he had praised a detestable novel envisioning France invaded by an armada of brown-skinned migrants from India. The French novel is called “The Camp of the Saints,” and Bannon recommended it on several occasions when he was executive chairman of Breitbart News, to justify what he perceived as a mortal threat that whites face from immigration. 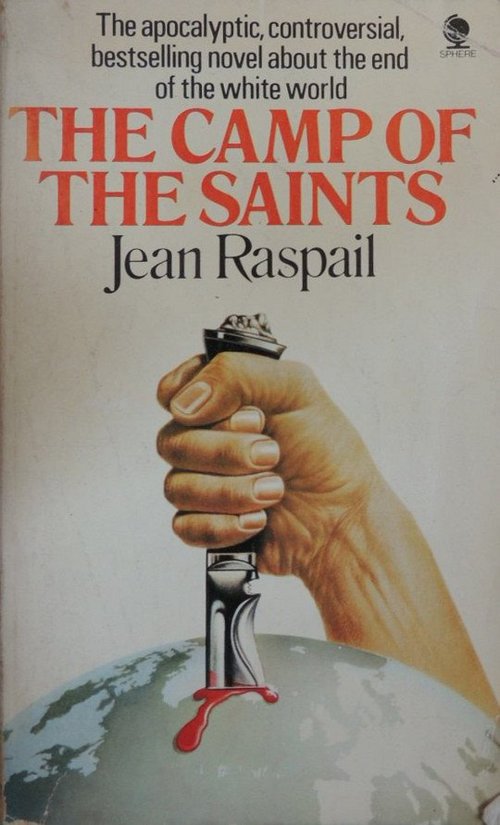 The book, published in the 1970s, had existed for decades as an obscure cornerstone of the utmost fringes of white racism. The Indian children in the novel were referred to as “little monsters,” and the adults were described as sexual maniacs who filled their ships with “rivers of sperm, streaming over bodies, oozing between breasts, and buttocks, and thighs, and lips, and fingers.” The novel ended with hundreds of thousands of them taking over France and, by extension, the West. When it came out in the United States, Kirkus Reviews noted that “the publishers are presenting ‘The Camp of the Saints’ as a major event, and it probably is, in much the same sense that Mein Kampf was a major event.”

Bannon, now a senior adviser to President Donald Trump, made his glowing comments during radio programs he hosted in 2015 and 2016. But his comments were brief and in passing. The most enthusiastic endorsement of the book from anyone at Breitbart, and certainly the longest endorsement, came from a young reporter who wrote a gushing 4,000-word article that said “all around the world, events seem to be lining up with the predictions of the book.” The article, which neglected to mention that “The Camp of the Saints” is widely regarded as utterly racist, merely described it as controversial, and made conspiratorial parallels between its fictional characters and Pope Francis, Marco Rubio, and even Glenn Beck.

The Breitbart reporter was Julia Hahn, a Bannon protégé who followed him into the White House as a special assistant to President Trump. … But Hahn has gotten almost no notice for writing what appears to be the longest and most laudatory article about “The Camp of the Saints” that has appeared in the American media in recent years.

‘Camp of The Saints’ Seen Mirrored In Pope’s Message

Pope Francis is urging America to throw open her borders to thousands of impoverished migrants, in part to atone for the “sins” of the colonial era.

Back to The Intercept:

At a glance, Hahn is an outlier among outliers. She was raised in Beverly Hills, attended a private high school … She majored in philosophy at the University of Chicago, and the sole public trace of her time there is a video of a panel discussion in which she discussed Michael Foucault’s idea that psychoanalysis stigmatizes human sexuality.

Not long after she was appointed to the White House at the age of just 25, one of her college friends reacted by writing on Facebook, “It’s weird because she was always very nice and it’s disappointing when seemingly nice people turn out to be Nazis/Nazi-adjacent.” Another friend asked, “WTF happened???”

The question of what happened offers an opportunity of sorts. There has been a lot of discussion about countering extremism and identifying extremists before they do something that harms themselves or the nation. How do young people become radicalized? The preferred means for answering these questions are not mysterious — find out the ideas that young people are exposed to, find out the social environment they are raised in, and work from there. This framework has been applied mostly to Islamic extremism, with the goal of figuring out why some Muslims become terrorists.

But the tools of “countering violent extremism,” as it’s known, work extremely well for figuring out the riddle of rich white kids who turn to the fringes of the right. … One of the first things you would seek to do, in the effort to understand the creation of this extremist, is to investigate the place where she was raised. It turned out that I didn’t need to search far, because I grew up less than a mile from Hahn’s home, and attended the same high school.

IN A WAY, Julia Hahn is the Patty Hearst of the far right, a daughter of privilege who veered wildly off the expected course. While she has said almost nothing about her journey to the virulent corners of white nationalism, and has not granted any interviews since starting in the White House (she turned down a request from The Intercept), the puzzle of her journey to the alt right can be assembled.

… The private school she attended (as I did, a generation earlier) is Harvard-Westlake. It’s hard to imagine a class of people who benefit more from immigrant and undocumented workers — who clean their homes, mow their lawns, maintain their pools, and cook their meals — than Hahn and other children of privilege in Los Angeles. The comfortable life she enjoyed was due, in no small part, to the immigrants she demeaned as a writer for Breitbart.

The concept that America’s 21st Century rich ought to feel a sense of noblesse oblige toward their less privileged fellow American citizens simply doesn’t register in the conventional wisdom. Fellow American citizens would charge the residents of Beverly Hills more for servant duties than illegal aliens would, so screw them, those racists.

The dissonance appears to widen when you look at her secondary education. Harvard-Westlake is a model of West Coast liberalism. It is generally regarded as the most competitive school in Los Angeles, its student body drawing on the city’s entertainment and business worlds. … But the school has another alum who is more infamous than famous: Alex Marlow, the editor-in-chief of Breitbart.

Marlow graduated from Harvard-Westlake in 2004, before Hahn, and for a long time nobody at the school seemed to know or care where he had ended up. The school took notice in 2016, when Marlow was quoted in a New York Times profile of Bannon. A school official posted the story on Facebook. Parents and alumni of Harvard-Westlake were aghast. “This is an embarrassment to our school, and to our fantastic community,” read one of the comments on the post.

The controversy was duly reported by the school’s student newspaper, which published a story on Marlow and quoted some of his teachers who remembered him as a smart and polite student — just like Hahn. “I would never have imagined that he would get involved with an organization as deplorable as Breitbart News,” said his history teacher Dave Waterhouse.

The upshot is that a single school in Los Angeles was the breeding ground for two of the youngest and most vehement stars of the Trump movement. This raises the prospect of what is known, among experts who study extremism, as a cluster. It goes beyond Hahn and Marlow.

Andrew Breitbart, who founded the site that bears his name, was raised in Brentwood, at the center of the west side, and was living there when he died in 2012. Bannon, before becoming famous as the chairman of Breitbart and then Trump’s ideologue, was a Hollywood producer who sent his daughters to a private school in Brentwood. Stephen Miller, the 31-year-old presidential adviser who has been wildly provocative on immigration issues, was raised in neighboring Santa Monica, also known as the People’s Republic of Santa Monica because of its liberal politics.

This might seem weird. …But look again. While Trump got far fewer votes than Clinton, California’s population is so large that the only other state where Trump got more votes was Texas (which he won). According to a report from the Southern Poverty Law Center, California has more far-right conspiratorial “Patriot” groups, 81, than any other state in the country (Texas, the runner-up, has 79). California may be the “Left Coast,” but it is also the beating heart of the far-right coast. …

IN THE POPULAR telling, a common scenario of Muslim extremism occurs when a susceptible mind falls under the spell of a charismatic leader at a mosque or madrassa, though sometimes the contact occurs online (this happened with followers of Anwar al-Awlaki, for instance). …

This scenario isn’t true only for Islamic extremists.

The sheer existence of dissident wreckers like Hahn inspires goodthinkers feelings of revulsion and paranoia. Perhaps the subversive population of Harvard-Westlake isn’t under 1%, it could be 2%. Or, God forbid, 5%. We need some show trials to expose the saboteurs.