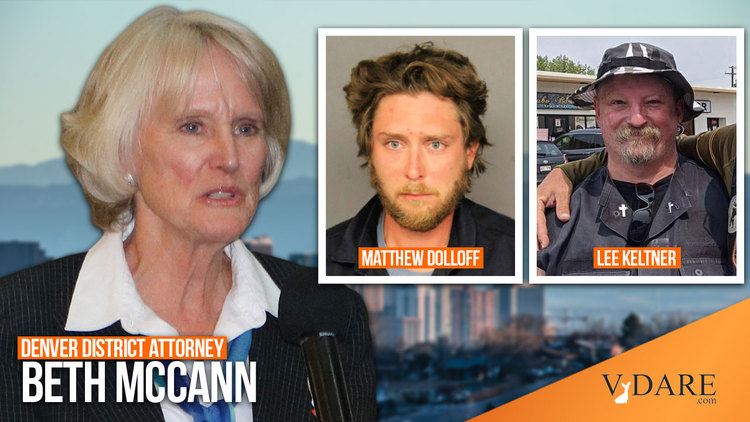 Earlier by Michelle Malkin (November 2020) : A Media-Political Assassination in Denver

Self-described "Progressive Prosecutor" Beth McCann, the district attorney of Denver, campaigned on a promise to "keep our city safe and provide equal justice for all," "to rebuild trust" and "to keep open lines of communication."

McCann's syrupy sweet talk is a sick, twisted and deadly crock. The Mile High City's homicide rate is at a record high; aggravated assaults are skyrocketing. COVID lockdowns decimated local businesses, but roving "homeless" agitators took over downtown Denver and turned it into a riot-friendly, drug-addled, violence-wracked empire. McCann vindictively prosecuted besieged motorist Jennifer Watson, who was attacked by George Floyd rioters blocking downtown streets, instead of prosecuting the thugs; a jury acquitted her on McCann's most overblown charges.

As many law-abiding citizens and I learned the hard way in July 2020, you can't hold a "Back the Blue" rally downtown in Civic Center Park without getting ambushed and beaten bloody while cops stand by and do nothing. And as more patriots learned just a few months later in October 2020, you can't peaceably assemble to support law and order without the risk of getting harassed by professional agitators, stalked by leftist media and killed. Last week, just as the high-profile case involving the assassination of Colorado patriot and cowboy hat-maker Lee Keltner was headed to trial after a 17-month delay, Progressive Prosecutor Beth McCann dropped murder charges against Matthew Dolloff, the Occupy Wall Street /Antifa/ Black Lives Matter sympathizer who fraudulently and illegally posed as a "security guard" for liberal local news station KUSA-TV ("9News") before shooting Keltner in the face at point-blank range with a gun that the news station denies knowing he was carrying.

After initially charging Dolloff with second-degree murder, Progressive Prosecutor McCann has now magically determined that "we are not able to prove guilt beyond a reasonable doubt." She will move to drop all charges at a pretrial conference next Monday and splattered the news across the local media before all members of Keltner's immediate family had been notified.

So much for rebuilding "trust" and those "open lines of communication."

"Lee's life mattered," his mom, Carol Keltner, told me this week. "The family is devastated" by McCann's shocking decision. "There will be no justice for my son," she lamented. She is urging Coloradans to join her daughter and Lee's sister, Suzan, this coming Monday, March 21, at 10 a.m. at the Denver Courthouse on 520 W. Colfax Ave. for a peaceful rally in Lee Keltner's name. Suzan Keltner told "Denver in Decay" documentarian and KNUS radio talk-show host Steffan Tubbs that the DA's office had initially informed her family last fall that the prosecution was "in essence, a slam dunk case."

What changed? Well, just like the "science" now tells the COVID-19 tyrants that masks and lockdowns are no longer necessary in the midst of a heated political campaign season, the "law" now tells McCann that Lee Keltner's murder was not murder—despite her office failing to interview key witnesses about what they believe was a coordinated ambush involving Dolloff, BLM radical Jeremiah Elliott and 9News producer Zack Newman.

Lee's friend and witness to his murder, Steven Wright, calls KUSA's activist journalists "the 9News hit team" and told me he vows he "will not stand down" until the whole truth of Keltner's death is exposed. The station has a history of fomenting hatred against conservatives, including mocking those of us attacked at the July 2020 Back the Blue rally, and sneering at and smearing those who attended John "Tig" Tiegen's peaceful October 2020 "Patriot Muster," where attendees were harassed by Antifa and BLM agitators as they departed—up to and including the moment Lee Keltner was stalked by Elliott, with Dolloff and Newman trailing nearby, while cameras rolled.

Elliott was captured on video running from the murder scene, gloating about "one less white supremacist" and "f--- yeah, right in the f---ing dome."

Wright left several unreturned messages with the DA, informing them that, "You don't have all the facts. This entire ambush was around a violent episode that was premeditated. Once the cameras came out, Elliott went full idiot. This was exactly 9News' objective. Depose me."

"We believe Lee was targeted," sister Suzan told YouTube podcaster Madyson Marquette last week. But after "begging and pleading" with prosecutors to move forward, Suzan Keltner was told McCann's office would not let a jury of Lee's peers hear the evidence.

What changed? Tubbs told me: "Several witnesses have told me that though they made themselves available, they were never interviewed by police or the DA's office. Denver District Attorney Beth McCann is a disgrace to her profession. She caved likely due to media attorneys and fear of being canceled. ... This could have been delivered to a grand jury. Dolloff should have at minimum faced a jury of his peers. Let them decide. ... I hope Monday's rally sends a loud (peaceful) shock wave to the idiots in downtown Denver."

And a warning for the rest of law-abiding America: Beware the Progressive Prosecutor who delivers "justice" for some, retribution against patriots, cover for media propagandists, and a Third World hellhole to the taxpayers who fund her paychecks.