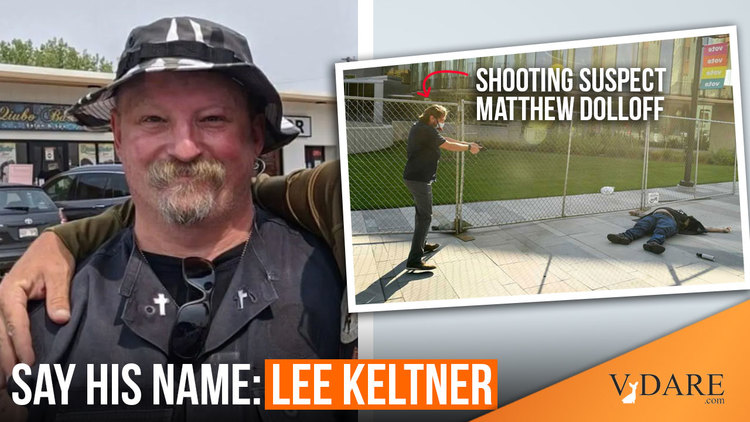 Earlier by Michelle Malkin: A Media-Political Assassination in Denver

Dear Lee: I never had a chance to meet you. But I will never forget you—and I will do my best to ensure that you are not forgotten.

As the owner of Crossfire Hats in Brighton, Colorado, your craftsmanship and artistry were renowned—and you garnered local media attention for your success for over two decades in the highly specialized business. You told one interviewer that your work making custom cowboy hats was "keeping the West alive, one hat at a time" and that your products represented the "history of the West." You said you were a "country boy" who "love(d) being an artist."

Your friend and fellow hatter Steven Weil, owner of Rockmount Ranch Manufacturing Company, told KDVR 31 News that Lee Keltner was "a Western guy, he followed the cowboy code." He praised you as "a man of integrity" and "honest person."

You were a beloved grandfather and father. Your sister Suzan noted that you "served our country" as a U.S. Navy veteran. Your friends said you were the "guy that would give you the shirt off his back" and a "patriot."

You were a family man, a self-made entrepreneur and artisan, a motorcycle enthusiast, and a salt-of-the-earth American who took pride in his community, his craft and his country. My kind of people.

The rally went off smoothly—until attendees began to disperse and return to their cars. Tiegen's men had come trained and prepared to defend their supporters after the violent Back the Blue rally that I attended three months earlier in July 2020 with hundreds of others at the very same Civic Center Plaza was shut down by violent Antifa and Black Lives Matter vigilantes wielding metal rods, skateboards and megaphones to threaten and assault law-abiding citizens.

Remember: The Denver police union president Nick Rogers blew the whistle on how top brass (led by a police chief who marched arm in arm with BLM last summer) issued a retreat order while the mob trampled our constitutional rights to free speech and peaceable assembly.

But despite Tiegen's preparation, better police presence and barriers that kept rioters from invading the plaza, one man didn't make it out alive:

Lee, you weren't able to see or know that an agitator named Jeremiah Elliott had been antagonizing your fellow patriots throughout the end of the event as they walked back to their cars. From multiple pieces of video footage and from witness accounts I gathered, Elliott was menacing and hateful. He had a history of left-wing agitation, including leading an anarchist Antifa/black bloc mob outside a Denver police station a month before the Patriot Muster.

As I previously reported, Lee, while Elliott trailed you, a Trump-hating Occupy Denver radical named Matthew Dolloff and a local NBC affiliate investigative producer for Denver's 9News named Zack Newman conferred with each other nearby. At some point, Dolloff handed his cellphone to Newman.

Minutes later, photographers and videographers filmed the agitator aggressively daring Keltner to deploy a can of bear spray he was holding to protect himself as Dolloff and Newman stood by closely. At first, Lee, you resisted engaging in any physical brawl as the agitator escalated. Mere seconds later, you walked away from the agitator only to walk right into what appears to be a deadly ambush with Dolloff. In an instant, Dolloff appeared to grab for something on your chest while you slapped defensively at his face. Dolloff then immediately whipped out a gun and shot at your face as you sprayed the repellant in self-defense.

I repeat the questions I asked in the aftermath of what I believe was a media-political assassination, Lee, so they and you will not be forgotten:

Lee, your friend Steven Wright, who was with you in your last waking moments, continues to push for truth and justice in your case. He told me recently: "Lee Keltner and I specifically discussed you, Michelle." Steven said you told him that "no one will hurt her again" and that the riot at the July "Back the Blue" event "had a significant impact on me and Lee Keltner."

Lee, I will never get to say "thank you" to you. But I vow in 2022 to make sure that "never again" is your legacy and that your name and courage are not forgotten. God bless you, patriot.